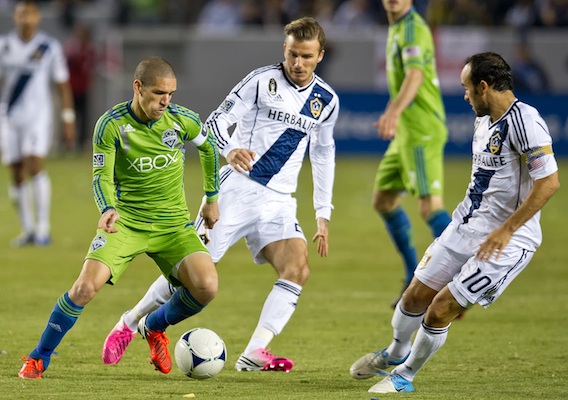 We Name the 11 Best Players in Cascadia

The Pacific Northwest boasts three of the best-supported clubs in Major League Soccer. There's some pretty good talent playing for those three teams too. Here's our take on an All-Cascadia Best XI.
ASN Slideshow

BY Liviu Bird Posted
March 13, 2013
11:17 PM
Editor's note: See all 11 players in action with our slideshow, at right.WITH THE CASCADIA CUP kicking off its 2013 edition on Saturday, another season of debate and battle among the three Pacific Northwest Major League Soccer teams can begin. To help stir up some discussion, we have put together an All-Cascadia Best XI. One good game is not enough to earn a spot on this team, so Sounders FC defender DeAndre Yedlin and Whitecaps midfielder Kekuta Manneh are not eligible. Not yet. The one new signing on this list, Diego Valeri, has proven his worth quickly. Beyond picking out the best 11 individuals from the Vancouver Whitecaps, Portland Timbers, and Seattle Sounders FC, this list also shows where the strength of each team lies on the pitch. Vancouver is strongest in the back, Portland in its playmakers, and Seattle out wide and at forward. It also shows their weaknesses. Without Osvaldo Alonso and Michael Gspurning, the Sounders would be badly exposed in the back. Portland already has been a few times this season, while Vancouver has seen multiple attacking chances go begging because of finishing problems. Of course, multiple players could fit in multiple positions in a Cascadia XI—but the idea here is to discuss, not pigeonhole. So take a look at this list, and tell us where we went right, where we went wrong, and whom you would put on the field.

Michael Gspurning (Seattle Sounders FC)
Of the three starting Cascadia goalkeepers (perhaps four if you consider the back-and-forth in Vancouver between Joe Cannon and Brad Knighton), Michael Gspurning is the most consistent performer. Especially in the 2012 MLS Playoffs, his ability carried Seattle as far as it went, supremely evident in a great goalkeeping duel with Real Salt Lake’s Nick Rimando in the Conference Semifinals.

Alain Rochat (Vancouver Whitecaps)
Alain Rochat played often in the midfield for Vancouver last season, but a move to outside back has seen him have more of an impact in the attacking third in this young 2013 season. Both Vancouver and Portland like their outside backs to attack, but the Whitecaps players have had more of an impact so far. Jay DeMerit (Vancouver Whitecaps)
Even though he is injured, Jay DeMerit is still likely the best center back in the northern I-5 corridor. The Whitecaps were in the playoff match last year with the Los Angeles Galaxy until DeMerit had to leave with an injury—at which point it all fell apart. Andy O’Brien (Vancouver Whitecaps)
A big part of the reason Vancouver won’t fall apart again without DeMerit is Andy O’Brien’s experience right next to DeMerit’s usual position. O’Brien’s veteran presence has a calming effect on the middle of the Whitecaps defense, and he will continue to lead while DeMerit is out and Brad Rusin gets his bearings in MLS. Lee Young-Pyo (Vancouver Whitecaps)
Rounding out an all-Vancouver back four is the ageless Lee Young-Pyo, who at 35 is entering the last year of his contract and will likely retire at the end of the season. In the meantime, Lee will continue bombing down the right flank for the Whitecaps, causing opponents more trouble in attack than a lot of wingers.

Osvaldo Alonso (Seattle Sounders FC)
Especially with outside backs who like to get forward, a holding midfielder who can sweep up in front of the center backs is vital, and Osvaldo Alonso provides just that. It is largely due to his and Michael Gspurning’s presence that the Sounders get away with pedestrian defending at times. The MLS Best XI midfielder is the best ball-winner in the league, and his take-no-prisoners approach also makes him a great leader. Darlington Nagbe (Portland Timbers)
Caleb Porter has taken to using Darlington Nagbe as a wide midfielder, but he can also play in the middle. He tends to drift centrally to create most of his opportunities anyway, and his ability on the ball combined with deadly finishing from distance gives him one of the most dangerous skill sets at this position in the league. Nagbe is currently a Liberian citizen, but if he gets his American citizenship, he is primed for a U.S. appearance. Diego Valeri (Portland Timbers)
Diego Valeri has taken up a freewheeling role under the target striker for the Portland Timbers this season. He checks back to find the ball deep, makes runs off Ryan Johnson to get in behind, and can also keep possession when necessary. He’s only on loan in Portland, but making Valeri’s deal permanent must be a priority for the Timbers organization.

Steve Zakuani (Seattle Sounders FC)
After returning from a horrific leg break, Steve Zakuani is back to his old self this season. He can move just as quickly, and his creativity in one-on-one attacking allows him to get behind defenders and cut crosses back into the penalty area. With Zakuani and Mario Martinez’s speed and Mauro Rosales serving ability, Seattle will be deadly from wide areas this year. Eddie Johnson (Seattle Sounders FC)
Eddie Johnson, ranked N0. 20 in the ASN 100, scored nine goals with his head last year, showing both his skill and how much Seattle relies on finishing off crosses to get on the board. Johnson’s acquisition in Seattle received a mixed reception as he was traded for two fan favorites, but his performance has quickly erased all negative feelings—both in town and around the country. Mario Martinez (Seattle Sounders FC)
Recent form has Mario Martinez quickly gaining favor from the biggest fan base in MLS. He scored the decisive goal against Real Salt Lake in the playoffs last year, and he partners well with Steve Zakuani on the other flank. Martinez’s performance has been good enough to push Mauro Rosales out of his normal spot in the Seattle starting lineup this season, and he terrorized the United States defense in Honduras’ Hexagonal opening victory. Honorable Mentions: Darren Mattocks and Gershon Koffie (Vancouver Whitecaps); Kalif Alhassan and Diego Chará (Portland Timbers); Brad Evans and Mauro Rosales (Seattle Sounders FC). Who would you select as your Cascadia XI? Post a comment below and let us know. Liviu Bird is a freelance soccer journalist based in Seattle. Follow him on Twitter.