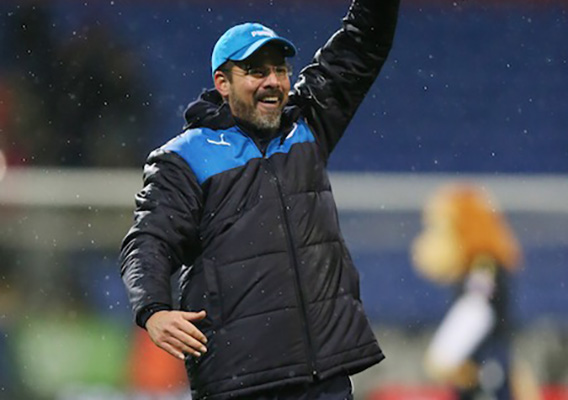 David Wagner added yet another impressive feat to his managerial career with Huddersfield by ensuring safety. Elsewhere, Chicago's USL team makes a splash, Rooney nears DC United deal, Andrija Novakovich scores a big goal for Telstar, and much more.
BY Brian Sciaretta Posted
May 10, 2018
7:00 AM
IT HAS BEEN A very busy midweek in American Soccer with the Open Cup, MLS, youth national teams, and players abroad all in action. So ASN is here to break it down.


It is hard to believe that one of the fastest rising managers right now in Europe once played for the U.S. national team. But it is true. There is little doubt that David Wagner will be landing a managerial position with a big club sooner than later with what he has done with Huddersfield – the smallest club in the Premier League.

After working with Borussia Dortmund under his best friend Jurgen Klopp, Wanger took his first head coaching gig three years ago at Huddersfield. In his first season he helped the club avoid relegation out of the Championship. Then he led the club to an unthinkable promotion into the Premier League. Yesterday, his Huddersfield team played to a 1-1 draw with Chelsea to formally clinch safety in the Premier League after most expected them to go down.

David Wagner, 46, might not be interested in the U.S. national team gig right now. That makes sense. His stock is so high at the club level that he should definitely hold out for a huge job that could possibly come his way. But U.S. Soccer would be wise to build a relationship with Wagner so that maybe in future cycles he would be interested.


Massive congratulations to former #USMNT forward David Wagner for another impressive accomplishment in his managerial career. First saving Huddersfield from relegation out of the Championship, then getting the team promoted, now keeping them in the EPL in their first year. pic.twitter.com/8BFX75DQGT


In Holland, Telstar is seeking a promotion to the Eredivisie through the playoffs and its leading scorer this year has been U.S. national team forward Andrija Novakovich – who is at the club on loan from Reading in England.

On Thursday, Telstar defeated De Graafschap 3-2 in the first leg and Novakovich scored the team’s second goal for a 2-0 lead. The Wisconsin native now has 21 goals in 37 games in all competitions for Telstar this season.


After defeating Kazakhstan 8-0 and Ukraine 2-1 at the Slovakia Cup, the U.S. team lost to the Czech Republic on Thursday 3-1 to finish in second place in its group behind the undefeated Czechs. The team will now face Azerbaijan on Friday in the third place game


There are conflicting reports right now about Wayne Rooney and his potential move stateside to join DC United.

The Washington Post is reporting that the deal is inching forward but is still not near completion. Sky Sports in England, however, has said an agreement in principle has been reached for the Everton forward.

Rooney, 32, would be a blockbuster for DC United, which needs both goals and attention as it prepares to move into its new stadium. Rooney would likely solve both issues and is coming off a season where he scored 10 goals for Everton in 2017/18.

There is no question that MLS teams have gone younger in recent years with its high-profile signings. Ezequiel Barco and Diego Rossi are more of the norm than Zlatan Ibrahimovic or Rooney. But when a player like Rooney signs with the league, it does create a very real image of a “retirement” league despite the fact that the actual evidence points otherwise.

That isn’t to say that the older players who have come here haven’t been helpful to the league or its teams. Yes, Frank Lampard, Steven Gerrard, and Andrea Pirlo were so far past their prime that they never contributed meaningfully. But Thierry Henry and David Beckham were huge assets that helped the Red Bulls and the Galaxy immensely.

If Rooney can score goals and help turn around a woeful DC United team, everyone will be happy.


The new USL Chicago team made headlines on Wednesday when it revealed that Chicago Cubs owner and Chairman, Tom Ricketts, would buy a majority share and be involved with a new state-of-the-art 20,000 capacity stadium in the Lincoln Park and Bucktown neighborhoods of the city.

Does anyone think that this project, with such a huge investment and high-profile owner, has an eye towards a USL team and nothing beyond? Possibly, but that is really hard to believe.

Can anyone really imagine a situation where a USL team has a better stadium in a much better location than an MLS team plays in the same metropolitan area?


MLS had a series of games on Wednesday. And there was some news, both surprising and unsurprising.

Predictably, the Philadelphia Union continue to be offensively inept and it is easy to see a situation where Jim Curtin might not survive this. This team is completely underperforming in its front six despite having well established players – and right now it is hard to see that stopping anytime soon.

For technical director Earnie Stewart, it certainly does hurt his case to be the next U.S. national team general manager as he is one of the candidates.

The big surprises of the night were the home losses suffered by Toronto FC and Atlanta United.

Atlanta United has such amazing offensive firepower that home shutouts are eye-opening. Brad Guzan’s first half red card made it a lot harder on Atlanta but full credit has to go to Sporting Kansas City’s veteran defense which has this league figured out.

Peter Vermes’ strategy has been simple of over the years: get a solid defensive core that operates well in the league and run with it. Here, goalkeeper Tim Melia is one of the best in the league and the central defense tandem of Ike Opara and Matt Besler will essentially shut down most opponents. There is nothing young or exciting about it. It just works.

Meanwhile, Toronto FC’s home loss to Seattle is surprising on so many levels. Seattle has been very poor offensively all season long. Meanwhile, Toronto FC put themselves into a huge hole when fielding second-string lineups in the league to focus on the Champions League. Everyone figured the defending champions would dig out of it. Perhaps they will – even without the injured Jozy Altidore, Toronto has a ton of talent.

But 2-1 loss at home to a bad offensive team suggests that Toronto will have to really bear down to make a climb. With the loss, Toronto has just seven points from eight games and is in 10th place out of 11 teams in the Eastern Conference. It is nearing a point where it simply won’t be able to avoid bad losses.