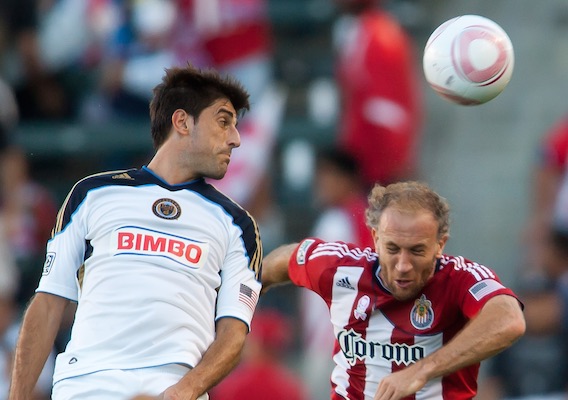 THE CHICAGO FIRE is a team in transition.

In 2015 it finished with the worst overall record in the league, prompting the club to clean house with players and front office executives alike. The first major decision new general manager Nelson Rodriguez made was to hire a new head coach, and after many familiar American soccer names were considered, Rodriguez went with an out-of-the-box hire in Veljko Paunovic—a former Serbian international who played with clubs such as Atletico Madrid, Getafe, and Tenerife and ended his career in 2011 with the Philadelphia Union.

Since then, Paunovic, 38, has coached Serbian youth national teams and recently led Serbia to the U-20 World Cup title last summer. The Fire will be the first professional team he has coached. The following interview has been lightly edited.

BRIAN SCIARETTA FOR ASN: After winning a U-20 World Cup, you certainly had options in terms of your first professional coaching job. Why the Chicago Fire?

VELJKO PAUNOVIC: For me it's always very important to know the people who I am going to work with. I met with Nelson a long time ago, so we created a very good relationship in terms of having the same passion for soccer and sharing the same vision about players and style. That was one of the most important things. And with Chicago, from the time I played in MLS, I found it an interesting experience, even though I played only once here. I saw the potential this city and this community has in terms of how it can grow into a great soccer environment. From the point of view of the league, that's another very important thing why I chose Chicago—because of the continuous growing of the league, the expansion, and the potential that this league and this country has in terms of the great soccer country the people here want to become.

ASN: What is it going to take to turn this team around? What has been missing?

PAUNOVIC: It’s the vision we have, and we want to make it a great vision. The point is that we need the right people and we have to build the right roster. We now only have 13 players, so this is the moment where we are building our team, and there are possibilities we can bring the players with a profile we believe can satisfy our criteria in terms of the style of play we want to develop in the coming season. That style of play will be where we will be building out of the back, trying to always play in the opponent’s half of the field. That’s the basic idea, but we have to be able to adapt to all the circumstances of the game and all the changes that happen. This is what we’re looking for—the right players to build the style of play where we can be dominant. We never want to be inferior to anything.

ASN: How do you define the type of player you’re looking for?

PAUNOVIC: Good athletes. Players that have a very defined and clear soccer culture and style of play. They have to have a good understanding of the game from a tactical point of view. Of course all these things together are very important. So it’s not as if we will find a guy who is 100% in that criteria. But what we are going to do is detect those guys who have that potential and work with them to develop that potential and those qualities we believe are very important. Right now we are working on our defensive line and our center backs.

ASN: Did your time in the league influence your decision to coach here? What did you take away from that experience?

PAUNOVIC: The people here want this sport to become what it is perhaps in Europe or the rest of the world. I would not say it is the most important sport, but it’s a very important sport here. It’s a sport where people will identify and feel great about going to the stadium and watching their team play. That’s what I felt: this huge passion to develop this sport to its full potential that the rest of the world has already achieved. Of course, then comes great organization, great environment for the sport. In the United States, for me it’s one of the biggest countries for sports. I think all this evidence was very important for me to make that decision to come back and accept this great opportunity.

ASN: Don Garber has said repeatedly he wants MLS to be one of the biggest leagues in the world within a decade, and U.S. Soccer has also taken steps it hopes will help the men’s national team be among the best in the world. Do you think that’s attainable?

PAUNOVIC: Absolutely. I think within the next five to 10 years it can be achieved, and from my perspective I want to help reach that goal. I think that I have knowledge and experience and most of all a huge passion to share it. I would like to be someone who can help achieve it.

ASN: This past summer, you coached Serbia’s U-20 team to the World Cup title. In the quarterfinals, you beat the U.S. in a very close and hard-fought game. What were your impressions from that game regarding the next generation of American players?

PAUNOVIC: Well, I expected to see what I saw—a team that was playing together with good individual qualities and an idea of how they wanted to perform. I expected to see this from great coaches like Tab Ramos and his staff. That was a great game. The soccer culture is growing in the United States, and I saw that change in just the four years since I was playing here.

ASN: FC Dallas has made heavy investments in its academy. How big of a role is the academy going to play for the Chicago Fire in your tenure?

PAUNOVIC: We want to build right now a real connection between the academy and the first team, but obviously we are concentrated on our first team this month. We still need to work on that, and we are open to sharing our experiences and knowledge with the coaches in the academy and share our vision about the players. We have a project we want to do in the next few years, and that is to build an individual program for any player that they have to follow. We hope that will make them improve to reach their potential.

ASN: Can the Fire qualify for the playoffs in 2016?

PAUNOVIC: I think every year, from what I’ve seen in MLS, everything starts from the start. Basically, we are working on building our team. We’re trying to find the right people and players to fit our style. I truly believe we can improve our team, and our first goal is to make all the numbers from last year improve. For the playoffs, I believe we can get to that point, but right now what we are thinking about is doing the first steps well: select players, then prepare them, then we will set up our goals for the next season.