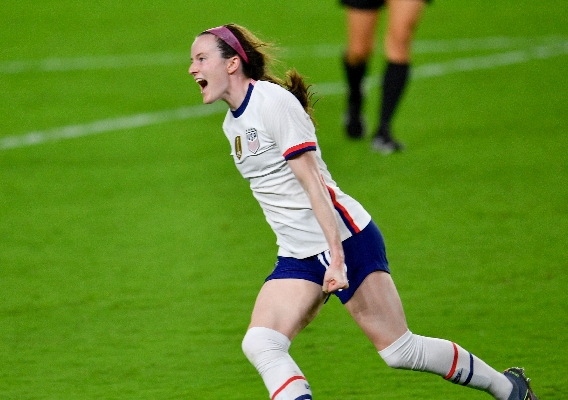 It was harder than expected for the USWNT in its SheBelieves opener as a shorthanded Canada team hung in the game until the 80th minute when Rose Lavelle scored the only goal of the game. ASN's John Halloran recaps the win.
BY John Halloran Posted
February 18, 2021
5:30 PM

IN THEIR OPENING match of the 2021 SheBelieves Cup, the United States women’s national team defeated Canada 1-0.

To start the contest, head coach Vlatko Andonovski elected to start with a forward line of Megan Rapinoe, Carli Lloyd, and Lynn Williams and left Alex Morgan and Christen Press to come off the bench as second-half substitutes. In the midfield, Catarina Macario got the start with Kristie Mewis and Rose Lavelle also entering the game as substitutes later in the game.

While the U.S. dominated the contest for long stretches, a combination of substandard finishing and defensive errors made the game dicier than most had expected. In fact, Canada entered the tournament missing seven regulars with some clubs refusing to release players due to COVID-related quarantine protocols and others missing due to injuries. To make matters worse, Canada then lost their starting goalkeeper only 10 minutes into the game against the U.S. due to injury.

In the first half, a series of long passes out of the back from Abby Dahlkemper helped open up multiple attacks for the U.S., but they were unable to capitalize. Catarina Macario—in a subpar performance—had two opportunities early in the stanza, losing one due to a poor touch and then wasting a gilt-edged chance set up by Williams wide of the net in the 20th minute. 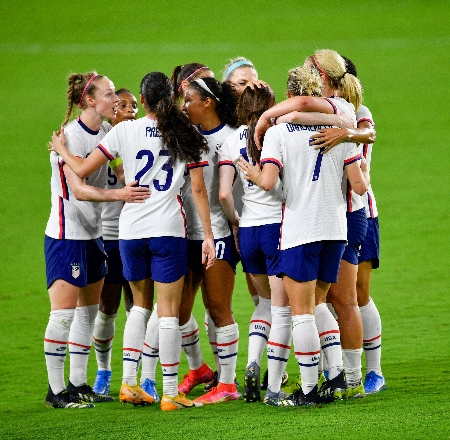 Another Williams service 15 minutes later nearly resulted in the opener for the U.S., but Canadian keeper Stephanie Labbe tipped Carli Lloyd’s header just over the bar. And, only a few minutes after that, Canada almost made the Americans pay for their missed opportunities when Janine Beckie found herself alone on the back post with the ball at her feet. Only an Alyssa Naeher save kept the game level at 0-0.

Lloyd and Williams, in particular, demonstrated a tremendous work rate to continue pressuring Canada’s backline, but when the U.S. was in possession, the Canadian defense stymied possession after possession. Allysha Chapman, Canada’s left back, impressed, and repeatedly stopped Purce and Williams from creating opportunities down the U.S.’ right flank.

Before the halftime whistle, Williams had two chances from distance, forcing Labbe into an excellent diving save on the first, but firing the second right at the Canadian goalie. 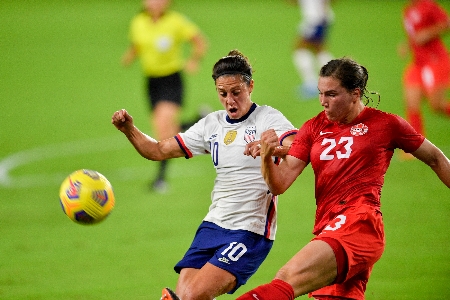 After the break, the Americans continued to generate chances with both Lloyd and Pinoe getting looks, but both were unable to capitalize and Canada continued to pressure the U.S. backline. In the 51st minute, Nichelle Prince got in on a counter and nearly created a chance when she beat Dahlkemper on the dribble and Becky Sauerbrunn elected to cut off a passing lane and not close Prince down.

Almost immediately, Prince had another opportunity when an errant Crystal Dunn back pass gave her the ball in on goal again. Prince then fed Beckie—who found herself 1-on-1 with Naeher for a second time—but the American netminder was again up the task.

From there, the two sides went back and forth on chances. Midge Purce handled the ball in the box stopping a cross in the 73rd minute, but the U.S. got lucky when the center official either missed the contact or deemed it not sufficient for a penalty. Then Horan hit the crossbar on a break going the other way shortly thereafter.

The Americans finally found the breakthrough, and the game-winner, in the 79th minute. Adrianna Leon fouled Purce in the attacking third and on the ensuing service Lavelle latched onto a loose ball with her right foot to hammer in a goal.

After the match, Andonovski appeared irritated with the team’s performance and lamented the squad’s missed chances. In total, while the U.S. did come out with a win, it took a bit more luck than it probably should have against a weakened Canadian team. And with a roster chock full of options, more than a few American attackers didn’t do anything to improve their chances at making a tight Olympic squad.

The U.S. plays its second match of the tournament on Sunday against Brazil at 3 p.m. ET on FS1.