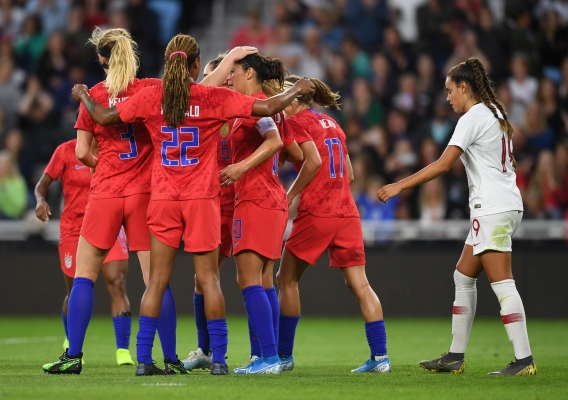 The USWNT continued it's impressive winning streak with a convincing take down of Portugal at Allianz Field as part of its Victory Tour. ASN's John Halloran is here with his thoughts on the game and the tour .
BY John Halloran Posted
September 03, 2019
10:00 AM
THE UNITED STATES women’s national team defeated Portugal 3-0 on Tuesday night in front of a sellout crowd of 19,600 fans at Allianz Field in St. Paul, Minnesota.

The American win in its third Victory Tour match came on the back of two goals from Carli Lloyd and one from Lindsey Horan and represents the 16th win in a row for the U.S. team.

DOES CARLI LLOYD STICK AROUND FOR 2020?


Not so long ago, it looked like the Carli Lloyd-era with the U.S. women was nearing its end. Lloyd had lost her spot in the American midfield to a group of younger and more technical players who had a skill set that Lloyd simply could not match.

Then, Lloyd did something few expected. She reinvented herself as a forward.

For years, the U.S. had struggled to find a replacement in the No. 9 position when Alex Morgan was unavailable—even more so since moving to a 4-3-3 in 2017 and transitioning Morgan into the role of a holdup striker.

Blessed with a plethora of attacking options, the Americans still lacked a player who could replicate Morgan physical play, winning balls up top, holding possession, and getting on the end of flank service into the area.

In that role, Lloyd has become nearly indispensable for the U.S. and, on Tuesday, scored the first two goals to help lead the team to another win. In the team’s other match against Portugal late last week, Lloyd added another goal and an assist.


Honestly, pick a sport. @CarliLloyd is a baller in all of them. pic.twitter.com/tQhROo1XM1

Years ago, and still basking in the limelight of her 2015 World Cup performance, Lloyd targeted the 2020 Olympics as her final tournament. However, this summer in France—playing largely as a backup—she seemed far less committed to continuing her play into next summer.

Olympic rosters are smaller which makes roster decisions much more difficult for a coach. But Lloyd’s ability to continue to contribute—as well as other teams consistently targeting Morgan with physical play and exposing her to injury—creates a strong case to keep the 37-year-old in the picture until next summer’s Olympic Games.


Most people after turning 30: It's all downhill now.@CarliLloyd: Scores 81 goals (and counting). pic.twitter.com/60azhzyjtA


THE DUBIOUS VALUE OF THE VICTORY TOUR


There is value in honoring the U.S. women’s World Cup victory this past summer. The players make more bonus money, the fans get an opportunity to watch the team in more American cities, and the team’s fourth World Cup win is fully celebrated.

The match on Tuesday in Minnesota was a sellout. The match last week in Philadelphia set an all-time mark for a friendly with 49,000 fans. The first Victory Tour match back in August brought in 37,000 people.

All of these are good things.

However, from a more practical perspective, the Victory Tour presents numerous hurdles. Many of the American women are injured, including Alex Morgan, Rose Lavelle, Kelley O’Hara, and Megan Rapinoe. Many others are carrying knocks of varying degrees that aren’t severe enough to keep them off the field. All of them are thoroughly exhausted.

At a time when the players have just returned to their NWSL clubs and need rest more than anyone else in the league, they are getting less time off with these call-ups. That also means more travel, more practices, more minutes—and potentially even more injuries.

It also means the players will be far less likely to be at their best for the run-in to the NWSL playoffs at a time when focus on the league is greater than any other time in its history. Die-hards might not want to admit it, but the majority of casual fans—the ones helping set attendance record after attendance record over the past few weeks—are coming to games to see their favorite U.S. superstars. And if those players are hurt, or not playing well because they have been worked beyond their limits, that harms the league.

With head coach Jill Ellis leaving soon, the Victory Tour matches have even less value. In 2015, Ellis could—at the very least—use the matches to look at new formations, tactical ideas, and new combinations of players. In 2019, there are no tactical lessons to be learned, no clues or hints to be gleaned about the team moving forward. The games are purely exhibition matches with no tangible value towards prepping the team for the 2020 Tokyo Olympics.

SPEAKING OF A NEW COACH

Foudy even went further, naming Andonovski as the insider favorite at the moment.

Andonovski is a popular coach in the NWSL with a reputation as a “player’s coach.” He also has two championships, winning the league in 2014 and 2015 with FC Kansas City.