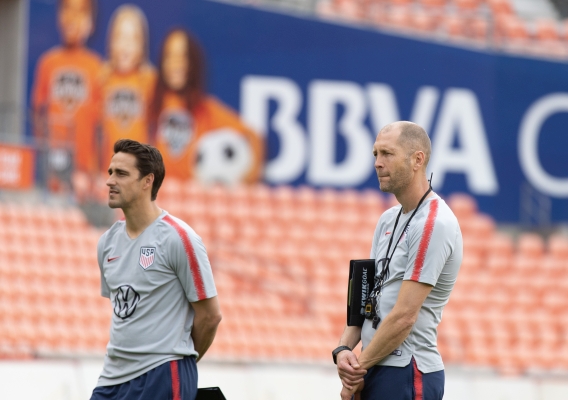 There was a ton of midweek news in American soccer involving the full national team, the U-20 national team, transfer rumors, and retirements. ASN's Brian Sciaretta looks at it all.
BY Brian Sciaretta Posted
May 22, 2019
10:50 AM
THERE HAS been a waive of midweek news in American soccer this morning and so much of it is youth oriented. The USMNT will have a youthful pre-Gold Cup camp, the U-20s have made a roster change, and we have some farewells to say to some players who will be hanging them up.


The U.S. national team will hold a camp from May 26-June 2 in Annapolis, Md. that will consist of a combination of players who are on the 40 player preliminary Gold Cup roster as well as a few not on that list but who are also eligible for the U.S. U-23 team.

Emerson Hyndman remains the one exception who is not on the preliminary Gold Cup roster and who is not eligible for the U-23 team.

On June 1, the players not on the preliminary Gold Cup roster will depart and the rest of the players eligible for the tournament arrive. The U-23 team will then have its own camp from June 10-16 in Salt Lake City.

The final 23-player roster for the Gold Cup is due on June 5.

Overall the roster includes many of the familiar faces of U-23 team pool although many players who are still playing like Jackson Yueill, Auston Trusty, Frankie Amaya, and Brendon Aaronson are playing regularly for their team and are not released.

This camp allows Berhalter to work with some of the U-23 players and some other players new to the system (Gutman, Amon, etc). In addition, having some veterans like Tim Ream and Matt Miazga should elevate the level of play at the camp.


United States U-20 national team head coach Tab Ramos had to make one change as Ayo Akinola was forced out with what was listed as an ankle injury. He was replaced by LA Galaxy right back/defender Julian Araujo.

Araujo, 17, is a welcome addition as Ramos only had six defenders on the team and Araujo will provide cover in both central defense and right back.


On Tuesday it was also announced that Philadelphia Union central defender Mark McKenzie was named the captain of the U.S. U-20 World Cup team.

For Ramos and the team, it is a great choice as McKenzie has been a steady presence all cycle and was very strong throughout qualifying.

“Mark is a natural leader,” Ramos said. “First of all, he’s a hard player on the field and he’s a good player. Secondly, he has that charisma off the field that allows for him to have a voice and for people to follow that voice. I think the important part is that he’s a good representative of U.S. Soccer and what we stand for, for doing the right thing all the time, for working hard and for being someone that the younger guys can look up to.”

“I pulled together all the leaders of this group and we made the decision together,” Ramos said. “Everybody agreed that Mark is the guy to lead the way.”

McKenzie will now follow in the lines of recent U-20 World Cup captains Erik Palmer-Brown and Emerson Hyndman.

If true, this would be a great move for Amon who is still developing his game. The Belgian league is a step up from Denmark but it is not too drastic either. It is a level where Amon should still earn regular minuets. Plus Brugge, which employs U.S. national team goalkeeper Ethan Horvath, will be playing in the UEFA Champions League qualifiers so there should be heavy squad rotation – and more opportunities for Amon.


Aron Johannsson wasn’t the only American who is leaving a top-tier club. Danny Williams penned his goodbye to Huddersfield supporters after joining the club two years ago following its promotion to the Premier League.

“So, my time at Huddersfield has come to an end,” Williams said. “A great 2 years and an enjoyable experience throughout, a massive thanks to the fans and staff who made it all possible, it is a shame for me personally that I couldn’t play as much as I wanted to this season, to help the boys to survive.
Now... we see what the next chapter is.”

Williams, 30, has struggled with injuries in recent years but when healthy, is a very good midfielder. If another Premier League team isn’t interested, Williams should be able to find work in the Championship where he was a star for Reading. He could also return to the Bundesliga or perhaps even in MLS. The same for Aron Johannsson.


A wave of high profile retirements hit this week and the most prominent is DaMarcus Beasley who is one of the most legendary figures in American soccer history. Beasley was the first American player to ever play in a UEFA Champions League semifinal but won titles in Holland, Scotland, and MLS. He also played in Liga MX, the Premier League, and the Bundesliga.


Wow.. this is a big one. 4 World Cups, countless accomplishments both domestically and abroad. If there was a Mt. Rushmore for American soccer, Beasley is on it. He definitely was a big part of chaning the game in this country. Hope he stays involved. https://t.co/DrEvuG9d8F


Sal Zizzo retired after a 12 year career. He was most recently on the Atlanta United team that won MLS Cup in December. But on a week where the U-20 World Cup is set to begin, Zizzo was on the 2007 U-20 World Cup team that was perhaps the most fun to watch U.S. youth team ever. Zizzo was a big part of it.


With Sal Zizzo announcing his retirement the same week the U-20 World Cup begins, it seems fitting to dig this one out of the archives. What a great run Zizzo made to create this goal as the US U-20 team downed Poland during the group stages of the 2007 U-20WC in Montreal pic.twitter.com/a6mfYWbLRO


And earlier in that game, Zizzo & Adu connected for another goal. Zizzo forced a nice turnover and quickly moved the ball forward for Adu. Adu with a masterful finish. Happy Trails, @SalZizzo. Enjoy retirement. That 2007 U-20 was so much fun to watch pic.twitter.com/mJnWvnjLky


Finally, three-time MLS Defender of the Year Chad Marshall announced his retirement due to injury. His last game for Seattle came on May 6.