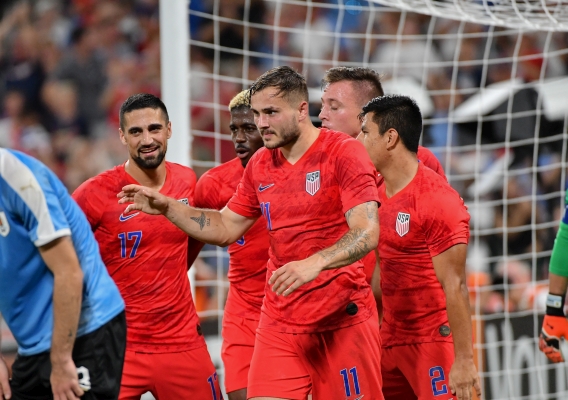 The new USMNT roster is out and there is a lot to talk about. Many of the familiar faces are back and Brendan Aaronson is the lone newcomer. But, of course, there is no Sergino Dest. ASN's Brian Sciaretta takes a look.
BY Brian Sciaretta Posted
October 01, 2019
11:00 PM
UNITED STATES national team head coach Gregg Berhalter today unveiled his 25 player roster for its first ever games of the inaugural CONCACAF Nations League against Cuba on October 11 in Washington DC and against Canada on October 15 in Toronto.

The roster consists of many of the same players who have featured throughout the year and the only debutant is Philadelphia Union midfielder Brendan Aaronson.

Here is the roster along with some thoughts.


Thoughts on the roster


This shouldn’t have come as much of a surprise to American fans that Sergino Dest was not included on this roster. He has exploded on the scene and Dutch Federation has approached him about switching. As a very young player who was born and raised in the Amsterdam area and now starts for Ajax, this must be very appealing. At the same time, he’s been involved with the U.S. program for years.

The point here is to give Dest time to make a decision and have him play for the United States because he wants to.


DeAndre Yedlin will return to the team for the first time since March. The Seattle native recently played his first game of the season for Newcastle in a 5-0 loss to Leicester City over the weekend. His inclusion will give the team more experience on the backline.

He is probably rusty at this stage but his return is welcome news for the U.S. team that needs leadership as the team has taken and will continue to take a youthful turn. Yedlin is one of the few players in the pool who is in his prime years and who has also played in a World Cup.


Perhaps the biggest surprise on the roster is the absence of Derby County midfielder Duane Holmes who has been in fine form since returning from a recent injury. He is back to starting again for Derby and should continue to be an important player for them.

Holmes was initially named to the U.S. team’s Gold Cup roster but had to withdraw due to a quad injury which kept him out for all of preseason and into the first four games of the Championship campaign.

Regarding Paxton Pomykal and Miles Robinson, the likely bet is that both will be with the U.S. U-23 team this month as it prepares for Olympic qualifying. The same can be said for many of the emerging talent from the last U.S. U-20 team such as Richie Ledezma and Alex Mendez.

The inclusion of Brendan Aaronson as the team’s lone debutant is welcome news. In addition of being a starter for a very good Philadelphia team, he has also been among the best performers at the two recent U-23 camps.

“There are two things that standout about Brenden,” Berhalter said. “The first thing is that he’s getting regular minutes, and the second is that he’s playing for a team that’s doing really well. We always look for that combination. He’s a very agile player, very aware between the lines, able to give solutions offensively and very secure on the ball. He’s another case of getting a younger guy into the program, getting our eyes on him and also letting him understand what it means to be in with the full Men’s National Team."

With U.S. Soccer also holding a U-23 camp this window, Aaronson’s success with that team allows Berhalter a chance to pull him away from that team and give him a glimpse as to what the full national team is like. He will likely return to the U.S. U-23 team soon and minutes might not come in these upcoming games, but he has shown enough promise at Philadelphia to make this a justified move from Berhalter.


It’s rare when any national team manager has all of his best players available. Injuries are always a factor at any given stage. Here, Tyler Adams, Tim Weah, John Brooks, and Alfredo Morales are still out of action for their respective clubs.

The injury to Adams is particularly disappointing because he provides the option of being the defensive midfielder that the team needs. It is still very thin at this position.


As with every camp, some players arrive while playing in strong form, others are not.

Josh Sargent and Weston McKennie are playing very well at the moment and both have enjoyed strong months for their clubs. McKennie and Schalke have won four games in a row, including a 3-1 away win over then Bundesliga leading RB Leipzig. Meanwhile, Sargent has also been playing well and was instrumental in helping Werder Bremen earn a 2-2 draw away at Borussia Dortmund.

Meanwhile, Jordan Morris has been one of the most in-form players on the domestic front. He has helped Seattle move to a point where it could finish as high as second place in the Western Conference.

Also of note, Jozy Altidore’s scoring ratio has also been among the highest in the league for Toronto FC.

Tyler Boyd is joining the U.S. team for the third time and has struggled to get going for both the U.S. team and his new club Besiktas.

Christian Pulisic is competing at one of the biggest clubs in the world at Chelsea but has quickly found himself behind others and is struggling for minutes. Can this camp offer the opportunity to get games which will provide momentum?