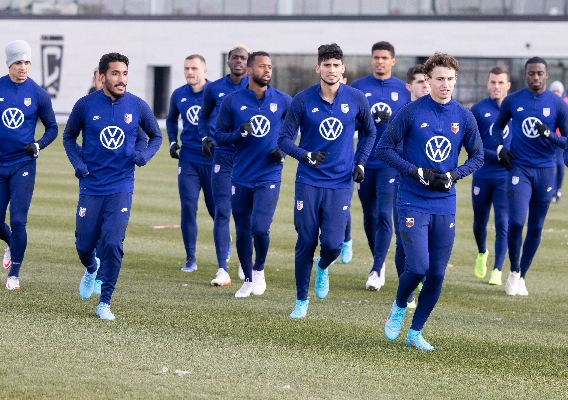 The United States is set for a battle in the cold in a critical home World Cup qualifier against El Salvador in Columbus. ASN's Brian Sciaretta offers up a preview.
BY Brian Sciaretta Posted
January 26, 2022
4:10 PM

THE UNITED STATES IS looking ahead to Thursday night’s World Cup qualifier against El Salvador in Columbus and one of the most frequently talked about topics of discussion was the cold weather – which is scheduled to be below freezing at kick-off.

The narrative coming out of the national team camp, however, has been different than one might expect. Instead of the groaning you would expect of playing in sub-freezing temperatures, players have been expressing excitement.

"It's obviously cold out here but you know something that I've been used to growing up in New York and playing Academy games throughout the winter on turf fields," Tyler Adams said. "You're used to pushing this cold to the side and being able to play and enjoy it. The cold is not going to stop us from doing what we do. If anything, it's just going to cause us to run a little bit more to stay warm."

Forward Gyasi Zardes is the player most familiar with the surroundings as he plays for the Columbus Crew and is used to the city, the climate, and the team’s beautiful new stadium. 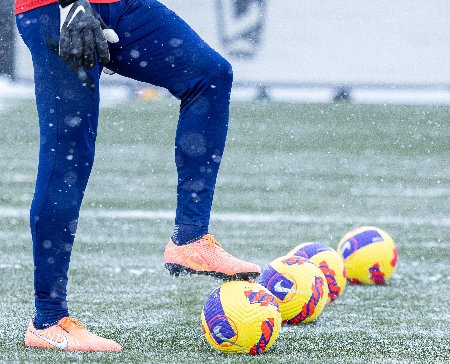 “I'm used to the cold weather now and I feel like the group we had two days to train here in Columbus and it's actually a beautiful day. The sun is out, the snow is cleared off the field, so we're embracing it. We're looking forward to playing in this weather.”

Weather for kickoff is expected to be around 28 degrees with clouds. There is the chance of snow earlier in the day before kickoff.

Central defender Walker Zimmerman took the enthusiasm to another level. He recalls watching classic games that have been played in the snow – including the “Snow Classico” when the United States defeated Costa Rica 1-0 in driving snow in a World Cup qualifier on March 22, 2013. There is also the first time the United States hosted Mexico in Columbus in 2001 which essentially started the “Dos-a-Cero” theme.

This game is unlikely to start such a rivalry as the U.S. and Mexico nor is it likely to have the accumulating snow of the Snow Classico, but it could make for a memorable night.

"I want it to be freezing. I want to be cold. I want snow,” Zimmerman said. "I want to be a part of something so iconic that I saw and really remember growing up. So, I think the guys are ready to embrace it, embrace the cold." 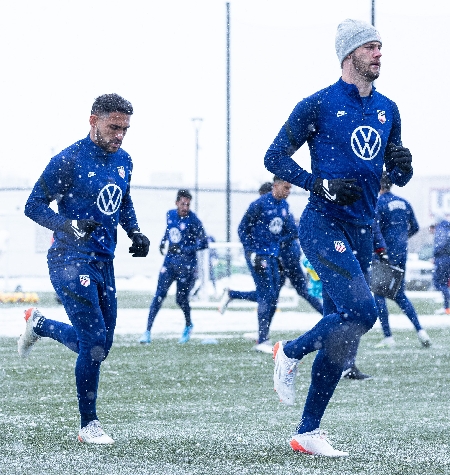 Of course, El Salvador is probably in for a rude awakening and they sit seventh in the eight-team Octagonal. The team is managed by former U.S. World Cup attacker Hugo Perez and played well at the Gold Cup but has struggled in World Cup qualifying.

The question over hos the conditions will motivate their team remains to be seen. On one hand, it could demoralize them as the team’s World Cup hopes are remote. On the other hand, it could motivate them and awaken and underdog spirit. A few of El Salvador’s players including Eriq Zavaleta and Alex Roldan (both American born) are used to playing in colder environments in MLS.

One of the more moving stories came from U.S. national team left back Antonee Robinson who was born and raised in England. While the northern United States is typically colder, Robinson once again echoed a theme of joy in playing in this weather.

“I'm not a stranger to snow,” Robinson said. “It's kind of takes me back to when I was younger. I remember Boxing Day was a big thing in my Sunday league team. We used to play dads versus lads. So all the sons would be playing against the dads on a snowy pitch. That was some of the happiest football I've ever played. Taking it back to that, it's going to be something to enjoy. I haven't played on snow in a long time. I'm really looking forward to it. I think a lot of the lads are going to embrace the conditions.”

On the flip side, while the U.S. team is embracing the cold, there is also caution that the game might not exactly be pretty.

“The conditions, they're going to be difficult for both teams,” Robinson said. “It might not end up being the prettiest game of football. It could end up being a grind. And that's why you've got to sort of switch mentality over to - you know what? I just want to grind it and I want it more than the other team.”

With the conditions not conducive to playing a pretty game, it could actually benefit El Salvador. Whether it be wind, mud, snow, cold, fog, or heavy raid – adverse conditions can serve as a way to neutralize a big talent gap.

Also, set pieces become more and more important. While the U.S. team thrived on set pieces in the summer at both Nations League and the Gold Cup (winning the final on a set piece), the team has been poor thus far in World Cup qualifying. The team has scored no goals via set pieces and has not even generated many dangerous chances. On the flip side, it has conceded one set piece goal in the 1-0 loss to Panama in October.

“Right now, we're minus one on set pieces,” Gregg Beralter explained. “We've given up one goal and we haven't scored any on set pieces. So, that is a concern. We want to be in the green, we want to be positive in that we think we have a strong team in the air. We think we have a strong team on an offensive set pieces. And we've proven that. When you think about Gold Cup or Nations League combined in the two finals, we scored four set piece goals. We know we have it in us and we just need to execute a little bit better on the offensive side. And defensively, I think we've been fine. We've been solid. We haven't given up much.” 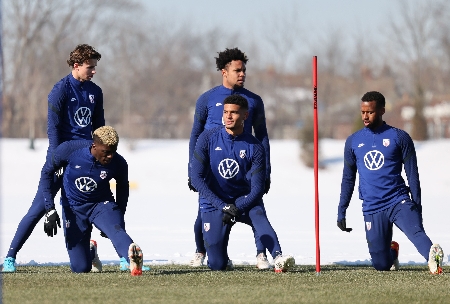 What are some of the solutions in Columbus? Walker Zimmerman is one of the best set piece targets and that could come in handy. There is also Weston McKennie who has been very good in the air this past month with Juventus. The center forward against El Salvador will either be Ricardo Pepi or Gyasi Zardes and either of them will have to be a threat. Combined with either Miles Robinson or Chris Richards as the other central defender, those are the prime set piece targets.

In terms of delivery, Christian Pulisic will likely take his share of corner kicks and free kicks. While he is usually expected to be a key contributory, set piece delivery will be an important task for him against El Salvador.

There are a few considerations heading into the game against El Salvador. Zack Steffen was still in England as of last night getting treatment for a lingering back injury. This puts Matt Turner back into the starting lineup. The New England goalkeeper is linked to Arsenal during this camp as the transfer window winds down.

DeAndre Yedlin was also late to arriving in camp after a storm in Turkey delayed his flight. The right back was recently released by Galatasaray and is mulling his next club situation. With his late arrival, it seems as if Reggie Cannon will serve as the backup to presumed starter Sergino Dest.

There are a few concerns. Tyler Adams is playing on a yellow card and if he picks up one against El Salvador, he is suspended for the Canada game. If Berhalter saves Adams for Canada, look for Kellyn Acosta to go in his place. 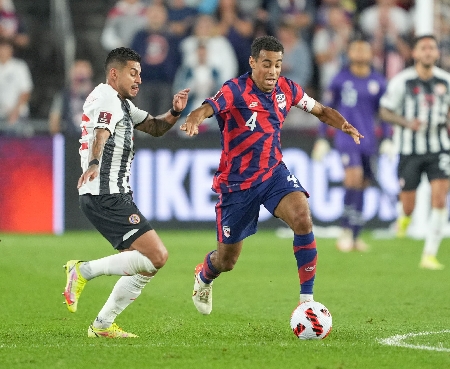 Central defense seems pretty opening and at this point, Walker Zimmerman, Miles Robinson, and Chris Richards all have a good chance of starting. Given that Zimmerman played in December and has been strong with the national team and Richards is in midseason, that seems like a good possibility.

One position that is tough to predict is right wing. Assuming Pulisic starts on the left, will it be Brenden Aaronson (who plays on either side) on the left or Tim Weah? With Aaronson not having played in over a month (not including friendlies), Tim Weah could get the nod.

One important consideration is that Berhalter said he thought there could be significant turnover in the wing positions.

Up top, Ricardo Pepi is in season and should get the nod although given a tough start at Augsburg, Berhalter might turn to Gyasi Zardes in his home stadium. 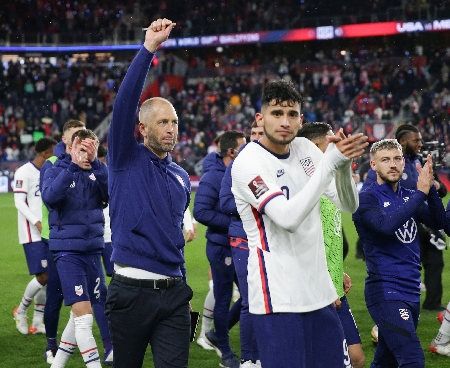