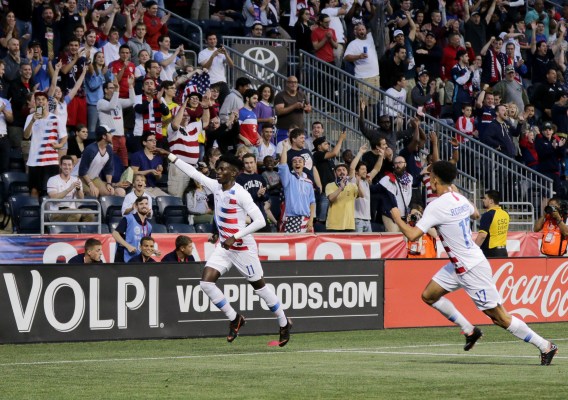 The United States national team still does not have a permanent head coach but it has set out an abitious set of friendlies this fall. Here are the dates from the formal announcement.
BY Brian Sciaretta Posted
June 25, 2018
12:00 PM
U.S. SOCCER TODAY formally announced four or the six friendlies for the U.S. men’s national team which will close out 2018 and kickoff the new cycle with a goal of participating in the 2022 World Cup in Qatar.

The U.S. team will host Brazil on September 7 at Met Life Stadium in New Jersey before traveling to Nashville for a matchup against Mexico.

In November the team will return to Europe where it will face England on November 15 at Wembley Stadium and then head to Italy for a friendly at a venue still to be determined on November 20.

The team is expected to soon announce friendlies for the October international dates although one is reportedly against Argentina in Chicago.

At this time, U.S. Soccer has not put a timetable on its head coaching search and new General Manager Earnie Stewart does not formally begin his job until August 1.

“We are at the beginning phase of building our identity,” Stewart said. “These games are obviously huge challenges, and for young players it’s an opportunity to see the benchmark of some of the top teams in the world. We can use these experiences to learn about ourselves and take the next steps towards developing into the team we want to become.”

Earlier this month, the U.S. team hosted Bolivia in a 3-0 win and then traveled to Europe where it lost to Ireland in Dublin and then drew France in Lyon. Before that, it defeated Paraguay 1-0 in March and drew Portugal last November. Those games under interim head coach Dave Sarachan helped pave the way for a new group of young players to gain a foothold into the team.

After missing the 2018 World Cup, U.S. Soccer has made plans for an ambitious slate of friendlies for the remainder of the year. These friendlies fit that mold which should prepare the team for the 2019 Gold Cup next summer.