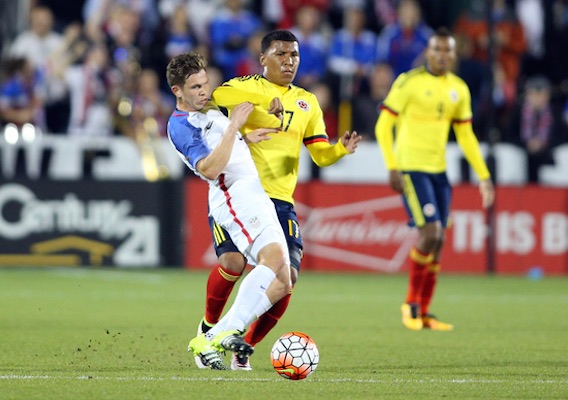 U.S. U-23 Failure a Huge Setback for Program

For the second consecutive time, the United States Under-23 program won't be playing in the Summer Olympics. Brian Sciaretta tracks the fallout and it's not good news. Que é um desastre!
BY Brian Sciaretta Posted
March 31, 2016
10:30 AM

IN A RESULT that was hardly shocking but nonetheless disappointing, the United States U-23 team failed to qualify for the Olympics after a 3-2 aggregate loss on Tuesday to a thoroughly dominant Colombia.

So the United States will not take part in Olympic soccer for the second straight cycle—the first time it has lost out on consecutive Games since the 1960s. The tournament was a major stated priority for the federation, and it came up short both in losing to Honduras last fall in CONCACAF and then in losing to Colombia in the playoffs.

Here are my thoughts on the setback, looking back not just on the loss to Colombia but on the entire cycle for this team.

With CONCACAF being such a weak region, the priority for its regional powers, the United States and Mexico, is to maximize the amount of serious competition it gets against outside teams. And while Olympic men’s soccer is technically a youth event, players at the U-23 level are usually full-time professionals whose fitness for the full team is far clearer than at the U-20 or U-17 levels.

The 2000 Olympic team was pivotal for John O’Brien and Landon Donovan, who were then key parts of the 2002 World Cup team. The last Olympic team, in 2008, produced Stuart Holden, Michael Bradley, Benny Feilhaber, Jozy Altidore, Charlie Davies, Sacha Kljestan, Maurice Edu, and Brad Guzan. All became big parts of the senior team soon after; several became a part of Bob Bradley’s core for the 2009 Confederations Cup and 2010 World Cup.

That importance is not lost on Klinsmann, who told ESPN last fall: "If we don't qualify for the Olympics, we lose another generation of young players.”

Well, if Klinsmann proves prescient, another generation of young players is now lost.

It doesn’t help that the full national team is aging: While the win over Guatemala on Tuesday night was much needed, it was hard not to notice that the Americans’ best performers were all either in their late 20s or in their 30s. By the time 2020 finally rolls around, the players in the United States’ most recent group of Olympians will all likely have retired from international play—if not from the sport altogether.

Ideally, a decent Olympic showing would have given the players the high-pressure international experience needed to facilitate a transition into the full team. Now, that integration becomes far trickier.

This is a major failure

"Well, the main task for 2015 definitely is the Olympic team, the under-23 team," Klinsmann said then. "We want to make sure that what happened with London 2012 is not happening again anymore, so we kind of put this on a higher priority level, and I think that’s exciting."

Klinsmann and youth technical director Tab Ramos believed one of the mistakes in 2012 was that the team began preparing too late in the cycle. In April 2014, to rectify that error, U.S. Soccer created a U-21 national team that would, by 2016, morph into the U-23 side.

“The fact is, we knew that we made some mistakes going into the last Olympics because we didn’t get the group together earlier, so we wanted to make sure that this time we started to gather the team,” Ramos said.

All told, then, from April 2014 through Tuesday night, U.S. Soccer had been focusing on this age group, an expensive prospect, for 23 months. The result was a team that lost to Honduras and was run off the field by Colombia.

For a federation with aspirations of competing one day among the world’s best, it is failing regularly at what it used to be able to consistently achieve. U.S. Soccer has every right to be concerned, and fans have every right to question the organization’s leadership.

The idea of a lengthy preparation for the U-23 team was a solid idea, but examining the roster for the first camp, it’s clear there was not a good initial grasp as to who the top players in this cycle were. Only three players (Jordan Morris, Shane O’Neill, and Dillon Serna) from that roster made the team that took on Colombia this past week, and of those three, only Morris played.

Many others who were projected to be central pieces just did not pan out. Will Packwood is without a club. Daniel Cuevas, Juan Oceguedo, Benji Joya, and Alonso Hernandez are not progressing in Mexico. Marc Pelosi never really recovered from his broken leg. The list goes on.

A number of the more hopeful players, in the end, only emerged late in the cycle, making them really no better off than the late-preparing 2012 team was. Matt Polster, Tim Parker, Brandon Vincent all started late. Besides Morris, only Luis Gil and eventual captain Wil Trapp—each of whom missed that first camp with minor injuries—played main roles from beginning to end.

The problem comes down to talent identification. It is understandable for a U-17 coach to have difficulty predicting who at that young age will turn into the best professional players. But at the U-21 and U-23 age group it suggests a problem.

Yes, the 2013 U-20 team may have been just a bad class, but when that first U-21 roster was unveiled in 2014, Ramos nonetheless had this to say about the players being brought in—many of whom are now struggling professionally:

“I think one of the biggest strengths that this group has is the fact that when they come together they are a group that is able to possess the ball really well. They’re not afraid to have the ball against any opponent, and when you take that fear away—the fear of playing against some of the biggest teams in the world—I think that American players tend to come through in that environment. I think with that [2013 U-20 World Cup] team, if we had to do it all over again, we would probably do a lot of things the same. I do believe that, had we gotten a couple breaks in the World Cup, this team would have gone really far.”

Could Ramos have been saying this out of encouragement or politeness? Because, in hindsight, it’s an increasingly difficult claim to defend.

The 2020 Olympic team has interesting prospects, even if getting them all released for important games will present a steep challenge.

Still, it reflects well on the age group. Christian Pulisic, Cameron Carter-Vickers, Erik Palmer-Brown, and many others are (at least at this early stage) rated highly by their clubs. Expect more to join them: In three years, MLS will be more advanced in its youth development than it is now.

For now, though, it’s small consolation. The bottom line is that this team came up way short.