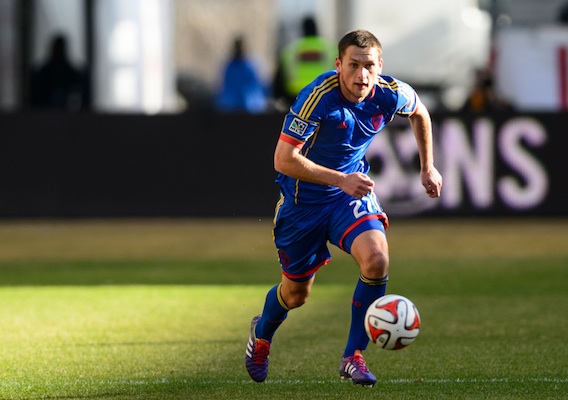 U.S. Soccer's New U-21 Team Has Olympics in Mind

Still stinging from its failure to qualify for the 2012 Olympics, the U.S. Soccer Federation has created an under-21 men's team designed to build chemistry and develop talent for the 2016 games.
BY Brian Sciaretta Posted
April 21, 2014
5:41 PM
THE FIRST-EVER United States U-21 team camp is now in session at U.S. Soccer's National Training Center in Carson, Calif., with the primary purpose of developing a squad that will qualify for, and perform well in, the 2016 Olympics in Rio de Janeiro. "In terms of our programming and in terms of where we’re going from here, we’re very excited to bring some of our best young players together for this initial U-21 camp," said U.S. U-20 coach Tab Ramos, who is running the camp. "We’re hoping that we can have another two or three camps between now and the end of the year. This camp is purely to have the team together so that we begin moving in the right direction. When the time is right, we can put a group that has kept playing together and is familiar with each other in front of a permanent coach.” If you're thinking that the the federation's failed attempt to qualify for the 2012 London games is a contributing factor in this, well, you're right. "The fact is, we knew that we made some mistakes going into the last Olympics because we didn’t get the group together earlier," said Tab Ramos, "so we wanted to make sure that this time we started to gather the team." Here's the initial roster: GOALKEEPERS
Jonathan Kempin (Oklahoma City Energy; Leawood, Kan.), Kendall McIntosh (Santa Clara; Santa Rosa, Calif.)
DEFENDERS
Christian Dean (Vancouver Whitecaps FC; East Palo Alto, Calif.), Juan Pablo Ocegueda (Tigres UANL; Riverside, Calif.), Shane O’Neill (Colorado Rapids; Boulder, Colo.), Dillon Serna (Colorado Rapids; Brighton, Colo.), Oscar Sorto (LA Galaxy; Los Angeles, Calif.)
MIDFIELDERS
Alejandro Guido (Club Tijuana; Chula Vista, Calif.), Marlon Hairston (Colorado Rapids; Jackson, Miss.), Benji Joya (Chicago Fire; San Jose, Calif.), Collin Martin (D.C. United; Chevy Chase, Md.), Esteban Rodriguez (Club Tijuana; Bell Gardens, Calif.)
FORWARDS
Daniel Cuevas (CF Lobos BUAP; Sacramento, Calif.), Danny Garcia (FC Dallas; Dallas, Texas), Jack McBean (LA Galaxy; Newport Beach, Calif.), Jordan Morris (Stanford; Mercer Island, Wash.), Sean Okoli (Seattle Sounders FC; Federal Way, Wash.), Victor Pineda (Chicago Fire; Bolingbrook, Ill.), Jose Villarreal (Cruz Azul; Inglewood, Calif.) Essentially the U-21 team will morph into the U-23 team in two years. This first camp consists entirely of MLS players and for the most part, the best players were included. Yes, some of the best current U-20 teammates will join the ranks following next year’s World Cup but this current roster includes the best from the previous age group as a way to keep them involved in the program. It's a squad that possesses considerable talent, according to Ramos. “I think one of the biggest strengths that this group has is the fact that when they come together they are a group that is able to possess the ball really well," he said. "They’re not afraid to have the ball against any opponent, and when you take that fear away—the fear of playing against some of the biggest teams in the world—I think that American players tend to come through in that environment." Above: The 28 youngest players in the ASN 100 In the midfield, Wil Trapp and Luis Gil are two players who are going to be key contributors if the team advances to Rio de Janeiro. Gil is one of the most professionally accomplished American players ever at his age and Wil Trapp is performing well in what could be a breakout season in Columbus. Unfortunately for both, minor injuries forced both to skip this camp. Another important player to take note of is Shane O’Neill, who could very well play an important role for the entire cycle.

Another will be to get the European-based players involved at some point because they're incredibly important to the team's long-term success. Central defenders Will Packwood and John Anthony Brooks have high-level experience and huge potential. Also, forward/winger Julian Green should also take part as the Olympics draw closer. Caleb Stanko is on the verge of signing a Bundesliga contract with SC Freiburg and he could be an important part of the team’s central defense. Huddersfield’s attacking midfielder Duane Holmes is another young player who could play a role despite the fact he has never represented the United States. Creating a U-21 is a smart idea because it keeps players in the U.S. system engaged and challenged during the long stretch separating the U-20 level and the full national team. By introducing this pre-Olympic team, the gap is closed and the team has a better chance to succeed. One of the biggest remaining questions for this U-21 team? Who will it play? Getting together two or three times this year is great, but finding some competitive matches where the players are forced to respond to pressure and expectations will take this to another level. If this team can find quality games at key intervals throughout the cycle, it could pay huge dividends. What are your thoughts on the new U-21 squad? Who would you like to see called into future camps? Share your thoughts below. Brian Sciaretta is an American Soccer Now columnist and an ASN 100 panelist. Follow him on Twitter.