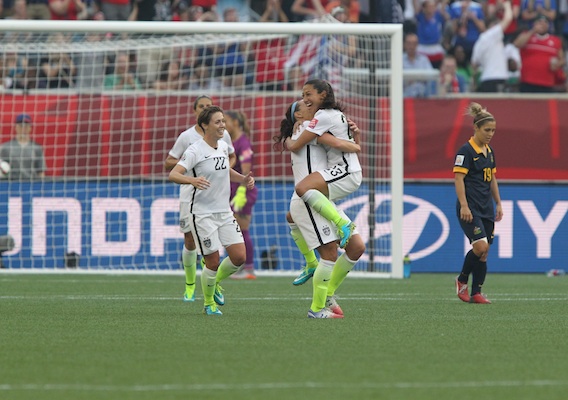 After a dicey start with plenty of back-and-forth action in the opening 30minutes of play, the U.S. went into the locker room at halftime tied 1-1. In the second half, the Americans finally established their dominance, pulling away and locking up all three points.

Megan Rapinoe finished with a brace for the U.S. and was joined by Christen Press on the scoresheet. The Australians lone tally came courtesy of Lisa De Vanna. Here are four thoughts from the action.

After a Sunday report by ESPN’s Outside the Lines released new information on Hope Solo’s domestic violence arrest from last summer, many speculated that the news would be a distraction to Solo and the U.S. squad.

But Solo proved to the Matildas, and the rest of the planet, that she is ready to play. The Richland, Washington, native made multiple saves, especially early on, to keep the U.S. in the match. Five minutes in Solo was called upon to save an effort from Emily Van Egmond: The shot came through Lauren Holiday’s legs from close in, but Solo tracked the shot and pushed it into the crossbar and away from danger.

Hope Solo keeping the #USA alive with big saves, like these 2 from the 1st half http://t.co/GtXHrt8ZwE http://t.co/syLh9bj6Eq

Eight minutes later Solo was called upon again after the U.S. lucked into an early goal and was protecting a 1-0 lead. On the play, Aussie forward Sam Kerr snuck in behind U.S. right back Ali Krieger for an open volley. Solo was again up to the task, getting her left hand down to push away the shot.

Many fans have been critical about the the U.S. women's national team's continued reliance on Abby Wambach. While Wambach is the world’s all-time leading scorer in international play, her abilities have faded in recent years.

Still, head coach Jill Ellis has continued to use Wambach, often as a starter, much to the chagrin of a large contingent of American supporters. On Monday against Australia, Wambach was again in the starting XI, and again, put on a subpar display.

One problem caused by Wambach’s inclusion in the lineup is the troubling tendency of the American squad to play wastefully direct. The other problem, obvious on Monday, is that when the ball did find Wambach in the air (both on set pieces), she headed both chances well wide of the net.

While Alex Morgan is still not fully recovered from a knee injury suffered back in April, and Amy Rodriguez has never fully grabbed the bull by the horns in her limited starts, Wambach has not been convincing in recent months. Perhaps it’s rust from sitting out the beginning of the NWSL season, perhaps it’s simply down to her increasing age, or perhaps she just had a bad game. But whatever the cause, it doesn’t seem like her continued starts are merited at this point.

Ellis really should find a way to put Press in front of goal, even if it means benching Wambach. Much more dynamic. | USA 2-1 AUS | 65'

With all due respect to Solo’s excellent effort in goal on Monday, Rapinoe was the U.S.’s woman of the match, contributing to all three American goals. Although her opening tally in the 12th minute did come off a wicked deflection, she used a terrific bit of skill to spin out of traffic after winning the initial ball on the play.

Rapinoe also proved instrumental in setting up the team’s second goal when she put Sydney Leroux in down the sideline in the 61st minute. Leroux then made a powerful endline run before centering to Press for the finish.

And finally, Rapinoe scored the game-sealing goal in the 78th minute for the U.S. Picking up a loose ball just inside her own half, she drove the length of the field before beating her mark just inside the box and slotting home to the far post.

Rapinoe with her second goal of the match. 3-1 #USA #USWNT https://t.co/OOlBhY5dJk

Press, starting her first World Cup match, seemed a bit overwhelmed by the moment. Early on she gave away possession too easily and struggled to make her mark on the match. However, she did eventually settle in and did well when it mattered in the 61st minute. Running into the box, Press got on the end of Leroux’s pass and tucked her shot neatly into the side netting of the far post for the go-ahead goal.

Once ahead again, the Americans never looked back.

Becky Sauerbrunn was the best player on the back line for the Americans on Monday. She did well to kill off repeated Matilda attacks with well-timed tackles and superb positioning. Her best moment came in the 50th minute. Sauerbrunn’s center back partner, Julie Johnston, stepped into the midfield to make a play, but missed the ball. With Australian speedster Sam Kerr now barreling down on Solo and the U.S. goal, Sauerbrunn made a 40-yard recovery run to smother the play.

Carli Lloyd, for her part, was relatively quiet in the U.S. midfield, especially on the offensive side of things. Lloyd did, however, make a number of important challenges in the middle of the pitch and, in general, made life difficult for the Matildas.

Finally, right back Ali Krieger had a poor game. While many U.S. fans have been particularly worried about the left side of the defense, the Australians found ways to exploit Krieger on multiple occasions. She was beaten for pace, beaten by overlaps, and beaten while ball watching—all resulting in good opportunities for the U.S. opposition. Krieger is normally the U.S.’s most reliable outside back, so it is probably safe saying this game was an anomaly.

With three-points from the win, and Sweden and Nigeria drawing in the other Group D matchup, the U.S. now sits in first place in their group. Their next opponent is Sweden with the match taking place on Friday.

Encouraged by the result? Worried about some of the ongoing issues? Share your take below.