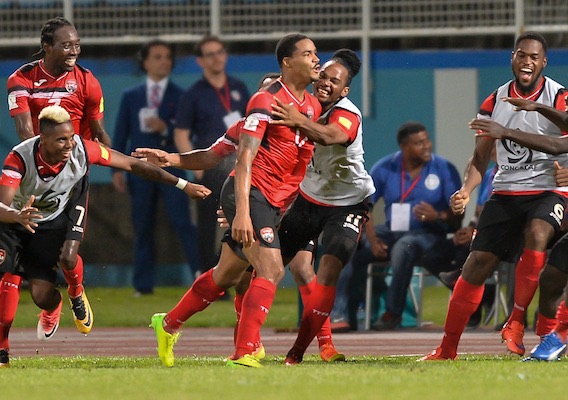 The Americans put in a listless first half and fell behind Trinidad & Tobago 2-0. Christian Pulisic pulled one goal back after the break but the U.S. couldn't equalize and will miss the 2018 World Cup in Russia.
BY Noah Davis Posted
October 10, 2017
2:00 PM
COUVA, Trinidad and Tobago—The United States men's national team will not be going to the World Cup. A 2-1 loss to Trinidad and Tobago, combined with wins by Honduras and Panama, mean the Americans will miss the tournament for the first time since 1986.

It was, all things considered, an awful night for the red, white, and blue.

The first good chance of the match came in the seventh minute. Yedlin nutmegged a T&T defender before squaring a ball to Altidore in the box. The Toronto FC forward had time to take a touch and settle but blasted his shot over the net.

The Soca Warriors, perhaps emboldened and relieved by the American let-off, enjoyed a strong spell of possession that resulted in a corner kick. The set piece, however, came to nothing.

In the 17th minute, disaster struck as the home side scored. A cross came in from the right, which Gonzalez and Shahdon Winchester attacked. The ball popped up off the defender's missed clearance and drifted over Howard in net.

The goal did not wake up the visitors. Gonzalez nearly conceded a penalty moments later but Salvadorian referee Marlon Mejia Carrillos kept his whistle in his pocket. The only good news was that Mexico scored against Honduras, a helpful result if the Americans hoped to get through with a loss.

The deficit doubled in the 37th. Alvin Jones blasted a shot from 35 yards that easily beat Howard to his right. It was not the start the U.S. wanted, but it was the one they deserved. Again, the only positive you could draw was that both Honduras and Panama were now losing.

Joevin Jones nearly made it three late in the first half. His free kick from distance bounced in front of Howard and almost skipped by the American goalkeeper, who did enough to deflect it before ushering the ball out of bounds.

Moments later, the opening stanza mercifully ended. The smattering of home fans gave their team an enthusiastic ovation. The Americans walked off, shoulders slumped after one of the worst 45 minutes they'd played in years.

In an effort to inject life into his listless squad, Arena brought Clint Dempsey on for Arriola to start the second half.

It took Pulisic 82 seconds to turn the game on its head. After a nice spell of possession, the teenager got the ball just outside of the 18-yard box, took a touch, and took a shot. It went in, the 12th of 17 goals he's been a part of during the Hexagonal. There were signs of life...

...which were almost extinguished soon after when Levi Garcia found himself with an open net, only to be stymied by Yedlin's last-ditch effort.

In the 59th, Nathan Lewis broke in alone but Yedlin chased him down and made another sliding stop. Elsewhere, Honduras scored to draw level with Mexico and Panama evened the score with Costa Rica. And then the Ticos scored again, a string of results that would put the Americans in the playoff.

Dempsey nearly leveled the game in the 69th minute. Bradley rolled a set piece across the 18-yard box and the Seattle Sounders forward forced an excellent parry from Adrian Foncette.

In the 72nd minute, Kellyn Acosta replaced Villafana. The U.S. had a little over a quarter of an hour to avoid a massive disappointment.

Again, Dempsey was almost the hero. His left-footed shot in the 77th minute beat Foncette but rung off the post.

Nagbe, who looked exhausted most of the match and needed longer spikes, came off in the 84th. Benny Feilhaber took his spot, the Americans in desperate need of his creativity.

A "U-S-A" chant from visiting supporters broke out as Bradley stood over a free kick in the 87th. After a flick on in the box and a cross back in by Pulisic, Wood had a header in the box. Foncette dove to his left, palming the ball just over the touch line.

There were five minutes of stoppage time for the Americans to rescue their World Cup dreams.

Like so many times during the cycle, they failed.