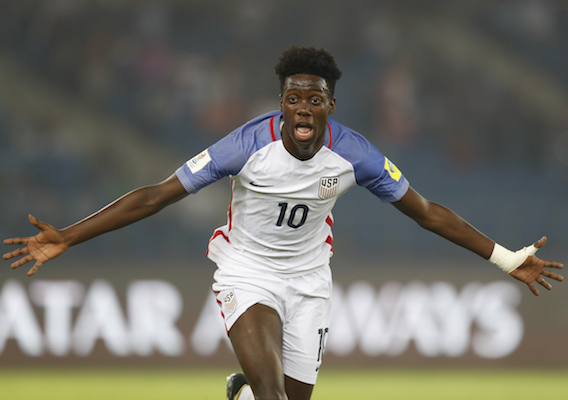 THE UNITED STATES UNDER-17 TEAM is through to the quarterfinals of the World Cup after putting on a brilliant performance in a 5-0 win over Paraguay in New Delhi. Tim Weah scored a hat trick and Andrew Carleton produced a goal and two assists in the rout.

The Americans showed an impressive ability to rebound after a poor performance against Colombia in the Group A finale. In that game, the U.S. was even at halftime but conceded twice to lose 3-1. Despite having six points with wins over Ghana and India, the Yanks fell to third place and had to face a Paraguay team that won Group B with a perfect nine points following wins over Mali, New Zealand, and Turkey. In those three games, Paraguay scored 10 goals.

Paraguay was expected to be a tough challenge for the United States but John Hackworth’s team was on a completely higher level tonight.

“I alluded to the fact yesterday that I thought my team had played five really good halves,” Hackworth said. “I've always thought they've had an excellent responses whenever they have a performance that isn't up to our standards.”

In the 19th minute the Yanks finally moved ahead when Carleton sent Ayo Akinola down the right side and the Toronto FC winger sent a perfect low cross into Weah who easily beat Diego Huesca for a 1-0 lead.

There was absolutely no let up in the second half. In the 53rd minute the United States doubled its lead with one of the best goals at the U-17 World Cup so far. On the play, Weah received the ball out wide and cut into the middle of the field. With defenders closing in, the Paris St. Germain forward cut back and unleashed a beautiful but unstoppable curving shot into the top of the goal for a 2-0 lead.

From there, the U.S. pressed on. Akinola and Akil Watts combined on the wing to send in a cross for Josh Sargent. The new Werder Bremen product set up Carleton for a beautiful point-blank shot to give the U.S. a three-goal lead.

In the 74th minute, Sargent would turn the game into a rout after Carleton played him a perfect ball into the box and the St. Louis product easily scored with his second touch for a 4-0 lead.

Three minutes later Weah completed his hat trick when Akinola played Carleton into a dangerous position. Carleton, who was involved in just about every dangerous chance on the day for the U.S., crossed and found Weah who scored with his first touch to complete the scoring.

"I didn't really change anything," Weah said regarding his approach to the game. "I just listened to what the coach had to tell us. He gave me specific instructions and I took that into mind. Sometimes if I don't start, I come off the bench and do my job. Whenever I am starting, I come out and give it my all. I praise God today and I think Coach Hackworth for starting me because all of that I wouldn't have gotten my hat trick today.

"I thank Andrew Carleton and the whole team for working with me and getting the win.”

The young Yanks will now return to the southwest coastal town of Margao where it will face the winner of Tuesday’s round of 16 game between Japan and heavily favored England on Saturday. England has been perfect so far in the tournament with wins over Iraq, Chile, and Mexico and are considered contender to win the tournament.

That said, after a 5-0 win over Paraguay, the U.S. will not take anyone by surprise the rest of the way. Here are four thoughts on the match.

Weah’s second goal was one for the ages and the young attacker was the talk of the postgame press conference.

“This young man did it all and the goal, by the way, wasn't brilliant, it was world-class,” a beaming Hackworth said. “I'm sure a lot of people are taking notice.”

Even Weah himself was at a loss for words and admitted such quality goals are rare, even for him. He also added that he has yet to talk to his mom or his famous father, George Weah, but he is looking forward to them seeing it.

“I don't know what to say,” Weah said. “My striker instinct just told me to cut back and hit it. I hit it and it ended up being a beautiful strike. Without the pass coming from Gloster or without him making the run behind me, I wouldn't have created the space to score the goal. So I really thank him. I don't score a lot of beautiful goals. Most of my goals are tap-ins but today I am just so excited to have scored a beautiful goal.”

Carleton had best game of his career

Andrew Carleton has had some nice moments so far this tournament, but the Paraguay game really showed his potential. It wasn’t just about individual moments—Carleton completely took over this game and dominated. He was springing dangerous pass after dangerous pass while showing a nice vision for the field. This was his game.

Assuming the United States has to face England, Hackworth will need all of his players to step up. If Carleton can play like this, the U.S. will have a real shot

This was also the best game of the tournament for top forward Josh Sargent who could be one of the tournament’s best goal scorers. So far at the World Cup, getting consistent service has been a little difficult but today he was very good with one goal and one assist. Even when others are scoring more than he is, Sargent draws a lot of attention from defenders and that opens the door for players like Weah and Carleton.

No matter how well the U.S. U-17 team does in India, American fans are still in a funk after the shocking elimination of the national team from the World Cup.

But this U-17 team wants to be part of the change and that is a very mature way of looking at a bleak situation. Hackworth is also right that while there is a current sentiment among fans to “blow up everything” regarding U.S. Soccer, the youth national teams have been on the right track for the past five years.

The U-20 team has made nice runs at the past two World Cups and now the U-17s are following suit. The previous U-17 team, coached by Richie Williams, did not make a decent run but still had players like Christian Pulisic, Tyler Adams, Haji Wright, and Brandon Vazquez.

But Hackworth’s words on the U-17s are refreshing and appropriate.

“I don't think anything is going to take away that,” Hackworth said of his team helping to ease the pain of the senior team’s disappointment. “I would say that we talked about that internally when that happened as a team and I told these guys that the responsibility was falling on them now to give hope to our country and to all the good work I think we're doing with the national team programs. It's easy when you have a bad result for everyone to think so negative, and no more so than when you miss a World Cup. But hopefully with this performance tonight we've shown our country and the world that we're a footballing nation and we have some potentially world-class players like the gentleman sitting next to me [Tim Weah].”