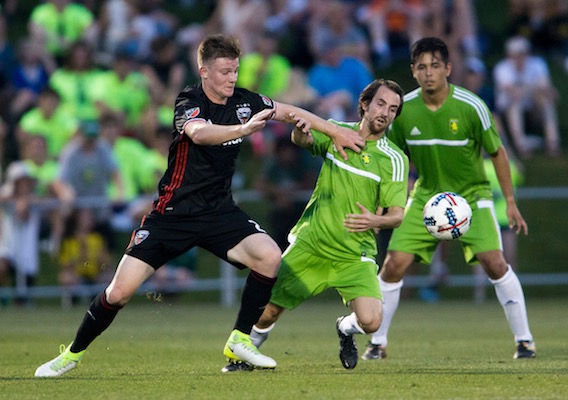 The teenager from Virginia has made a big impression through three games at the U-17 World Cup in India—and given the senior team's sorry showing, he recognizes that America is watching.
BY Brian Sciaretta Posted
October 13, 2017
6:00 AM

ON TUESDAY NIGHT many American soccer fans watched the U.S. men's national team suffer a shocking elimination from World Cup qualifying. This staggering news reverberated throughout the football world—all the way to to India, where another team was representing the Red, White, and Blue.

As Bruce Arena's men dropped the ball the United States U-17 national team was asleep in Navi Mumbai ahead of Thursday’s group stage game against Colombia in the U-17 World Cup.

This U-17 team is led by several top teenage American prospects. Many know Josh Sargent, a redhead from Missouri who signed a deal with Werder Bremen after emerging as a star with the U-20 national team. Some are familiar with Atlanta United’s Andrew Carleton. But also key to John Hackworth's team is D.C United’s Chris Durkin, a Richmond, Va., native who has been one of the best midfielders in the tournament through the first three games.

U.S. Soccer tightly monitors the sleep of its youth players at the World Cup so the team was unable to watch the senior team’s game. But Durkin, 17, said that Hackworth stopped he and Sargent on Wednesday morning.

“We have to turn our phones in at night to get the proper sleep,” Durkin told American Soccer Now from Navi Mumbai. “Josh and I were going to breakfast together and Hack pulled me and Josh aside and told us we didn't make the World Cup. I was just completely caught off guard and almost in disbelief. It was just a big surprise for me personally. Then Hack brought the entire group together and kind of discussed it.

"I think the entire group was extremely shocked by the news. The disbelief hit first and then the sadness—and then reflecting on how it happened. It's definitely a bit more motivation for the team for this World Cup.”

Playing as a defensive midfielder in the No. 6 position, Durkin has been a standout for the U-17s over the first two games. In the opener against India in New Delhi, Durkin scored the team’s second goal with a blast from the top of the box after a botched clearance from a corner kick.

Then, against Ghana, a team in contention to make a run at the World Cup, Durkin helped control the midfield en route to a 1-0 win, helping the young Yanks clinching a spot in the knockout stages. On Thursday the U.S. lost to Colombia 3-1 and will face either Iran or Paraguay in the Round of 16.

Last year, at the age of 16, Durkin signed a homegrown deal with D.C. United. This year he was loaned to its USL affiliate, the Richmond Kickers, where he started regularly and performed well. While making one appearance with United in the Open Cup, Durkin was able to begin his professional career which he hopes will give him a full-time spot with D.C. United next year. As a versatile player who can float between the No. 6 position and central defense, Durkins honed his midfield skills with the Kickers this year, and that has given him an edge in India.

“I definitely feel a little more at home as a No. 6 because that is where I've been playing with Richmond all my games this season,” Durkin said. “I feel confident in that position and that the professional minutes I have gained helped me with the speed of play. Especially against Ghana. I think my speed of play on the ball has definitely improved playing professional minutes. I am feeling confident and I want to continue this form and help this team.

“The goal I had this season was to get as many minutes and good games as I could and I think Richmond provided that,” he added. “I was able to get 90 minutes just about every game and they treated me very well. I am from Richmond as well so I always had a good crowd. That was great way for me to kickoff my professional career. I felt comfortable there and I think it helped me out as well. My sights are set on D.C. and trying to break into that 18 and get some good minutes in that new stadium. It's exciting.”

Now with a chance to advance to the quarterfinal, Durkin said the team is confident despite the loss to Colombia. Most American soccer fans are still smarting from the World Cup catastrophe, but these teenagers are focused on the task at hand.

This is not the first time that the U.S. U-17 team has played in uneasy circumstances. In 1999, the full national team was trying to rebuild after the disastrous last-place performance at the World Cup the previous year. That U-17 team helped lay the framework for change at the 1999 U-17 World Cup with a semifinal run consisting of some of the program’s best-ever players like Landon Donovan, DaMarcus Beasley, Oguchi Onyewu, Bobby Convey, and Kyle Beckerman.

This was not lost on Durkin after he learned the news of the senior team. As his team aims to make a deep run in the knockout stage, he believes the U-17 effort now has more meaning.

“There is definitely a bit more responsibility put on the U-17s, currently, because the spotlight has been put on us a little bit more,” Durkin said. “Maybe a new era might be coming in. I am not sure, personally, but I definitely think the responsibility is put on us more now.”