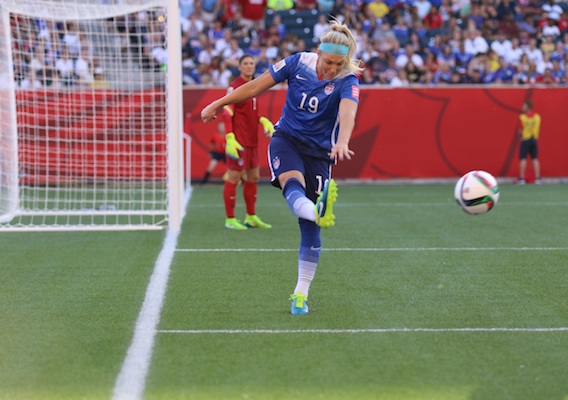 Both teams played well, but in a game that desperately needed a goal, neither Pia Sundhage's Sweden team nor Jill Ellis' American squad could break through. Here is John D. Halloran's match report.
BY John D. Halloran Posted
June 12, 2015
10:30 PM
BEHIND A GUTSY and determined defensive effort, the United States women’s national team battled Sweden to a 0-0 draw in the second game of play in Group D on Friday night in Winnipeg.

The tie puts the U.S. at the head of Group D heading into its final match against Nigeria. Here are three thoughts from the game.

THE DEFENSE WAS EXCELLENT

Despite the lack of scoring in the match, U.S. fans had to appreciate the excellent defensive effort put forth by the American backline against the Swedes. The center back tandem of Julie Johnston and Becky Sauerbrunn was fantastic all night long, breaking up a number of promising Swedish attacks and holding down the fort while the U.S. offense went looking—albeit fruitlessly—for a second-half goal.

Johnston’s best moment came in the 50th minute when she was forced to make a 90-yard recovery run to snuff out a counter attack after a U.S corner, while Sauerbrunn did nearly the exact same thing in the 63rd minute. Attempting to covering up an errant pass by left back Meghan Klingenberg, Sauerbrunn stepped into the midfield, but did not win the ball. As the Swedes bore down on the U.S. goal with Julie Johnston stuck in a 2 v. 1 situation, Sauerbrunn recovered into the play to kill off the attack.

For her part, Klingenberg made the play of the game. In the 77th minute, she held her position on the post during a Swedish corner kick and headed away a shot that was headed for into the net to preserve the 0-0 draw.

Klingenberg saves it off the crossbar for #USA https://t.co/GyfA3EJPnl

When the U.S. tied South Korea last month in its final match of the Send-Off Series, Abby Wambach was quick to try and calm the growing worries of many fans by saying after the match, “Everybody, don’t freak out. We’re going to be fine.”

However, that doesn’t appear to be the case. For months now, the U.S. offense has been sputtering along while the veterans on the team have continued to argue their, “Nothing to see here, move along” mantra. And while a game against the fifth-ranked Swedes should be a tightly contested match, these issues go far beyond one bad game.

For her first few months in charge, Ellis tinkered with a 4-3-3 formation before finally reverting to the tried and true 4-4-2. She has also eschewed the use of a traditional holding midfielder, instead shoe-horning arguably the best playmaker in the world, Lauren Holiday, into the role. Carli Lloyd, who has always been key to the U.S.’s offensive production, has also struggled to find her best form in Ellis’ system, failing to score in nine consecutive matches dating back to the March Algarve Cup.

On Friday night, the U.S. did get a few bright moments down the flank from Megan Rapinoe, but the other American attackers (including Sydney Leroux, Christen Press, and Morgan Brian, as well as Abby Wambach, Amy Rodriguez, and Alex Morgan off the bench) failed to produce much of note over 90 minutes. For that cmuch talent to be that ineffective, there must be deeper issues.

A few times during Ellis’ use of the 4-3-3, she stumbled onto the correct combination, but failed to realize it. The U.S. found an offensive flow in the few games in which it used Lauren Holiday, Carli Lloyd, and Morgan Brian in the middle together—rather than the multiple times it tried to force Wambach or Rapinoe into the attacking midfield role. In those few games—with Holiday, Lloyd and Brian running the midfield—the U.S. attack lit up as the addition of Brian allowed Lloyd to get forward and spark the American attack.

It may seem counterintuitive, especially considering the depth and breadth of the U.S. striker pool, but a move to a 4-2-3-1 with Brian, Holiday, and Lloyd patrolling the middle may be what the U.S. needs to get out of its current offensive funk. After all, what is the point of starting two strikers if you’re not even generating chances on goal?

WHO IS THE RIGHT MID?

Many speculated before Friday’s match that Ellis might move Press up top for Wambach at the start—and that’s exactly what happened. However, most thought that Ellis would then bring on Tobin Heath to play right midfield—that didn’t happen.

Instead, Ellis started Brian out of position on the flank and she didn't have make much impact on the match. Then, as the U.S. struggled to find a goal, Ellis move Press out to the wing when Amy Rodriguez entered. Later, Press was withdrawn for Wambach and Leroux was moved to the wing, before Morgan was subbed in for Leroux and Rodriguez was moved to the flank.

Confused? So, it seems, were the U.S. players.

One frustration of U.S. fans since Ellis took charge is her tendency to place players out of their natural positions. And while some of that is necessary—to an extent—with a team full of so much talent, it is also clearly causing problems in the wide areas of the field as Ellis continues the revolving door of forwards and center midfielders out of the U.S.’s right flank.

Despite the common wisdom that Press is best as a No. 9, most of her best games with the U.S. have actually come with her deployed wide. Press scored against Australia from the midfield position and her golazo against France in March was also when she was playing in the midfield.

It might not be the ideal circumstance, but if Ellis is hell bent on not giving Tobin Heath a larger role to play, Press is the U.S.’s best option out wide.

Editor's Note: The sequence below exemplified the competitiveness, and the scorelessness, of the evening. (Photos by Jeremy Olson for American Soccer Now.)