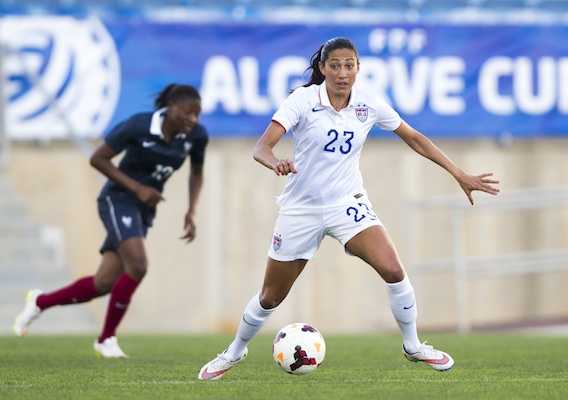 Despite an inconsistent run of form, the United States women's national team defeated France 2-0 on Wednesday to claim the 2015 Algarve Cup. John D. Halloran breaks down the action here.
BY John D. Halloran Posted
March 11, 2015
7:48 PM
FOR A TEAM WIDELY considered to be a favorite to win the 2015 World Cup this summer, things couldn’t have been much worse for the United States women’s national team heading into Wednesday’s Algarve Cup final against France. Yes, the team was set to play in the tournament final, but in recent months had also been playing a sloppy, uninspired brand of soccer that led to losses to Brazil and France and ties against China and Iceland. But on Wednesday night in Portugal, head coach Jill Ellis and U.S. fans were able to let out a collective sigh of relief, as the Americans beat France 2-0 to capture a record 10th Algarve Cup championship. The win came on the back of first-half goals from Julie Johnston and Christen Press. Here are five thoughts on the match.

With Christie Rampone and Whitney Engen out injured, fourth-choice center back Julie Johnston started three of the U.S.’s four matches in Portugal. Johnston played well throughout the competition, but she saved her best for last. In the final, Johnston opened the scoring for the U.S., heading in a Lauren Holiday free kick to give the Americans a dream start in the seventh minute of play. In addition to the goal, though less obvious, was Johnston’s solid defensive effort all game long. Throughout the match, Johnston was strong in the air, kept the game in front of her, and made a number of strong tackles. Most impressive, however, was her work cleaning up messes. On two separate occasions in the first half Johnston’s awareness saved the U.S. when she knocked away second chances—one off a poor clearance from Meghan Klingenberg; the other a rebound given up by Hope Solo. The only problem now is a selection headache for Ellis, as the calls for Johnston to become a regular starter in the U.S. back line have already begun.

How do you keep Julie Johnston out of the US lineup once the World Cup starts?

Although Abby Wambach did make an appearance on Wednesday, it did not come until the 85th minute of play and by that time the result was in the bag. Instead of Wambach, Ellis started Amy Rodriguez up top alongside Alex Morgan. Rodriguez didn’t exactly make a case for continued starts, but she did work hard, showed for the ball well, and demonstrated what the U.S. has been missing when Wambach starts. While Wambach’s historic specialty has been her physical presence up top, her lack of mobility has become patently obvious in recent months, as well as her declining ability in the air. With other options available as targets on set pieces and the need for a more active presence up top, it is obvious the U.S. no longer needs Wambach in the Starting XI. While it was surprising to see how few minutes Leroux received in this tournament, it is clear that the U.S. is at its best with someone other than Wambach to partner Morgan at the forward position.

There are a number of reasons that U.S. fans, while excited, need to keep this victory in perspective. First, no winner of the Algarve Cup has ever gone on to win the World Cup in the same year.

Second, the U.S. had a major advantage heading into this game. Because of the tournament’s absurd format—which requires each team to play four games in eight days—and because the U.S. was placed in the weakest of all groups, the U.S. was far fresher in this game than France. In group play, France had to go through World Cup champions Japan, Denmark—which beat the U.S. 5-3 in this tournament last year—and Portugal. The U.S., by comparison, played Norway, Switzerland, and Iceland in group play. France was also on the wrong side of the injury bug, missing several key players, especially on the defensive side of the ball.

When the U.S. played France last month in Lorient, the French used a series of wide midfield attacks to beat the U.S. 2-0. On Wednesday, the U.S. was able to thwart those attacks—for the most part—by using a wider midfield of its own. In February, the U.S. switched away from the 4-3-3 it had been using and began to implement a 4-2-2-2 “empty-bucket” formation. This often led to “wide” midfielders Carli Lloyd and Christen Press playing very narrow underneath the forwards, which led to both of the U.S.’s outside backs being isolated. In the Algarve Cup final, Press and Lloyd still found opportunities to tuck into the middle of the field, but spent most of the match in wider positions. This made it easier to support the fullbacks and gave the French less room to operate near the touchlines.

#USWNT midfield, overall, much wider today. Made a difference. pic.twitter.com/R7pvuiua4p

Another bright spot for the U.S. against France was the overall play of Hope Solo. Coming back from a 30-day suspension to start all four games in this tournament, Solo had a few shaky moments during group play. But in the final, she was outstanding. In particular, Solo had a fantastic punch in traffic on a dangerous free kick in the 35th minute to preserve the U.S.’s one-goal lead at the time. Then, in the 81st minute, with the U.S. up 2-0, Solo came up huge by saving a penalty. For Ellis, who restored Solo to the starting lineup even after two strong performances from backup Ashlyn Harris in February, the performance had to be reassuring. Finally, one has to admire the sheer quality of Christen Press’ goal that put the U.S. up 2-0 just before the half. On the play, Press stepped into the middle of the field to intercept a French pass, then dribbled four separate French defenders before cooling slotting home. It was, in a word, a golazo.

As the U.S. heads into its final three months of preparation for this summer’s World Cup, there are still a number of issues to sort out. Perhaps it was due to fatigue, but Carli Lloyd, Morgan, and Holiday did not fare well against France. Lloyd, who almost single-handedly led the U.S. to victory against Norway, repeatedly lost the ball due to misplaced passes, dribbling in traffic, or bad touches. She also skied a terrific chance in the 66th minute. Morgan, who saw her first extended action in this tournament after long stretches on the sidelines with two severe ankle injuries, is still looking to reclaim her form. Against France she struggled to work her way into the match, gave away possession repeatedly, and missed the chances she did have. By the second half, her frustration was clearly visible in both her play and body language. Holiday also struggled against France. She uncharacteristically gave away possession on a number of occasions and was beat on the dribble repeatedly. Like Lloyd, Holiday has routinely been played out of position by Ellis, but that doesn’t seem likely to change anytime soon. To Holiday’s credit, her poor play on Wednesday appeared to be mostly the result of playing four games in eight days. The U.S. is next in action April 4 against New Zealand.