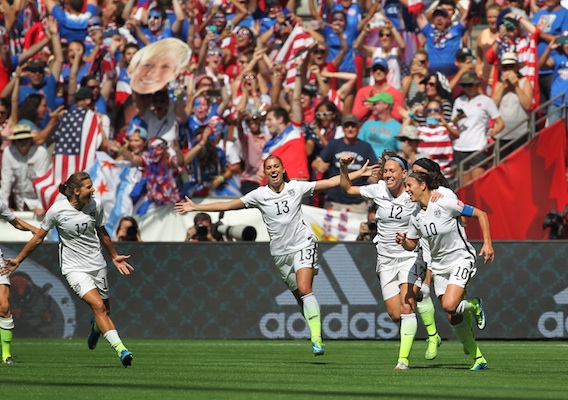 U.S. captain Carli Lloyd scored two goals in the first five minutes of the match and another from the midfield stripe to lead the United States to the 2015 Women's World Cup title.
BY John D. Halloran Posted
July 05, 2015
9:00 PM

Getting off to a quick start on the back of a Carli Lloyd hat trick within the first 15 minutes—with another goal by Lauren Holiday sandwiched in between Lloyd’s tallies—the U.S. went into the locker room at halftime with a 4-1 lead.

In the second stanza, Japan managed to bring it back to 4-2, but the damage was already done. Tobin Heath then delivered the death knell in the 55th minute to bring the score to 5-2 and the U.S. cruised to victory. Here are three thoughts on the win.

Early in the 2015 World Cup, Lloyd just couldn’t get going. She contributed little to the U.S. attack and struggled in possession.

Then, in the Round of 16, Lloyd got on the scoresheet via penalty kick and the floodgates opened. She scored in the quarterfinals on a header and then picked up a goal and an assist in the semifinals against Germany before dropping her hat trick on Japan.

Against the Nadeshiko, Lloyd first tallied on a corner kick in the third minute before doubling her total in the fifth minute on another set piece and giving the U.S. an early 2-0 lead. Her midfield compatriot Holiday then cushioned the U.S.’s lead in the 14th minute with a nice volley to bring the score to 3-0.

But Lloyd, and the U.S., were still not finished with their early destruction of Japan.

In the 16th minute, Lloyd scored one of the greatest goals in the history of the women’s game—an absolute golazo. Taking the ball just inside her own half, she touched past a Japanese defender before launching an effort on goal from the half line. Japanese goalkeeper Ayumi Kaihori tried to get back and cover the shot, but the ball drifted over her head and into the net to complete Lloyd’s hat trick.

The GOAL that completed Lloyd's Hatrick was amazing. https://t.co/Ef9rB2V0n9

Lloyd has always been a big-game player, scoring the game-winning goals for the U.S. in the last two Olympic finals. And speaking to the media on Friday, Lloyd indicated she was ready to step up once again.

“This is a final. This is where you put everything on the line, there's no holding back.”

Lloyd's explosion late in the tournament was due primarily to head coach Jill Ellis’s decision to bring Morgan Brian into the starting XI and move to three players in the center of the midfield. The introduction of Brian allowed Lloyd to push higher up the field and closer to goal—where she has always been more effective.

Love seeing @CarliLloyd being challenged individually at outside mid, but center mid is where she belongs. The most complete CM in world.

It’s a wonder why it took Ellis so long to come to this conclusion—as Ellis even tinkered with playing Lloyd as a wide midfielder over the past six months—but once the coach made the switch, the U.S. attack, which had struggled in the months leading up to the tournament and in the group stage, finally opened up.

JULIE JOHNSTON HAD A SHOCKER

Leading up to the Sunday’s final, Julie Johnston had been an absolute revelation for the Americans. Partnering with Becky Sauerbrunn at center back, the two dominated, leading the U.S. to five shutouts in seven games, a 0.42 goals against average, and a streak of 540 minutes of scoreless play. She was even on the shortlist for the Golden Ball as the tournament’s most outstanding player.

In the final, however, Johnston struggled badly and was directly responsible for both Japanese goals. On the first, in the 27th minute, Johnston was attempted to remain touch-tight to Yuki Ogimi in the box, but fell down on the play. Ogimi turned and fired home to make the score 4-1.

Then, just after half, Johnston committed a foul just inside the U.S. half in the 50th minute and then, on the subsequent dead ball, managed to head the ball past Hope Solo and into the U.S. net.

Luckily for Johnston—who also narrowly missed being the goat in the semifinal match against Germany when she conceded a penalty when the match was 0-0—the U.S. offense was on track on Sunday night and scored more than enough to paper over her gaffes.

Besides Ellis’ epiphany with Lloyd, many other factors went the Americans’ way before and during the tournament. Having struggled over the winter with losses to Brazil in December and France in February, the U.S., and Ellis, looked lost.

Ellis began to turn things around in March. Injuries to Christie Rampone and Whitney Engen allowed Johnston to work her way into the lineup. And, her disastrous performance against Japan on Sunday aside, Johnston helped form the backbone of the U.S. defense in the World Cup. It was the U.S. defense, not its offense, that kept the Americans going in the early games of this tournament.

Just before the tournament, Ali Krieger and Alex Morgan both suffered injuries—Krieger’s a horrifying concussion and Morgan’s a bone bruise that wouldn’t heal—but both managed to recover in time to be key contributors. And Tobin Heath, who had only started in two of the U.S.' first 10 games in 2015, finally won back her spot and started the final five games for the U.S. in the World Cup.

Hope Solo, after a 30-day suspension issued in January, managed to stay out of the headlines and was a key player in the U.S.’ opening game win over Australia. Abby Wambach, while benched late in the tournament, picked up the game-winning goal against Nigeria in the final game of group play that helped assure the Americans the top spot in Group D.

In the months leading up to the tournament, Ellis struggled with how to use the five very talented forwards she had at her disposal. In the end, the solution was to bench four of them, including Sydney Leroux, Christen Press (who many thought would have a breakout performance), and all-time international goal-scoring leader Abby Wambach.

When Ellis took the job as U.S. manager last April, she had a clear understanding of her assignment: “I know the expectation—embrace the expectation. When you work for U.S. Soccer, it’s about winning gold medals and being on the first-place podium.”