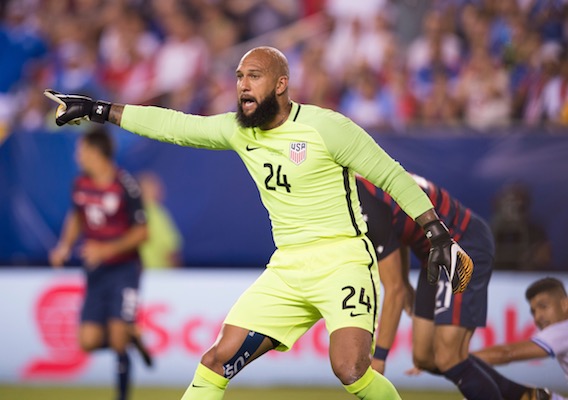 Jozy Altidore, Tim Howard, and Bruce Arena all expressed disappointment after Wednesday's 2-0 win over El Salvador. Here's what the coach and some key players had to say about the performance.
BY Franco Panizo Posted
July 20, 2017
4:00 PM

PHILADELPHIA—Sloppy, ugly, subpar. The U.S. national team knows it was not at its best on Wednesday, and that a repeat showing this weekend could spell doom to its CONCACAF Gold Cup title aspirations.

The U.S. moved through the quarterfinal round Wednesday night by posting a 2-0 win over El Salvador at Lincoln Financial Field. While the scoreline might indicate a strong performance from the Americans, their effort once again left something to be desired.

In fact, the U.S. prevailed only through a late surge in the first half. That impressive 10-minute spell aside, the Americans were not overly convincing or dominating from the run of play. Some might even say they were poor.

“We have to do better. I told the team afterward I just thought it was some simple things,” said U.S. head coach Bruce Arena. “Our passing wasn’t good, we didn’t hold the ball up well enough, we didn’t move well enough off the ball. We have to be a little bit better.

“Give our opponent credit. I think they played us hard, they got in on a bunch of tackles that rattled us at times. We could’ve been a little bit better.”

The words “better” and “sharper” were tossed around quite a bit by Arena and his players during the postgame, and with good reason. The Americans, despite having heavy hitters like Clint Dempsey and Michael Bradley on the field, did not create much danger despite winning the possession battle 59 to 41 percent.

A lack of service to Dempsey and fellow forward Jozy Altidore contributed that, but so too were the overall absence of ideas and sharpness in the final third from the likes of Bradley, Darlington Nagbe, and Paul Arriola.

“Sloppy,” said goalkeeper Tim Howard of the performance. “Our passing needs to be better. We controlled large parts of the game. We just didn’t execute in terms of moving the ball through the midfield, doing it quickly. That needs to be sharper and better. We had giveaways in bad spots. They created chances based off our giveaways.”

For the Americans, this performance was not a one-off but rather an extension of how the U.S. has played to this point in the tournament. This Gold Cup has seen the Yanks underwhelm in all but a 3-0 victory over Nicaragua, and even that affair came with its struggles.

A stiffer opponent in Costa Rica awaits in Saturday's semifinal, and the U.S. is fully aware that it has to raise the level of play in order to continue the pursuit of its first Gold Cup trophy since 2013.

“We’ve got to be better putting our stamp on these games,” Altidore said. “Obviously, look, we won the game, we’re happy with it, but these are good exercises for us to now grow as a team and learn to dominate these games better.

“We can’t be coming out flat like that,” added Altidore. “As the games get tougher now, a good Costa Rica team, they’ll punish you if you come out like that.”

There is value in posting wins even when you are not performing at optimum levels, but the Americans have had a favorable road to the semifinals. Now, their first real test is on the horizon and with it comes the need to get better and sharper.

“We know it’s going to be a tough challenge,” said Dempsey. “We’ll have to be at our best to get to the final.”