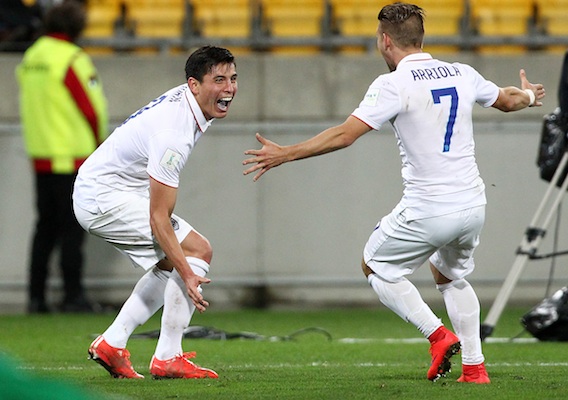 Rubio Rubin scored a ruthless goal in the 58th minute and goalkeeper Zack Steffen stopped a late penalty to give the U.S. under-20 men's national team a massive win in the U-20 World Cup in New Zealand.
BY John Godfrey Posted
June 10, 2015
7:35 AM
JURGEN KLINSMANN'S senior national team couldn't win a knockout round game last summer in Brazil, but Tab Ramos' under-20 men's squad stared down a big, tough, talented Colombia team early Wednesday morning and emerged with an impressive 1-0 win.

The young Yanks will now face Serbia in the U-20 World Cup Quarterfinals on Sunday in Auckland (12:30am ET, Fox Sports 1).

The decisive goal came just before the one-hour mark, and it occurred against the run of play. In a rare moment of U.S. possession in an advanced position, U.S. captain Emerson Hyndman headed a ball forward from just outside the penalty area. Paul Arriola took a swipe at the 50-50 ball and it deflected off Colombian defender Juan Quintero before falling to Rubio Rubin, who rifled a laser into the upper right corner of the net.

A jubilant Rubin jogged to the sidelines to celebrate and his teammates piled on top of the Oregon native. They all looked thrilled—and perhaps a bit surprised—that they had grabbed the lead. The Americans would face plenty of adversity over the final 30 minutes, but the players fought hard and held on for the victory.

It was a rugged, chippy contest from the opening whistle, and neither team backed down from a challenge for the entire 90 minutes. In fact, the physical nature of the game forced Ramos to make an early change when forward Bradford Jamieson landed awkwardly after a fifth-minute challenge and had to be subbed out. Jordan Allen came on for the Los Angeles Galaxy forward, leaving the Yanks with a solitary striker for the second game in a row.

Unlike the Ukraine match, which the U.S. lost 3-0, the team was up for the challenge Wednesday. Ramos' team played a high-pressure game and consistently sought to play the ball through the midfield. Colombia did the same, and the opening 45 minutes featured some lovely, contentious, aggressive soccer.

Colombia had the size and strength advantage, and put plenty of pressure on U.S. central defenders Cameron Carter-Vickers and Matt Miazga. But the Americans defended well as a group and never allowed their opponents much time on the ball. As the halftime whistle blew, Colombian had the advantage in possession but not on the scoreboard.

Rubin's ruthless goal changed the dynamic of the match completely. For the next 10 minutes or so the U.S. did a good job holding the ball and forcing its opponents to chase the game, but an increasingly desperate Colombian team eventually established more control through the midfield and pushed hard for an equalizer.

And they nearly got it.

In the 81st minute, Colombian attacker Rodin Quinones turned U.S. defender Kelly Acosta along the right side of the end line and inside the penalty area. Acosta got his hands up on Quinones, who went to ground. Croation refereee Antonio Ivan Bebek immediately called a penalty and brandished a second yellow to the FC Dallas defender, who was forced to leave the field.

On the ensuing penalty, however, American goalkeeper Zack Steffen came up huge, feinting to his left and then diving to his right to block Jarlan Barrera's low, well-struck shot. Arriola pounced on the rebound and blasted it into touch as Steffen's teammates congratulated the former University of Maryland backstop.

There was no time to celebrate, however, as Colombia came right back at the Americans on the subsequent play. Arriola headed Colombia's curling corner right in front of goal but it fell to Deinner Quiñones, who created space for himself and struck a ball that seemed destined for the far corner of the net. But Arriola was there again, clearing the ball off the line and defusing the attack.

Down a man with seven minutes left in regulation, the Yanks proceeded to take the air out of the ball, clogging the middle and challenging Colombia to take low-percentage, long-range shots. Ramos brought in a pair of substitutes, too, disrupting the flow of the contest and getting some fresh legs onto the pitch in John Requejo and Tommy Thompson.

As time ticked off the clock, the Americans did a masterful job of holding off Colombia despite having just 10 men on the field. And when the final whistle blew the entire American contingent sprinted onto the field, swarming Steffen and Rubin as the dejected Colombians stared and, in at least one case, sobbed on the pitch.