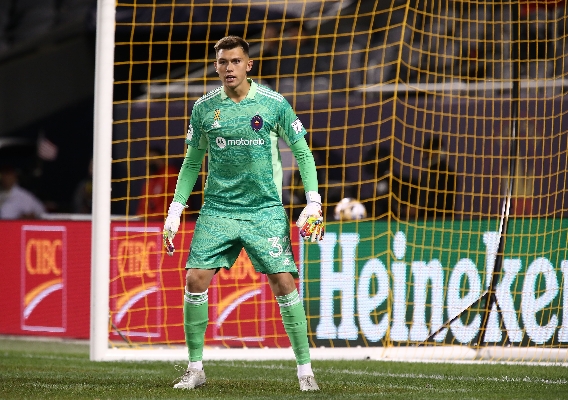 U.S. U-20 goalkeeper Gaga Slonina emerges as a key part of Chicago's future

Gabriel Slonina, 17, has emerged as one of the young breakout players in MLS this season. It sets the stage for a busy 2022 as the Addison, Illinois native will look to help the Chicago Fire return to relevance while also playing a big role with the U.S. U-20 team. ASN's Brian Sciaretta spoke with Slonina on his breakthrough and his future.
BY Brian Sciaretta Posted
October 20, 2021
8:25 AM

THE 2021 MLS season was another strong season for young players. Some of the top stories in this area are well known as Gianluca Busio, 19, was top-notch for Sporting Kansas City and secured a move to Venezia. FC Dallas forward Ricardo Pepi, 18, was one of the league’s best American goal-scorers and is now playing a big role with the U.S. national team in World Cup qualifying.

Among this impressive list of accomplishments from young players, Gabriel Slonina (who goes by the nickname “Gaga”) also stands out. The young Chicago Fire homegrown became the youngest goalkeeper to ever start an MLS game on August 5th against New York City FC when Bobby Shuttleworth was unable to play due to injury.

At just 17 years and 81 days old, Slonina was the youngest starting MLS keeper by over 18 months. Since then, he’s made seven more starts and has posted three shutouts – including a 0-0 draw in his debut against NYCFC. On Saturday, he made some important saves in a 2-2 away draw against the league’s best team this season, the New England Revolution.

While Chicago has no hope of playing in the postseason and is playing under an interim coaching staff after the dismissal of Rapha Wicky, Slonina is making a strong case that he will be the team’s starting goalkeeper in 2022. 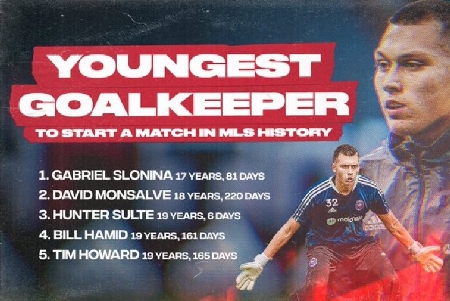 “I always believed in myself,” Slonina told American Soccer Now. “That's super important in a young player to always believe in themselves and to continue to put in the work when no one's watching. I set some goals for myself and it's amazing that I was able to accomplish most of them because it's really difficult for a young player to get involved in the first team and then start to perform and play well and gain the trust from their teammates.”

The nature of the goalkeeping position typically favors older players. There is little rotation and goalkeepers often play well into their mid 30s. As a result, older goalkeepers tend to have an easier time establishing the trust of their players and their backline.

Earning that trust at such a young age has been the biggest challenge for Slonina and it is something that he has been working towards well before his debut. In addition to playing well and training hard, it has been the little things like staying behind to collect balls and equipment, and help carry things back to the training room after practice.

“That trust that's seen on the field from the older players was developed long, long before I was on the field,” Slonina explained. “They saw how much work I put in. I'm super passionate and professional about this profession, so I think that trust was gained far back before you guys first saw me on the field. I think they started believing in me when they saw me performing trainings and doing extra work. I don't treat it as if they're 20 years older than me, and they don't treat it as if I'm 20 years younger than them. When you're on a field, none of that matters. That's super important.” 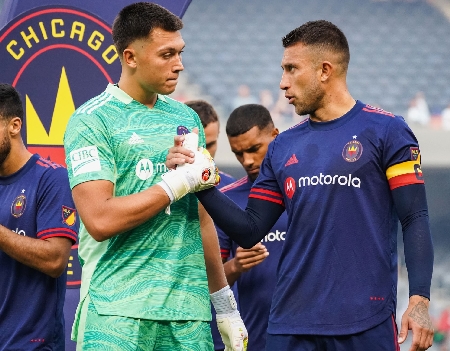 "It's really difficult for a young player to get involved in the first team and then start to perform and play well and gain the trust from their teammates," he added. "All the work that you put in does really pay off. The other things that you do - that people aren't watching or that they don't see, like going to the gym and stretching while everyone's leaving and then doing an ice bath and extra ice bath - they add up… When I played against New York, I didn't stop anything I had done before to get to that point."

Jonathan Bornstein is set to turn 37 in early November and is one of the veteran leaders on Chicago. The left back has vast experience including starting two World Cup games for the U.S. national team in 2010. At over twice the age of Slonina, Bornstein has been impressed with the quality and professionalism Slonina has shown.

"For him, getting minutes is very important for his development. I think, not only is he getting the games and development, but he's also playing very well," Bornstein said. "I think you know it's hard anytime you're getting your first games. I think he's also extremely professional on and off the field. I think he's got a huge future in front of him, so I'm excited for him to get these minutes. I think any player gains experience the more games they get… Overall, though, he's doing a great job and you've got to applaud his performances.” 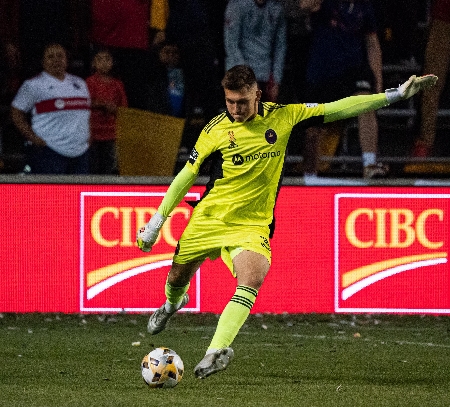 Slonina is a native of nearby Addison, Illinois and his older brother Nicholas, 20, is also signed to the Chicago Fire on a homegrown deal. Their parents immigrated to the United States from Tarnow, Poland and both players still have a lot of family back in Tarnow.

Growing up in Illinois, soccer was an important part of their lives and the gradual improvement of the Polish national with elite players such as Robert Lewandowski served as a huge motivation for both brothers. For Gabriel, soccer offered him a unique opportunity to pursue his dreams and stand out.

Still in high school, Slonina carries with him a professional mindset.

“I don't view myself as a high schooler anymore,” Slonina said. “I got into this mindset of really taking this job as a real opportunity to be something in this world. It's a shift of mentality that this something I have to take very seriously now. It's huge because the way you perceive yourself is how you act. How you behave in those actions, turn into your life. I changed my perception of who I am. I just view myself as more of a professional player now that that is trying to be the best every single day.” 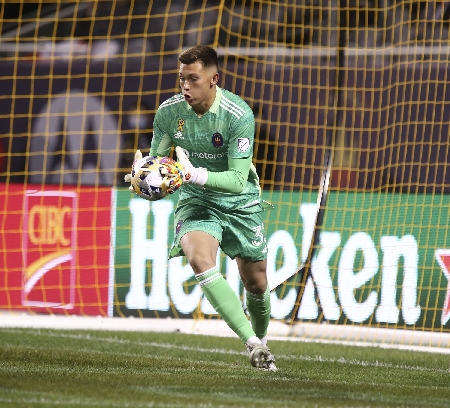 Immediately following this season, Slonina is likely going to shift his focus to the international stage with the United States U-20 national team. While that team is still without a coach, it is slated to begin its 2023 cycle with a tournament in Mexico in November. That will likely be followed by camps in January and March. Next summer, the team will participate in a tournament that will serve as qualifying for both the 2023 U-20 World Cup and the 2024 Olympics.

Slonina has represented the United States youth national teams before at U-15 through U-18 levels but the U-20 team has been extremely important to U.S. Soccer over the past decade in terms of preparing players for roles with the full national team. While the 2021 cycle was cancelled due to COVID-19, the teams in 2019, 2017, and 2015 all advanced to the quarterfinals of the U-20 World Cups.

Slonina’s breakthrough at the Chicago Fire puts him at a unique starting point for a U-20 team and he should be in position to be a big player on a team that already has a lot of breakout players throughout the league. U.S. national team manager Gregg Berhalter has already said he believes the team needs youth at the goalkeeping position and the recent defection of Real Salt Lake and 2019 U.S. U-20 goalkeeper David Ochoa to switch his international affiliation from the United States to Mexico hurt that cause.

The full national team is still a way off for Slonina and the U-20 national team and U-23 team national should keep him busy possibly through 2024.

For now he’s on a good path and he is excited for the possibilities with the U-20 team and to be part of an emerging generation of promising young American players.

“It's awesome to see players my age breaking through,” Slonina said on his generation of players. “When I was younger, I would see kids my age now breakthrough. I would think that I want to get there once in my life. Now that it's happening, it's a dream come true.”

“It's an honor to represent the country and play for the fans who cheer us on with the US national team,” Slonina said on the U-20 team. “That tournament is going to be huge - now they're also qualifying for the Olympics. I'll be honored if I get the call. I'll give my best, like always.”