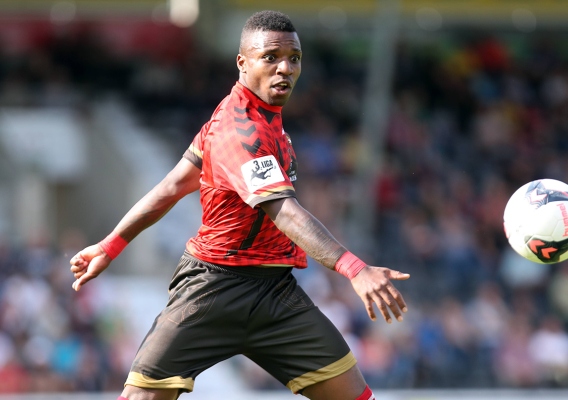 There is a lot of news to cover as the week comes to a close. Top Arsenal prospect Folarin Balogun opts for England, William Yarbrough and Joe Gyau are likely on the move, and ASN breaks down the new U.S. U-19 roster.
BY Brian Sciaretta Posted
May 03, 2018
4:20 PM
THE WEEKEND IS almost here and with that there is a lot of news in world of American soccer to cover. A pair of former national teamers look to be on the move while the U-19 national team heads to Slovakia. Here is a breakdown.


The United States U-19 team will be heading to Slovakia to play in the Slovakia Cup that will run through May 12. The U.S. team’s schedule is as follows:

With former U.S. U-19 coach Brad Friedel leaving U.S. Soccer to take over as head coach of the New England Revolution, the team’s new head coach Dave van den Bergh who previously coached the U.S. U-15 team. This marks his second camp leading the U-19 team.

Van den Bergh has called up 20 players for the upcoming tournament.

There are some interesting names on this roster, including three players who will begin their careers in Germany. Taylor Booth is unattached but is aiming for a move to Bayern Munich as soon as he can secure his Italian passport – as ASN has learned. New Jersey native Chris Gloster left the Red Bulls academy last year and joined Hannover 96. Finally, Zyen Jones also left the academy at Atlanta United to sign for FC Schalke.

On the domestic front, there is some impressive firepower. Sebastian Soto of the Real Salt Lake academy and Kyle Holcomb of Pateadores (and a rising Wake Forest freshman) have put up huge numbers in the Development Academy with a combined 70 goals in 47 games

This group of players will be looking to break into the U.S. U-20 team this cycle although is typically a year younger than most of the players in the pool. The U.S. U-20 team is also set for an upcoming camp starting later next week in Florida.


According to 3.Liga-Online.de, Sonnenhof Großaspach’s American winger Joe Gyau will be on the move following this season. Gyau, 25, has had a difficult history with knee injuries but should complete this season well over 2500 minutes.

With two games remaining, Gyau has five goals and four assists. Sonnenhof Großaspach has had a difficult season where it sits in 14th place in the 20 team league.

According to the report, Sonnenhof Großaspach wanted to bring Gyau back but that he had other plans. It is unclear of that will be Germany or elsewhere.


Folarin Balogun, 16, is the leading scorer for Arsenal’s U-18 national team and as a result is going to have international options. Although it is not listed by the club, ASN learned recently that Balogun was born in the United States and is eligible internationally for the U.S., Nigeria, and England – but had yet to play for either.

That changed on Thursday as Balogun was named to England’s U-17 team for the U-17 Euro finals. It is very impressive for him to be named to the team for the finals despite having never played for the team before.

Should Balogun see the field at the finals, he could still represent the United States or Nigeria in the future but that would require a one-time switch with FIFA which would permanently tie him to that country’s national team.


According to the Mexican publication AS, the San Jose Earthquakes are considering making a move for Club Leon’s American goalkeeper William Yarbrough, 29, who was born in Mexico but has earned three caps for the United States national team – all of which in 2015.

San Jose has had a terrible start to the 2018 season with just five points through seven games and has conceded 15 goals. Yarbrough has won the Liga MX title twice – the 2013 Apertura and the 2014 Clausura.

Seattle set for a huge investment


It hasn’t been a great start to the season for the Seattle Sounders which has just four points through six games and is in last place in the Western Conference.

But help could be on the way soon as Garth Lagerwey made a huge announcement that club is going to drop a huge eight-figure investment on a designated player.