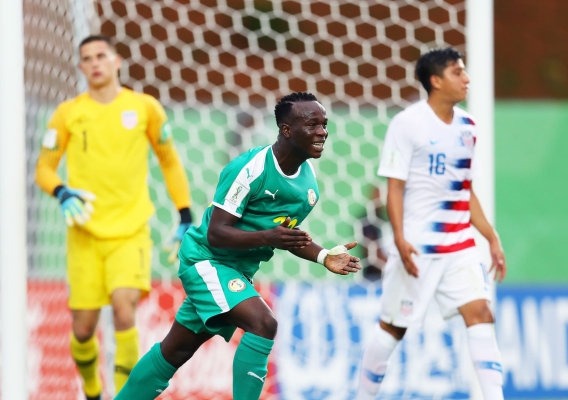 The U.S U-17 team opened its World Cup campaign in poor fashion with an ugly lopsided loss to Senegal. ASN's Brian Sciaretta breaks it down
BY Brian Sciaretta Posted
October 28, 2019
4:00 AM
THE UNITED STATES U-17 team got off to a terrible start at the 2019 World Cup with a 4-1 loss to Senegal in Brazil. After Gianluca Busio gave the U.S. team an early 1-0 lead, Senegal began to take control and earn the majority of scoring chances.

After equalizing just before the half, Senegal took control of the game in the second half and was lethal with their finishing with goals from Aliou Balde in the 72nd minute, Souleymane Faye in the 76th, and Pape Matar Sarr in the 88th.

It doesn’t get any easier, however, as the United States faces Holland and Japan to round out the group.

Here are a few thoughts on the game.

Sloppy play out of the back


The United States played in a similar fashion to the full national team lately where it attempted to build gradually out of the back in the attack. But with so many links in the chain, there was a greater likelihood of turnovers, which Senegal pounced on.

There was also a high amount of pointless possession. Many passes were backwards and lateral. It took a huge degree of effort to get the ball into the final third.

Senegal had less than 40% of the possession but a huge advantage in the number of shots. They were methodical and had purpose in how they played. It was extremely direct but effective.


The result of the game is that Ricardo Pepi, the team’s starting forward and most effective goal scorer, was completely taken out of the game. Long spells of possession usually resulted in turnovers with the ball never coming close to Pepi.

The U.S. needs to focus on getting the ball to Pepi (or Alfonso Ocampo-Chavez) quickly and repeatedly.


This team was poor defensively up the middle and once again, it highlights the need for a defensively strong No. 6 midfielder. There is no one help stop Senegal’s counter attacks or Senegal’s quick direct play up the gut.

There used to be many good No. 6 defensive players in the U.S. system. Kyle Beckerman, Pablo Mastroeni, and Chris Armas – just to name a few. Maybe they were under appreciated in their time but the program misses those types of players today. Beyond Tyler Adams, how many prospects are there in this position? Hassani Dotson, Brandon Servania, and Chris Durkin are a few, but you can immediately tell when a U.S. team is week in this position.