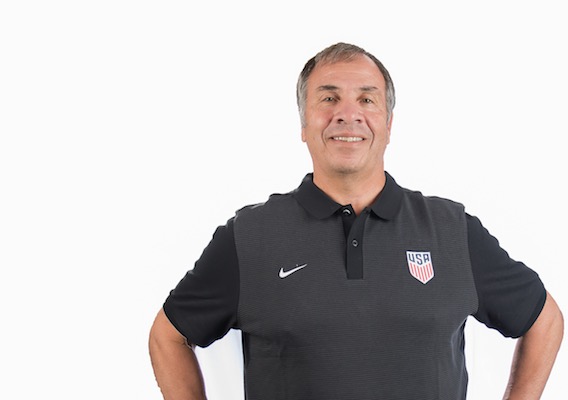 Frankie Hejduk, Tony Meola, John Harkes, and Tony Sanneh spoke to ASN about former and current U.S. national team coach Bruce Arena, and all four are convinced Arena has what it takes.
BY Brian Sciaretta Posted
November 29, 2016
7:50 AM

NO ONE QUESTIONS that the United States national team is in a difficult spot right now. After two losses to open the Hexagonal, it will have to turn things around quickly to earn a spot in the 2018 World Cup in Russia. Despite the doom and gloom among American fans following the embarrassing 4-0 loss to Costa Rica earlier this month, however, this isn’t the low point in the team’s history. Not even close.

The true low point came on June 21, 1998, when the U.S. suffered a humiliating 2-1 loss to Iran at the World Cup in France—a loss that eliminated the squad from the tournament and saw it finish dead last. Due to political tensions between Iran and the U.S., there was significant attention on the game. Because of the poor showing, American soccer was widely ridiculed and questions surfaced as to whether Major League Soccer would survive the fallout.

It was a different time and the the root causes of failure were not identical, but there is one key similarity between U.S. Soccer's troubling time in 1998 and its current predicament: In both instances, Bruce Arena was asked to clean things up.

“We’re in a very bad spot right now in qualifying,” former U.S. fullback Frankie Hedjuk told American Soccer Now. “Am I worried? Yes. Am I less worried now that we have Bruce? Yes. Bruce has built and rebuilt a lot of things but this is different. He's usually had a lot of time but not here.”

Hedjuk would know. He is one of the many players who has seen Arena work his magic. As one of the few Americans who played well in France he continued to be part of the program as Arena led a quick turnaround.

Just one year later, the United States defeated Germany at the 1999 Confederations Cup en route to a third-place finish. Enthusiasm for the team was back and it reached a high point when the team advanced to the quarterfinals of the 2002 World Cup before losing a hard-fought 1-0 match to Germany.

“He brought that 2002 team together really from nothing,” Hedjuk added. “Half were MLS guys, half were grinders in European leagues. He brought togetherness that no one really had before.

“You know what he does? He finds fighters and battlers and guys who are willing to go into the trenches. Maybe they’re not the most skilled players, like myself, but they have the heart, the soul, and attitude the U.S. team needs. Was I the best pick for left back in 2002 when I never played left back before in my life? No, I wasn’t. But Bruce was like, ‘I have to get this guy on the field because he’s a battler and a fighter.’

Like any coach, Arena has blemishes on his resume. His second cycle with the U.S. national team ifell apart after the Hexagonal as he stayed loyal to veterans like John O’Brien, Eddie Pope, Pablo Mastroeni, Brian McBride, and Claudio Reyna—players who could not replicate their 2002 performances in 2006. Arena's brief reign with the Red Bulls in 2006-07 ended badly. Finally, after years of dominating MLS, the Galaxy have stumbled in the playoffs the past two years.

But those chapters in his long career do not necessarily apply to the current situation. Arena's contract that will take him through the next 20 months, to Russia, and his assignment is to modify the culture, quickly, so that the Yanks qualify for the sporting world's biggest tournament.

IN 1978, when Arena was hired to run the men’s team at the University of Virginia, the Cavaliers had missed out on the NCAA Tournament for more than a decade. In 1979, Arena's side earned a spot in the tournament. In the 1980s it became the most dominant soccer program in college history.

In 1996 Arena took over D.C. United in the newly created MLS and promptly won MLS Cup in 1996 and 1997. That earned him the U.S. gig. Then, in 2008, he took over a struggling L.A. Galaxy team and quickly made it the most decorated team in the league. As a result, the Brooklyn native believes he is better coach now than he was during his first U.S. gig.

“I’ve learned a lot,” Arena said. “I’ve had 10 years on the field at the club level and I’ve had the opportunity to work with some of the most talented players in the world and understanding how they work and how to build a team. And I’ve continued to grow on the tactical side, continued to grow in learning how to deal with players, and learning how to plan and playing away and playing in big matches.”

FC Cincinnati coach John Harkes played for Arena at Virginia, D.C. United, and the U.S. national team. Perhaps better than anyone, he knows Arena’s approach in a variety of circumstances and he believes Arena's optimism will be calming on a player pool that is talented but rattled.

“His experience really gives him the confidence,” Harkes said. “He forms a strategy and a plan—always. He’s very organized. He has a very keen sense of players’ individual abilities and how to blend that together…. I think a positive attitude gives you power of the circumstances instead of the circumstances having power over you.”

“I would say that he is walking into a lot of uncertainty,” Harkes continued. “I think there’s been a lot of question marks about where guys stand individually but also where they stand collectively within this group, within the identity of the group, within the tactical approach. The national team job is tricky and it’s harder than a lot of people think.

"One of things I learned from Bruce, Bob Bradley, and Dave Sarachan—you have hard work, focus, dedication, desire, and passion. Those five things are characteristics that Bruce looks for in players but also in his staff. If he can get that, it will be a good environment.”

Tony Meola was another top U.S. player under Arena’s tutelage at Virginia and he went on to be the national team’s starting keeper at the 1990 and 1994 World Cups. Arena selected Meola to be the third-string keeper in 2002 behind Brad Friedel and Kasey Keller.

Meola has tried his hand at coaching in the NASL and as an assistant with U.S. youth national teams. He also serves as an occasional radio host/analyst on SIRIUSXM FC. He follows the team closely and believes Arena is the right person for the job, noting that the coach knows the players and is very aware of the current player pool both in MLS and abroad.

Above all, Meola just thinks that Arena will preach a different and more positive message to the players.

“It makes sense for a lot of reasons,” Meola said. “For one, the situation we’re in. He’s been through it. He knows the players. I think what he brings and what this particular team needs is someone to tell them that they’re a good group. Someone to tell them that they can play. For me, it’s been a little bit of a battered group with regards to hearing that with the guys that came back [to MLS] this was not good enough, that the guys overseas need to push themselves.

"After a while, I think little bit of uncertainty creeps in. It starts to become contagious. Bruce is the kind of guy who in a lot of cases has made people believe they are actually better than they are. And that’s a very difficult thing to do.”

“We need to build a chemistry with this team and have a common goal and really work on a team concept,” Arena said. “I really believe individually and positionally we have good players, and we’ve just got to get them working together as a team."

REGARDING THE PLAYER POOL, Arena does not have a lot of time with the team ahead of the March 24 qualifier against Honduras. He will get a chance to evaluate players during January camp but that will not include key key contributors in European leagues. Because of this, Arena acknowledged last week he will make some changes but nothing drastic.

Arena has said he will make trips abroad to meet with players and discuss his plans for the team, noting that he is eager to work with the current crop of young attackers.

Tony Sanneh first played for Arena in the early days of D.C. United but by the time the 2002 World Cup rolled around, the burly fullback was playing in the Bundesliga—first for Hertha Berlin and then for FC Nurnberg. In South Korea, Sanneh earned accolades for his performances at right back.

“It’s sort of like 1998," Sanneh said. "How is he going to infuse these two generations? It’s fixing the tires while the car is moving. You need guys who get you through but you also need the future.

"His biggest challenge will be [deciding] who to invest in to be his core team in this qualification process—quickly. Qualification is much different when you’re playing against very savvy professionals in a hostile environment. So you need to build a core group that is going to go battle for you and for the country.”

So what should the expectations be for Arena in 2017 with no margin for error and no time for a learning curve? Based on past experiences, many who know Arena are optimistic but believe that the challenge ahead is more daunting than many realize. Lost confidence looks to be a highly volatile aspect, something that nearly cost Mexico a spot in Brazil in 2014.

“I think he’s very qualified to take the job and he’s more qualified to take the job now than he was back then,” Sanneh said. “Back then, MLS was just sort of budding. For him, how could you infuse a younger generation and change the mentality? Now, he’s much more experienced but the expectations for the USA are much higher. I think players and fans believe that we are capable, and rightfully so, of being a top 12 team in the world.”

THE CONSENSUS among these veterans, certainly, is that the U.S. men's national team is likely to improve in 2017.

“There's going to be arguments as to whether or not he’s the right guy,” Meola said. “But one thing you can’t argue with is that he wins. And this team needs to win right now. He has the clearest path to winning.”

Harkes, who played with Meola in high school, college, and the national team, agrees.

“There is a lot to look forward to in the group,” Harkes said. “Maybe it takes management and the right words being said and the timing of it. The fan base wants to believe in something true again. Hopefully things go well for him. I think he’s going to do a terrific job. I have a lot of faith in him.”

What's your take on the Bruce Arena hire? Do you think he's the right man for the job or would you have preferred to see a different solution? Share your take in the Comments section below.