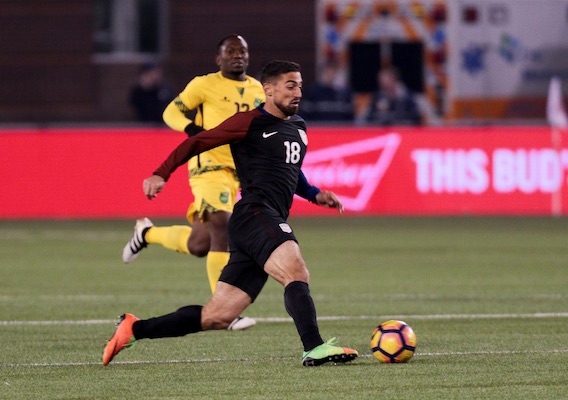 After a half-hearted draw against Serbia on Sunday, the U.S. men's national team showed more initiative and displayed better organization in a 1-0 win over Jamaica in Chatanooga.
BY John Godfrey Posted
February 03, 2017
6:25 PM

AFTER AN UNDERWHELMING performance against Serbia on Sunday, U.S. men's national team coach Bruce shook things up against Jamaica on Friday.

His starting lineup featured nine personnel changes, as veterans Michael Bradley, Alejandro Bedoya, and Jozy Altidore found themselves on the bench, replaced by the likes of Dax McCarty, Sebastian Lletget, and Jordan Morris. And the new coach showed his willingness to experiment with tactics, too: The single-striker setup that produced just one shot on goal five days ago was supplanted by a 4-4-2 alignment.

Granted, Jamaica is not an intimidating opponent but the U.S. showed good organization, good passing, and in a crucial moment Jordan Morris scored the only goal of the game to give the U.S. a well-deserved 1-0 win.

The U.S. generated the first half-chance of the game right around the six-minute mark, when McCarty got on a Benny Feilhaber corner kick and headed the ball just above Andre Blake's crossbar.

Four minutes later, tight defending forced a Jamaica turnover in the visitors' half of the field. Lletget found himself with the ball and promptly sprinted toward goal, only to be mauled by Jamaican midfielder Ewan Grandison.

Feilhaber took the subsequent spot kick from 30 yards out, floating a pass to the right side of the box, where Steve Birnbaum proceeded to nod the ball into a crowd in the center of the penalty area. Jamaica, however, cleared the ball away.

The Americans dominated possession in the first half, and evetnually established a sustained attack as the half-hour mark approached. Lletget and Jorge Villafana partnered well on the left side, creating multiple chances and delivering a serious of crosses that came close but never connected with the strikers.

A U.S. goal seemed imminent but then the Jamaicans broke out on a counterattack at the 33-minute mark. Jamaica's Cory Burke sped past U.S. right back Graham Zusi and blasted a pass across the face of goal. U.S. backstop Luis Robles got a hand on the ball before it ricocheted off Jamaican striker Romario Williams and over the endline.

A few minutes later the Americans generated another good chance. Walker Zimmerman's thundering heading from the U.S. half found Juan Agudelo who headed the ball into space. Morris displayed his game-changing speed to race onto the ball, but his less-than-stellar touch allowed Blake to charge out of goal and make a sliding save.

On the ensuing corner kick, the Yanks rolled out a clever set piece that nearly opened the scoring: Working on the right flank, Feilhaber found McCarty who laid off a perfect pass to Lleget on the edge of the Jamaican penalty area. The Los Angeles Galaxy midfielder curled the bar toward the far post and just missed putting the U.S. ahead.

As the first half ended, Lletget, Villafana, and McCarty stood out for the Yanks, while Pontius, Feilhaber, and Zusi struggled.

In the 59th minute, the Yanks showed some good combination play to create the first goal of the game. Lletget passed to Villafana who dished to McCarty who located Feilhaber in a dangerous spot in the center of the penalty area.

Feilhaber, who didn't move quickly enough in the first half, made a lovely first-touch pass to Jordan Morris. The Seattle Sounder striker tapped the ball back to Feilhaber, who responded by setting up Morris for a right-footed blast that flew into the back of the net.

In what may prove to be a telling move, Arena next brought in Bradley and Nagbe for McCarty and Feilhaber—giving the U.S. captain a chance to play with Nagbe on the left and Lletget in the center of the pitch. Those three could find themselves lining up against Honduras on March 24 in San Jose, Calif.

Jamaica couldn't put much pressure on a well-organized U.S. defense—Walker Zimmerman and Steve Birnbaum didn't have much to do, but they were solid—and by the 70-minute mark the Americans were holding the ball in the midfield and trying to draw Jamaica out.

The gambit made sense but the visitors, already eliminated from the 2018 World Cup, seemed content to keep the score close. Accordingly, very little space opened up and the Yanks failed to generate any meaningful scoring chances in the game's waning moments.

The U.S. did enough to beat a team it should beat, at home. And that's exactly what Arena's men will need to do against Honduras in a month-and-a-half.