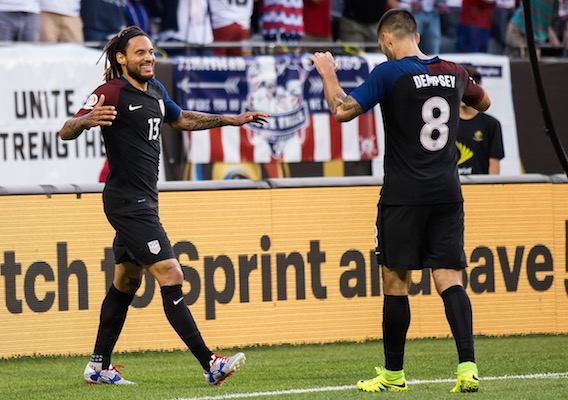 Clint Dempsey scored off a penalty kick in the ninth minute and then created two more goals to lead the U.S. men's national team to a comprehensive victory over Costa Rica in Copa America Centenario.
BY John D. Halloran Posted
June 07, 2016
10:00 PM

To start the contest, Klinsmann elected to make no changes to the starting XI or formation he used in the Americans' 2-0 loss to Colombia on Friday. Early on, that lineup stability did not seem to pay dividends as the Costa Ricans enjoyed the better of the play. The American defense gifted Los Ticos a number of chances in the first five minutes and Joel Campbell had an opportunity to give Costa Rica an early lead, but fired his strike from inside the 18 just wide.

However, thrown on their heels early, the Americans woke up and began to fight their way back into the contest. In the seventh minute, DeAndre Yedlin worked a bit of space on the wing and fired in a service. Bobby Wood was taken down in the area on the play and Clint Dempsey converted the ensuing penalty to give the Americans an early 1-0 lead.

After the goal, the Americans began to give the ball away repeatedly and Christian Balanos nearly punished their sloppiness in possession when he struck a hard shot directly at goalkeeper Brad Guzan in the 15th minute off a U.S. giveaway.

After slugging it out in the middle third of the field for the next 10 minutes, the Americans found the next chance when Gyasi Zardes shot from a tight angle into the side netting.

In the 33rd minute, Zardes had another chance when a bright combination between Alejandro Bedoya and Dempsey started a U.S. break. As Dempsey drew defenders into the middle of the pitch, it opened up space for Zardes in the box, but once again he missed the target, this time firing over the crossbar. Two minutes later, Dempsey repeated the attack, this time dishing the ball off to Jermaine Jones on the left. However, Jones also missed with his effort going wide.

However, the attacks seemed to show the Americans the blueprint they needed to break down the Costa Rican defense for the rest of the half and they continued to apply the same formula, using Dempsey to draw defenders to the middle of the field before finding his teammates wide for open chances. In the 35th minute, Dempsey found Jones again and, this time, Jones made no mistake hitting the target and doubling the Americans’ lead.

Seven minutes later, the U.S. attack struck again when Dempsey—again—found Wood in the final third. Receiving Dempsey’s pass at the top of the 18, Wood turned his defender and shot low near post to give the Americans their third tally of the half and they took a 3-0 lead into the locker room.

After the break, the Costa Ricans began to apply more pressure and the U.S., having switched into a 4-4-2 for the second half, took a few minutes to adjust. Los Ticos had two opportunities early in the second stanza firing two shots just off frame in the first 10 minutes, the most dangerous chance coming when Celso Borges slipped in between John Brooks and Johnson in the American 18 and nearly toe-poked home a pass across the face of goal.

After those nervy 10 minutes, the match settled down and the American defense solidified until an unforced error by Geoff Cameron in the 68th minute. Cameron mishit a clearance over the endline and gave up an unnecessary corner kick. Bryan Ruiz nearly punished the mistake, but his header on the ensuing service went off the post and away from goal.

The last, best chance for Costa Rica to get back into the match now gone, the energy noticeably dissipated from the Central American side. Graham Zusi’s finish in the 87th minute sealed the result for the U.S. as the Yanks cruised to the win and a much-needed three points.

The win momentarily put the Yanks atop Group A, with three points, a plus-two goal differential, and four goals scored. The U.S. plays its final game of the group stage against Paraguay on Saturday (7pm ET; FS1, UniMas, UDN) in Philadelphia with advancement to the tournament quarterfinals on the line.

What did you think of the match? Share your take in the Comments section below.