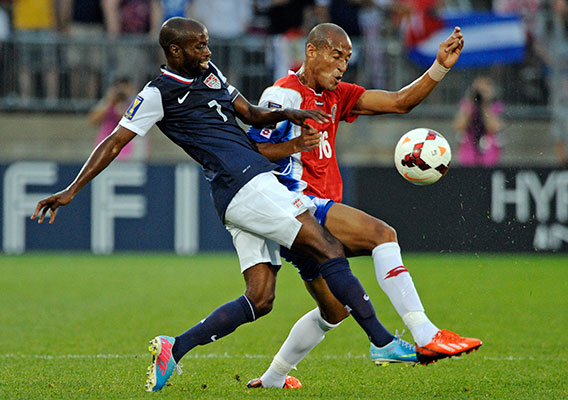 BY John Godfrey Posted
July 16, 2013
10:10 PM
EAST HARTFORD, Conn.—On July 15, United States men's soccer coach Jurgen Klinsmann said that he was treating Tuesday's Gold Cup match like a "final," adding that "we won't save anybody for the game against Costa Rica." On July 16, Klinsmann announced a starting XI that did not include Nick Rimando, Kyle Beckerman, or Joe Corona. It didn't matter. A lineup featuring Sean Johnson in goal and Michael Parkhurst at right back and Stuart Holden in midfield was good enough to beat Costa Rica, 1-0, and claim first place in Group C in the 2013 Gold Cup. The decisive moment in the match came in the 82nd minute. Following a brilliant close-range save by U.S. goalkeeper Sean Johnson, the United States countered down the right wing. Joe Corona released Landon Donovan. Donovan pushed ahead, found Brek Shea sprinting in the center of the pitch, and delivered a great cross. Shea's left-footed shot secured may not have a thing of beauty, but it secured the victory for the Yanks. "The pass was perfect," Klinsmann said afterward. It needed to be, because Costa Rica employed a defense-first approach that stifled the U.S. for long stretches. "It was pretty obvious game plan," Klinsmann said after the match. "A [five-man] back line. Very compact. They didn’t allow any space to go through. We ended up in a grind, we ended up in a battle." "They have quality players that can go at you, but they came out in a very defensive-minded shape," he said. "That shows a lot of respect for us." With the win, the United States will now face El Salvador on July 21 in Baltimore. Costa Rica will have to face Honduras—a tougher challenge. The game got off to a very slow start. Mix Diskerud made a couple of clever passes down the right wing to Alejandro Bedoya, but a defensive-minded Costa Rica side rebuffed those efforts. Jose Torres played like a man possessed, running tirelessly on both sides of the pitch and opening up several half-attacks. And captain DaMarcus Beasley chased down several long passes that could have led to chances down the left flank, but his crosses were either snuffed out or cleared away. Costa Rica enjoyed a few good moments of possession in the first half, primarily as a result of good one-touch passing in the midfield, but could it not muster much of anything in the final third of the field. All told, the first 30 minutes were a bit dull. But a light seemed to switch on for both teams right around the half-hour mark. In the 33rd minute, Costa Rica's Junior Diaz got on the end of Giancarlo Gonzalez's corner and executed a lovely bicycle kick from 12 yards out. He struck the ball hard, but it flew harmlessly a few yards over Sean Johnson's goal. Two minutes later, American midfielder Jose Torres responded with a dangerous cross of his own. He found striker Chris Wondolowski making a near-post run, but Wondolowski's header was parried into touch. The ensuing corner kick, again from Torres, was headed down by Goodson and landed near Wondolowski. The San Jose Earthquakes star attempted a cheeky backheel but Costa Rica goalkeeper Patrick Pemberton gobbled up the attempt. The best chance of all, however, came just before the halftime whistle. Central midfielder Stuart Holden ran onto a clever ball just to the right of the Costa Rican goal. Whether he was too eager or just too rusty, Holden fluffed the chance badly, stumbling over himself and kicking the ball into touch. It was ugly. The contest remained scoreless at intermission, and things picked up considerably after the interval. In the 55th minute, Jamaican referee Courtney Campbell made a call that changed the course of the contest. With the Americans on the attack and the ball bouncing precariously just outside the penalty area, goalkeeper Pemberton collided with one of his teammates and the ball landed at Wondoloski's feet 25 yards from goal. Pemberton, clearly outside the box, blocked Wondolowski's shot with his hands. He should have been given a straight red, but Campbell pulled out a yellow instead. Torres took the subsequent spot kick from 22 yards out and targeted the top right corner, but the goalkeeper stretched to his left and pushed it away. The rebound fell to Landon Donovan but he mishit his attempt and a great chance fell by the wayside. Though they had the better chances and far more of the ball, the Americans could not break through the Costa Rica defense. As the game reached the 70-minute mark, the U.S. grew increasingly satisfied with the scoreline. Ahead of Costa Rica in Group C based on goal differential, a tie would give the Yanks first place. Not surprisingly, Costa Rica stepped up its attack, pushing further forward and with greater urgency. And it cost them. The Ticos' best chance of the match came in the 80th minute, off a corner kick. Real Salt Lake forward Alvaro Saborio broke free from his defender on a corner kick and headed the ball toward the top corner of the goal. But Johnson, who had seemed nervous early in the match, sprawled to push the ball aside, saving the game for the Yanks. In the scramble that followed, the U.S. retained possession and countered. Landon Donovan sprinted down the right wing, spotted Brek Shea in space in front of goal and delivered a wonderfully flighted cross just outside the penalty area. Shea took one touch to gather the ball and then delivered a left-footed shot into the back of the net. The U.S. had a goal, the group, and a favorable quarterfinal matchup. "It’s only going to get only more difficult," Klinsmann said before heading back to the locker room. "In the knockout stage, you can’t make any mistakes." Stay tuned for quotes, player ratings, tactical analysis and more.