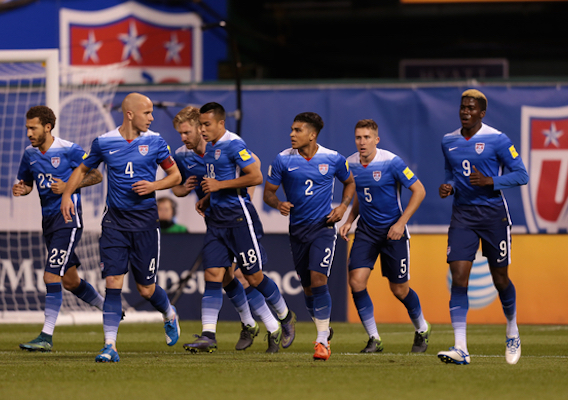 The Americans found themselves down early to an overmatched but game St. Vincent and the Grenadines squad, but quickly drew even and went on to post a 6-1 victory. Jozy Altidore tallied twice.
BY Noah Davis Posted
November 13, 2015
6:05 PM

ST LOUIS—The Road to Russia began with a series of firsts.

It was the first time Tim Ream, Bobby Wood, DeAndre Yedlin, Gyasi Zardes, and Jordan Morris appeared in World Cup qualifying. Matt Miazga and Darlington Nagbe made their first-ever appearances for the U.S.

And it was the first time since September 4 that the Americans got a win.

With Jurgen Klinsmann trotting out a mix of veterans and youth, the red, white, and blue should have had the experience and the firepower to dominate from whistle to whistle against a mostly amateur side. The coach put World Cup veteran pairing Matt Besler and Geoff Cameron at center back flanked by Yedlin on the right and Ream on the left. Fabian Johnson, Michael Bradley, Jermaine Jones, and Zardes made up the midfield, with Jozy Altidore and Wood up top.

But it was the visitors who scored a shocking goal in just the fifth minute.

Oalex Anderson picked up a failed Cameron clearance and cut inside on Yedlin. He then took a right-footed shot that tucked itself into the net to Brad Guzan's left.

While it was a very poor beginning, it was not a sign of things to come.

The U.S. responded just six minutes later on a wonderful sequence of passing. Zardes made a smart run and cut the ball back to Bradley who led Yedlin with a pass toward the touch line. Just before it went out the speedy full back sent a delicate chip to Wood's head and the forward's looping header beat Vincy Heat goalkeeper Winslow McDowall.

The game was tied, and the Stars and Stripes started to dominate possession. In fact, the ball rarely saw their half of the field. Wood should have made it two in the 16th minute, but his left-footed effort from a Johnson through ball went wide. Bradley forced a strong save from McDowall in the 22nd after beating two defenders and hitting a shot that flew straight at the netminder. Moments later, Zardes lashed a close-range effort wide.

The visitors could only keep the tie for so long. The second goal came off a free kick just before the half-hour mark. Altidore drew a foul at the top of the box. He and Johnson lined up over the ball. The latter man took it, his shot deflecting off a St. Vincent defender in the wall and spinning to McDowall's left as the keepr dove right.

The Yanks scored a third goal two minutes later. A short corner glanced off one of the visitors and flew to the back post, where an unmarked Altidore tapped it home with his head. It was his 30th goal in 88 international matches, the third-fastest U.S. player to reach that mark.

While the U.S. couldn't get a fourth in the remaining quarter hour, the first half still ended a lot better than it had begun.

The second stanza began much as the first ended, with the Americans controlling possession. In the 51st minute Cameron added a fourth for the U.S. after Wood flicked on a Johnson corner kick. The ball flew across the box to the defender and his reaction header curled into the top right corner.

Zardes tallied a well-earned fifth goal in the 58th minute. The Los Angeles Galaxy attacker picked up a pass that Altidore slipped between two defenders, then he displayed a bit of flair by nutmegging the goalie while falling down.

If there had been any question before then, it was official: the rout was on. The only questions remaining were the final score and who would sub into the contest.

The answer to the second question arrived quickly. In the 64th minute, Miazga and Nagbe came on for Cameron and Johnson. As they walked on to the field, they became officially cap-tied to the U.S. Four minutes later, Morris replaced Wood.

Goal six came on a passing sequence that went Bradley-Jones-Zardes-Jones-Altidore, who posted up his defender, turned one way, cut back, then roofed a deflected shot with his left foot. By this point in the match, the Americans were physically superior in every way.

The U.S. will look to make it two in a row on Tuesday against Trinidad and Tobago in Port of Spain.