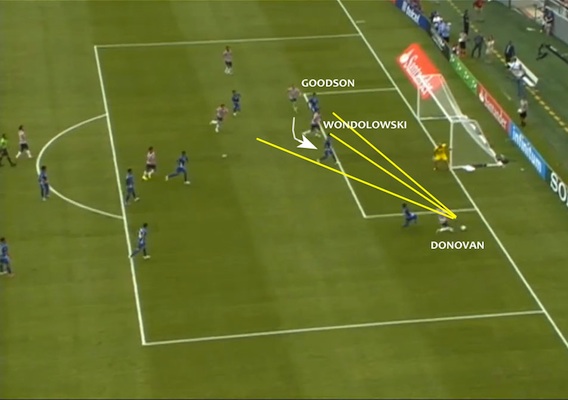 U.S. Owns El Salvador, But Could It Have Won Better?

Despite a four-goal final cushion in Sunday’s Gold Cup quarterfinal, the Americans could have made life easier for themselves with some minor changes, writes ASN tactician Liviu Bird.
BY Liviu Bird Posted
July 22, 2013
9:10 AM

EL SALVADOR PROVIDED another stiff test for the United States in its run toward the CONCACAF Gold Cup final, even if the U.S. won the match 5-1. El Salvador is an inferior team that the U.S. has always dominated, but it still provided a couple important coaching points for Jurgen Klinsmann. The men in blue came into the match highly motivated, playing in front of what was essentially a home crowd in Baltimore. Their best player, forward Rodolfo Zelaya, caused problems almost every time he touched the ball. Both teams played variations of a 4-4-2 formation. El Salvador held fairly flat central midfield and forward pairings, rotating which player stepped up and which player filled in underneath. The U.S. had more defined roles, as Kyle Beckerman swept underneath Mix Diskerud in midfield, and Landon Donovan roamed farther south than Chris Wondolowski. Jose Torres and Joe Corona stayed narrower than traditional wingers, allowing outside backs DaMarcus Beasley and Michael Parkhurst to overlap often. As a result, El Salvador’s wide midfielders, Osael Romero and Andres Flores, could not get forward much.

Beckerman controlled the tempo for the Americans again, pulling the strings in the back half of the field and in the beginning stages of possession. He was all over the middle of the field, owning the area around the center circle. Offensively, he connected on 70 out of 80 passes. Defensively, he recorded 10 recoveries. In the OPTA data bank for the match, he completed 117 actions, the most of any player on the field. By contrast, his partner, Diskerud, played more chaotically. He missed a couple of good opportunities to score before putting one away late in the game, and he generally looked out of sorts. In comparison to Michael Bradley, who usually plays the No. 8 role Diskerud filled on Sunday, the new guy just looked a couple rungs lower on the ladder.

A Period of Domination

When the U.S. went up 2-0 toward the end of the first half, El Salvador looked strung out. The Americans completed a couple of long passing sequences, possessing the ball to death and just missing on a couple chances to score a third and squeeze the life out of El Salvador’s game.

The crowning moment was a 25-pass, nine-player sequence that lasted a minute, 23 seconds without an opponent touching the ball. Nearly the entire attack occurred in the attacking half of the field, and the end result was Michael Parkhurst having a shot saved out for a corner kick. At this point, with over 10 minutes to halftime, the U.S. needed a third goal. Coaches often talk about killing games off and not letting opponents hang around because if they can get a goal, then they will find some energy and get right back into the game. That’s exactly what happened when Zelaya chipped a penalty over goalkeeper Nick Rimando in the 39th minute. From that point until the U.S. scored its fourth goal in the 78th minute, El Salvador seemed to feel that any sequence could be the one that made it a close game again. For the U.S., it was a missed opportunity. The best teams in the world—regional champions and World Cup winners—have a killer instinct and an ability to go for the throat at crucial moments. All the U.S. needed was one of its chances to fall between its second goal and El Salvador’s only goal. It didn’t, and the brief period of American dominance vanished, to be replaced by an unnecessary dogfight in an elimination game, at least until late in the contest.

Donovan was the reason the U.S. scored five goals against El Salvador, and performances like this one will see him back in the World Cup qualifying roster in September. All tournament long, he has shown leadership through his composure and ability to deliver in key moments. From middle and wide spaces alike, Donovan is an assist machine. He racked up three more on Sunday, along with a finish of his own, proving that he is still at the top of his game. In addition, he provided three key passes (completions that lead directly to a shot) and 16-of-20 passing in the attacking third of the field. One misplaced pass came on an unsuccessful free kick, and another, bizarrely, was his assist on the opening goal of the game. Because his attempt was initially blocked before it found a way through the defender, it counted as an incomplete pass. Never was his acumen more apparent than in that first U.S. goal: Clearly, this one was drawn up on the training ground, but it took Donovan’s awareness—and a bit of deft passing from Michael Parkhurst—to bring it full circle. The turning point was Donovan’s recognition of open space and his reading of El Salvador’s defenders.

When Parkhurst receives the ball, after Torres and Donovan exchange passes, the two defenders who covered the short corner turn their attention to Parkhurst. Both run toward the ball, and Donovan keeps his feet moving and his brain switched on. Parkhurst could swing a pass into the crowded penalty area, but it could float too close to the goalkeeper or be easily cleared. Instead, he sees Donovan bending his run toward the end line and plays a ball into his path.

The position Donovan attacks, at the end line, is a more dangerous spot for a cross because instead of putting an aerial ball into the box that essentially turns into a 50-50 situation, he can drive a pass along the ground toward any of three (in this case) intended targets. If a defender gets to it first, he will be facing his own goal, which is always a risky proposition. Clearing a cross in this situation is difficult because it could easily turn into an inadvertent shot on target for the opposition. In the end, Donovan picks out Clarence Goodson, and he rolls it over the line.

When the Going Gets Tough…

Against a team like El Salvador, failing to kill a game off may not have poor consequences. In truth, the U.S. never looked uncomfortable, even when its opponent found a second wind after scoring. But in big-game situations (an eventual final against Mexico, and in a must-win World Cup game), the oversight could prove costly. Think back to the 2009 Confederations Cup final, when the Americans took a shocking 2-0 lead into the locker room at halftime against Brazil. Also remember, more recently, the World Cup qualifier against Jamaica in Kingston, when the U.S. needed a stoppage-time winner to avoid throwing away a 1-0 lead. People will get caught up in the 5-1 score from Sunday and think the job was done, but likely not many turned off the television at halftime of the Confederations Cup final. The biggest stages in world soccer will expose any weaknesses. The U.S. has to learn how to kill off an opponent when it is at its weakest. Liviu Bird is the Cascadia regional editor for SoccerWire.com, as well as an ASN contributor. Follow him on Twitter.