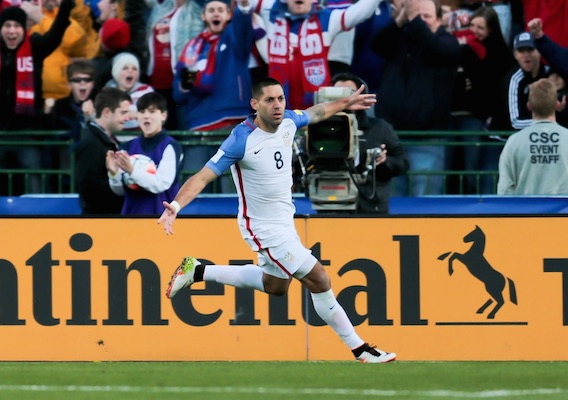 On Friday night an inspired Guatemalan national team could do no wrong in front of its home fans, outplaying, outsmarting, and outscoring the United States en route to a shocking 2-0 victory.

Tonight in Columbus, Ohio, the Yanks reveled in the comforts of home, jumping out to an early lead and dominating Los Chapines by a score of 4-0.

Given Friday's pathetic display, and the tenuous nature of its World Cup qualifying status, the U.S. men opened the game with an appropriate level of desperation. With Guatemala opting for a bunker-counter approach from the opening whistle, the Yanks were clearly on the front foot, pressuring the ball defensively, and looking for a quick turnover that they could turn into a tone-setting early lead.

Graham Zusi, who was a late add to the roster, ran after every ball with a fervor that set the tone for the team. DeAndre Yedlin showcased his world-class speed. Edgar Castillo pushed forward, Kyle Beckerman stepped up, and Michael Bradley probed the defense.

And then Clint Dempsey scored the goal everybody had been waiting for.

At the 12-minute mark and with the U.S. in possession, Gyasi Zardes made a strong run down the center of the pitch. Noting this, Geoff Cameron lofted a ball toward the Los Angeles Galaxy attacker. Trailing two defenders, Zardes shrugged the ball back into space. A wide open Dempsey proceeded to jog onto the ball and blasted a right-footed shot from 16 yards out that swerved past Guatemala goalkeeper Paulo Motta and into the back of the net.

But the game was still far from over.

As the first half wore on and Guatemala stayed within striking distance, you could almost feel the pressure rise off the shoulders of the visitors and settle back on the Yanks. By the 30-minute mark, Guatemala began to establish a bit of possession, increasing the tension within Mapfre Stadium.

And then the U.S. doubled its lead.

It looked extraordinarily easy: At the 36-minute mark Bradley curled in a quality spot kick from 30 yards out. Cameron eluded his marker, ran onto the ball, and headed it into the back of the net.

Six minutes later the U.S. could have put the game away as a rampant Zardes broke down the sideline to intercept a Guatemala pass, dribbled forward, and then released Dempsey into space. The Seattle Sounder had several options available to him—shoot, pass to Bradley, or pass to Bobby Wood—but he couldn't figure out which to do and fumbled the chance.

Still, the halftime score was a mirror reflection from Friday's game: the home team led by two goals and the visitors looked utterly clueless.

"Tonight," Taylor Twellman said just before the half, "everything has gone the United States' way."

Twenty seconds into the second interval, something else went the Americans's way.

It started innocently enough, as Yedlin cut in from the right flank and directed a pass toward Zardes. The Hawthorne, Calif., striker couldn't control the pass but the deflection landed at the feet of an onrushing—and still sprinting—Zusi, who struck the ball cleanly and inside the far post.

United States 3, Guatemala 0. With 44 minutes and change left to play, the game was over.

The U.S was so dominant, in fact, that it begged a question: Where was this team Friday night?

With the game in hand, another question surfaced as the clock wound down: Would Christian Pulisic, the 17-year-old Croatian-American, make his U.S. debut?

Indeed he would, coming on in the 81st minute for Zusi. The fans roared their approval as the Borussia Dortmund midfielder ran onto the field and officially pledged his allegiance to the United States.

The crowd roard again when Jozy Altidore scored a garbage-time goal to make the final score 4-0.

Has the U.S. national team solved its many problems? Is Klinsmann the right man to lead this team to the 2018 World Cup in Russia?

For at least one night, those questions will be drowned out by the screams of jubilant American fans.