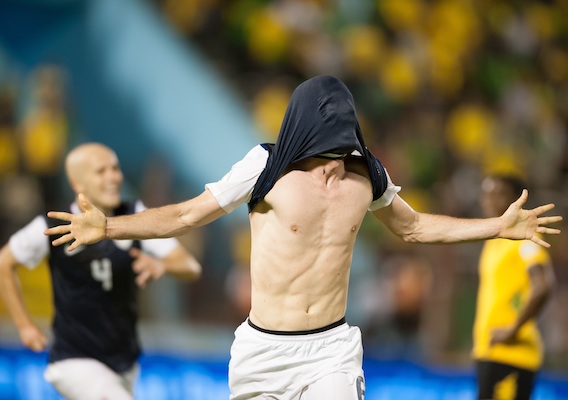 Brad Evans scored a stoppage-time goal to give the United States a 2-1 World Cup qualifier victory over Jamaica in Kingston. It was a huge strike for Evans, and an even bigger result for the Yanks.
ASN Slideshow

BY John Godfrey Posted
June 07, 2013
11:52 PM
Jurgen Klinsmann did something Friday that he had never done before as coach of the United States national team—he started the same lineup two games in a row. And it worked. Sort of. Though the Americans did not play particularly well and squandered a late lead against an exhausted opponent, Brad Evans scored a stoppage-time game-winner to give the U.S. a 2-1 road win over the Reggae Boyz. The victory, an American first on Jamaican soil in World Cup qualifying, temporarily lifted the U.S. into first place in the Hexagonal round of World Cup qualification. "It makes traveling a little easier," Klinsmann said. "What's important is that this team now gets more and more the mentality to bounce back and to kind (of) challenge themselves to win here, not to look for a tie. We said that from the beginning; we are ready now to come into a difficult place like Kingston and say we want the three points." It was a bizarre match and in many ways an archetypal CONCACAF qualifier: rugged, ragged, chippy, and choppy. The U.S. nearly took the lead 90 seconds into the match when, after a series of tight passes, Michael Bradley took a shot from 15 yards out that ricocheted off the Jamaican upright. The Americans followed that up with high-pressure defense and solid ball control and seemed to have the Reggae Boyz on their heels. But then: nothing. The game slowed noticeably by the 10-minute mark as tight marking and poor passing plagued both offenses. Neither side looked dangerous and the game lacked structure and focus. Until the 30-minute mark, that is, when Graham Zusi got free on the right flank and delivered a delicious cross to an unmarked Jozy Altidore in front of goal. Altidore, looking a lot like the lethal AZ Alkmaar striker who dominated the Eredivisie, nodded the ball home past Donovan Ricketts to put the Americans ahead. Smelling blood, the U.S. tried to turn up the pressure but Jamaica quickly regained its composure and the game once again settled into a tense midfield battle. In the 39th minute, Jamaica's Ryan Johnson and Rodolph Austin engaged in a clever give-and-go that befuddled Evans and created a fantastic scoring chance. Austin ended up with a breakaway opportunity on U.S. goalkeeper Tim Howard, but his right-footed shot hit the upright and the first half ended with the U.S. ahead 1-0. Neither team mustered much of an attack for the first 25 minutes of the second half. In the 70th minute Bradley floated a pass to Dempsey in the Jamaican penalty area, but the U.S. captain headed the half-chance over the crossbar. Beyond that, neither goal was seriously threatened. Ankles and shins were under constant siege, however. It was a very nasty match, and the visiting Americans were on the receiving end of most of the stray kicks. As the match approached the 80-minute mark, Jamaica started pushing forward in a desperate attempt to even up the score. Eager to claw its way out of last place in the Hexagonal yet exhausted from playing Mexico just three days earlier, this tack exposed the Jamaican back line to multiple U.S. counterattacks. But the Jamaicans got even before the Yanks could kill off the game. With the American defense napping, Jermaine Beckford got on the end of Austin's curling spot kick and headed it past a defenseless Howard. It appeared as though the Jamaicans had salvaged a tie despite doing very little to deserve the result. Before disappointment could set into the American side, however, the Yanks struck back. After earning a corner in the second minute of stoppage time, the ever-astute Bradley noticed that the Jamaican defense was playing back, so he played a short corner, received the ball back, and spotted Evans in the penalty area near Ricketts' goalmouth. Unmarked, Evans turned and slotted the ball into the back of the end to put the Americans ahead to stay. “It was a totally blind shot,” Evans said after the match. “The only thing in my mind was turn and shoot. That was it.” Evans received a yellow card for pulling his jersey over his head to celebrate the goal. He seemed OK with that. “Pure elation after the goal, for sure. I had no idea it was stoppage time.” It was without a doubt the biggest goal of Evans' career, and it more than made up for his sloppy play earlier in the match. With the victory, the U.S. now has seven points in four games in the final round of World Cup qualification, and is in a very good position with two Hexagonal home matches later this month. John Godfrey is the founder and editor in chief of American Soccer Now.