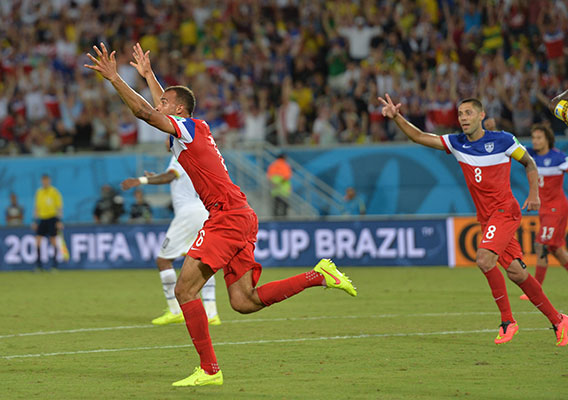 In one of the most thrilling soccer matches in U.S. history, the Americans defeated Ghana, 2-1, on a late headed goal by John Brooks. It was one for the ages, and John Godfrey has more here.
ASN Slideshow

BY John Godfrey Posted
June 16, 2014
8:06 PM
NATAL, Brazil—Energy pulsated within Arena das Dunas a solid hour before the United States began its 2014 World Cup campaign. As the opening whistle drew closer, the fans started chanting, "I believe that we will win!" over and over, drowning out the vastly outnumbered Ghana fans. The U.S. starting lineup announcements took the decibel level even higher. "The Star-Spangled Banner" was ear-splittingly loud. And then, exactly 29 seconds after the opening whistle, the stadium truly erupted. That's when United States captain Clint Dempsey took it upon himself to put his team in front, cutting down the left flank, dribbling past defenders with his right foot, and sending a left-footed shot off the far upright and into the back of the net. United States 1, Ghana 0. And just 89 minutes and 31 seconds left to go. "We didn't play our best game," Dempsey said afterward, "but we ground out a result. We showed a lot of character." In a tense struggle that featured end-to-end action, multiple momentum shifts, and drama to spare, the U.S. ultimately prevailed when substitute John Brooks nodded home a Graham Zusi corner kick to give the Americans a hard-fought—and oh so crucial—victory. Dempsey's lightning-quick strike was the first of many explosive moments in a fierce battle between two teams that have squared off in three successive World Cups. In the first half alone there were violent clashes, pulled muscles, kicks to the head, blood, and ill will. From the second minute on, however, neither team created any meaningful scoring chances in the first half. But that doesn't mean it was a dull game. Quite the contrary. The game took a massive turn in the 23rd minute when Jozy Altidore grabbed his left hamstring after a long run down the left flank and had to be stretchered off. U.S. soccer officials later called it a strained hamstring. Aron Johannsson came on to replace the 24-year-old Altidore, who was wincing in pain as he left the field. And if that wasn't enough, approximately 10 minutes later it appeared as though Dempsey would have to come off when Ghana's John Boye went up for a challenge and kicked the U.S. goal scorer in the nose, drawing blood. Dempsey stayed on the ground for a few minutes while trainers attended to him, but he gutted it out and stayed in the match. Defending in numbers much like they did in its World Cup warmup against Nigeria, the U.S. back four played a solid 45 minutes and looked nearly impenetrable. Ghana pushed forward in spurts, but was called offside multiple times, negating any forward momentum. The second half begin with an unplanned substitution that added to the tension among American supporters: U.S. defender Matt Besler, a sturdy and reliable veteran, came off in favor of 21-year-old John Brooks. Besler had clutched his hamstring late in the first half. Brooks was tested soon after arriving, as Ghanaian striker Asamoah Gyan faced him down in a one vs. one confrontation inside the penalty area. The Hertha Berlin central defender held his ground well, and Gyan was called for a foul that erased the threat. Midway through the second half Ghana nearly scored on back-to-back chances less than a minute apart. In the first, a long range shot curled just wide of goal. Just after that, a streaking Gyan got on the end of a beautifully weighted cross from the left flank and, totally unmarked, headed it over the crossbar. Another header from Gyan just a few minutes after that, flew wide of a sprawling Tim Howard. By the one-hour mark, it was plain to see: Ghana was on its front foot, and the U.S. was reeling. Without Altidore's holdup play and vertical threat, a resilient Ghana flooded the midfield and controlled possession. The U.S. couldn't maintain possession in the enemy half, Ghana controlled the midfield play, and it seemed like it was only a matter of time before the Black Stars evened the score. Around the 70th minute, the Black Stars nearly did. Gyan had yet another chance in front of goal, but U.S. defender Geoff Cameron deflected the shot away from the goalmouth and out of danger. In the 82nd minute, however, Ghana tied things up. It was a beautiful strike created by—you guessed it—Gyan. He sent a slick back-heel pass to a charging Andre Ayew, who struck the ball with the outside of his left foot to beat Howard on the near post. Game tied. Eight minutes left. It was anybody's guess as to what would happen next. And then Brooks put the game away for the Americans. The six-foot-four broke free from his marker in the six-yard box and nodded Zusi's cross down and into the back of the net. The crowd went absolutely bananas, and the Ghanaian players looked absolutely dejected. Neither team deserved to lose this one, but Ghana did and is now keeping Portugal company at the bottom of Group G. The U.S., meanwhile, grabbed three points and is now even with Germany. It was a game both teams needed to win, and the Yanks pulled it off. What did you think of the match? The Comments section awaits you and your strong take. John Godfrey is the founder and editor in chief of American Soccer Now.