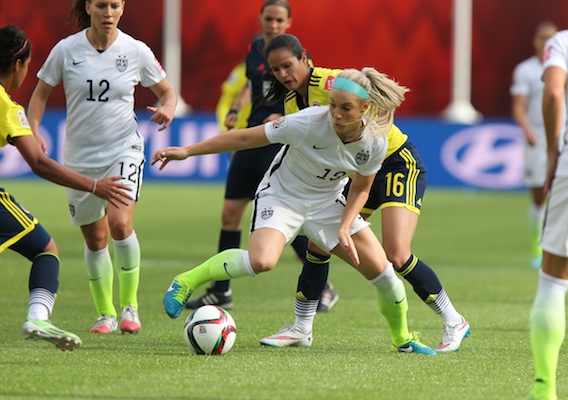 Alex Morgan and Carli Lloyd scored for the Yanks and the U.S. defense held strong to send the Americans into a quarterfinal showdown against China on Friday night.
BY John D. Halloran Posted
June 22, 2015
11:30 PM

ON A CRAZY NIGHT in Edmonton—which included a red card, eight yellow cards, and two penalty kicks—the United States women’s national team advanced to the World Cup quarterfinals with a 2-0 win over a feisty Colombian side.

After battling to a scoreless draw through the first 45 minutes, and despite another night of struggles for the American offense, the U.S. finally took charge of the match in the second half. A Colombian red card in the 46th minute reduced the South American side to 10 players and the U.S. found two goals courtesy of Alex Morgan and Carli Lloyd to get through to the next round.

Up until Colombia went down a player, the South Americans not only hung in with the United States but even at times looked like the more dangerous side. While the U.S. fruitlessly pounded the ball forward into the box throughout the first stanza, the Colombians looked sharp with quick-passing combinations and some terrific individual skill.

At the half, the possession numbers were nearly identical and Colombian goalkeeper Catalina Perez—who was third on the team's depth chart entering the World Cup, is only 20 years old, and is a sophomore at the University of Miami (where she is also a backup)—had kept the U.S. at bay with some strong saves.

When the U.S. did finally break the Colombians down early in the second half, with Morgan getting onto the end of a quick through ball from Megan Rapinoe for a breakaway, Perez took Morgan down and received a red card.

A penalty was also given—dubious given that it looked to have occurred on the line of the 18-yard box—but Abby Wambach missed the ensuing spot kick nonetheless.

Still, the damage was done as the Colombians, now down a player, never looked the same and the U.S. quickly established control of the match.

Wambach misses the frame on the PK https://t.co/yxjnqgikoU

Four minutes after Wambach’s missed penalty, the U.S. finally found the breakthrough when Ali Krieger picked up a loose ball in the corner and found Morgan in the box. The striker turned and fired a right-footed shot to the near post where it snuck in to put the U.S. ahead. Lloyd then doubled the American lead in the 65th minute on a penalty after Rapinoe was taken down in the box.

I sincerely hope the #USWNT wins the World Cup so I can forget about the way we actually played... #WomensWorldCup

Certainly, the world of women’s soccer continues to improve, but the U.S. offense simply needs to be better. In the Americans two previous matchups with Colombia—in the 2011 World Cup and 2012 Olympics—the U.S. won 3-0 and did so in more convincing fashion. And in this World Cup, the U.S. offense has struggled since minute one.

The U.S. women had better hope the old mantra holds true. With the offense still misfiring, it has been the American defense keeping the team in games. Julie Johnston and Becky Sauerbrunn have been fantastic all tournament long, with Hope Solo coming up big when needed.

Combined with Meghan Klingenberg and Krieger as the outside backs, the defensive group has now started 10 games together and picked up eight shutouts in the process, including three in four games during this World Cup. The quintet currently owns a 0.2 goals against average in its 10 matches together and have not allowed a goal in 333 minutes.

When American Soccer Now spoke with midfield stalwart Carli Lloyd back in January, she predicted that the U.S.’s defense, not its offense, would be key: “At the end of the day, defense wins championships," she told us. "I know it's clichéd, but we have to be a strong [defensive] unit."

For her own part, Lloyd has been a mixed bag in this tournament. She did pick up a goal against Colombia via penalty—her first tally in 11 games. The goalless streak has been so uncharacteristic for the normally prolific attacking midfielder that one must go back to 2008 to find the last time she started such a stretch. Perhaps the penalty strike will be what she needs to get on track in this tournament, but the part that most fans have probably missed this World Cup is Lloyd’s excellent defensive work.

Again on Monday night, Lloyd was a monster in the middle, winning tackles and numerous 50/50 balls. It might not show up on the score sheet, but if the U.S. is going to rely on its defense to win games, Lloyd will need to continue to do the dirty work for the Americans in the middle.

Up next for the Americans will be China on Friday night (7:30pm, Fox Sports 1). However, the U.S. will head into the game without two key midfielders, Megan Rapinoe and Lauren Holiday, who both earned yellow cards against Colombia and will be suspended for the quarterfinal matchup.

Both players will be missed—especially Rapinoe, who has created nearly every offensive chance for the U.S. this entire tournament. But this is where the U.S.’ depth should come into play. . Morgan Brian, who is an excellent player in her own right, can slot in for Holiday in the center of the pitch while Christen Press can replace Rapinoe.

Up top, as hard as it may be to accept for some fans, head coach Jill Ellis should stick with the Wambach-Morgan combination. The two have a great chemistry together and connect well, while Wambach’s holdup play against Colombia was surprisingly good.

The U.S. also continues to rely on set pieces and service from the flank to generate the bulk of its chances and, like it or not (missed chances and all), Wambach is still the team’s best target player in the area.

Certainly, the U.S. could improve the quality of its services—many of which were overhit, or played behind the goal—especially on dead balls where Holiday and Rapinoe couldn’t seem to find their range on Monday.

The last time the U.S. played China, at the International Tournament of Brasilia in December, the two teams drew 1-1.