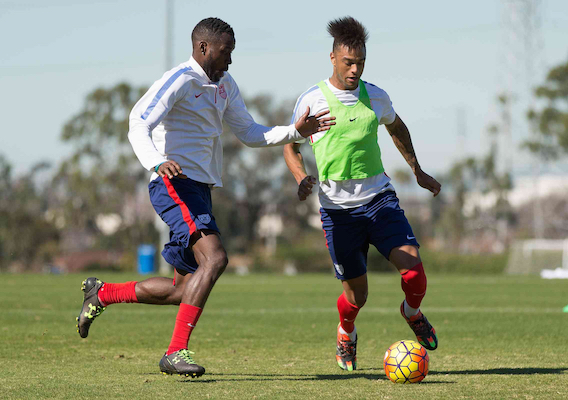 U.S.-Canada Preview: Find a Way to Beat the Bunker

While it's hard to get too excited about a friendly with Canada, the U.S. men's national team is likely to face a bunkering defense—the same sort of opposition it will see in upcoming World Cup qualifiers.
BY Brian Sciaretta Posted
February 04, 2016
6:45 PM

AFTER AN ENTERTAINING 3-2 win over Iceland on Sunday, the United States men’s national team will host Canada on Friday night (10:15pm ET, FS1) to conclude its annual January camp.

For more than a few players, a solid performance against Canada could mean securing an inside track for a spot on the Copa America roster this summer. So yes, this games mean something more than yet another friendly against the United States’ northern neighbors.|

Steve Birnbaum: With a goal and an assist in 45 minutes against Iceland, Birnbaum gave one of the better performances last weekend. The D.C. United central defender performed well at January camp in 2015 but failed to break through, and the competition at his position is now even more intense: John Brooks, Matt Besler, Matt Miazga, Omar Gonzalez, Geoff Cameron, Ventura Alvarado, and Michael Orozco are all vying for minutes. A good showing against Canada will be crucial for him.

Kellyn Acosta: It was somewhat puzzling to see Acosta, normally a midfielder, get the start Sunday at left back, especially considering his struggles at that spot at the U-20 World Cup last summer. But Acosta acquitted himself well against Iceland, and he could switch over to right back against Canada. Klinsmann loves versatility and has praised Acosta in recent weeks, which could mean we will see more of him Friday.

Lee Nguyen: The New England Revolution midfielder started out in a wider role against Iceland but was very effective when he tucked in centrally. The Americans are loaded with central midfielders but there is a dearth of midfielders capable of playing behind the forwards—a role Nguyen fits best. If he is able to create against Canada, Klinsmann might finally find room for him in 2016.

Tony Tchani: The Cameroon-born Tchani gave the U.S. some grit in the middle in the second half against Iceland, a welcome sign. Klinsmann has always had a robust selection of defensive midfielders to choose from, but many of them are now on the far side of 30. Tchani, in his prime, should get another chance here to state his case.

Darlington Nagbe: Nagbe’s likely to be part of the team moving forward after his inclusion in the November World Cup qualifiers. But Klinsmann is having the same problems most managers have with Nagbe: finding the position that suits him best. Could Friday provide a clue?

Canada is going to be useful practice for the United States, which can expect the same defensive-minded gameplan that upcoming 2018 World Cup qualifiers are likely to feature.

There’s no way around it: Games will be ugly. It’s going to take a moment or two of terrific individual quality to earn the three points in CONCACAF qualifying, particularly on the road. Think of Alan Gordon’s stoppage-time cross to Eddie Johnson in 2012 for a win over Antigua and Barbuda, or Clint Dempsey’s assist to Jozy Altidore in a 1-0 win over Honduras in 2013—great individual plays often make the difference in this region. Maybe Friday will give an attacker or two a chance to shine in crunch time.

Ethan Finlay was ineffective against Iceland, an unfortunate development given the team’s need for players out wide. Gyasi Zardes had a very nice touch on the build-up to Altidore’s goal but was inconsistent. The lone bright spot out wide came in the form of Jerome Kiesewetter, who was strong off the bench despite rarely playing for Stuttgart’s U-23 team these days.

Another question is whether anyone else will emerge as a threat up top; Altidore, it seems, starts there regardless of form because he’s the only effective option. Jordan Morris was a late arrival in camp because of his Werder Bremen trial, but after a week of training, will he get a chance at an extended role?

Two of the goals against Iceland came from defenders. The United States’ attackers need to—at the very least—match that output.