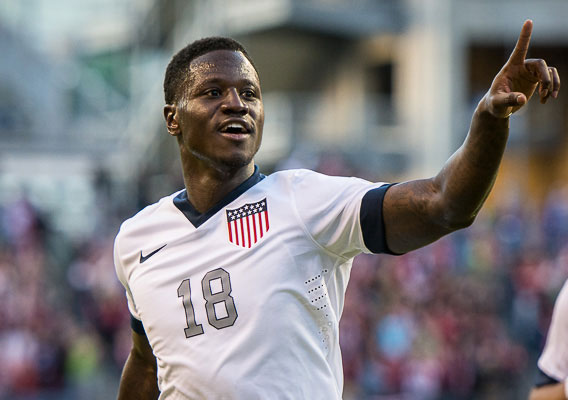 In what head coach Jurgen Klinsmann called a "complete performance," the Americans dominated the visiting side in front of more than 40,000 in Seattle. Liviu Bird reports from the scene.
ASN Slideshow

BY Liviu Bird Posted
June 12, 2013
2:10 AM
SEATTLE—All it took was one prick for the Panamanian defensive bubble to burst. The United States defeated Panama 2-0 in front of 40,847 boisterous fans at CenturyLink Field on Tuesday to take the lead in the CONCACAF Hexagonal Round. “We’re very pleased with our performance,” head coach Jurgen Klinsmann said after the game. “I think throughout the entire game, we were in control of it. Every area on the field, the guys did their job.” Michael Bradley had a hand in many of the U.S.’s early chances, including when he smacked a volley toward the bottom left-hand corner, only to be inadvertently blocked by Clint Dempsey on its way to goal. After a cagey start, Bradley was also the catalyst for the first breakthrough. He surged forward on the dribble to begin a counter-attack, passing off to Fabian Johnson on the right flank. The winger pinpointed his cross along the ground, making it easy for Jozy Altidore to tap in at the far post. “Big credit to Fabian: he joined in a strong way,” Bradley said. “The ball he gave to Jozy was perfect, and Jozy’s movement was exactly what you’d expect a goalscorer to do.” Altidore has scored in the last three U.S. games. The first goal in that string, which came during a 4-3 win over Germany, was his first for the national team since Nov. 15, 2011, against Slovenia. Before his goal in Jamaica five days later, Altidore had not scored in a World Cup qualifier since Sept. 5, 2009. “He knows that he has our full support in his development,” Klinsmann said. “Often, we forget how young he still is.” Panama nearly equalized just before halftime, but Luis Tejada was narrowly offside before finishing past American goalkeeper Tim Howard. It looked as if Panama would make the second half an entertaining battle, but the reality after the restart was the exact opposite. The U.S. dominated the second half, pouring chance after chance toward Jaime Penedo in the Panama goal. Hometown hero Eddie Johnson provided the killer goal in the game, timing his run perfectly to meet Geoff Cameron’s curling ball over the top. The Sounders attacker took a touch to control the pass, then beat the Panamanian backstop. “We wanted to add another one to kind of finish things off,” Klinsmann said. From that point, the U.S. had several opportunities for a third. Dempsey one-bounced a volley off the crossbar in the 66th minute, and DaMarcus Beasley hit the post after a short exchange between Dempsey and Altidore put him in behind. Penedo rushed out to meet him, forcing Beasley to hit a quick shot off the left post. In stoppage time, Beasley picked up his second yellow card in qualification matches, meaning he will miss next Tuesday’s match in Salt Lake City against Honduras through suspension. Howard said he does not expect the team to miss a beat, even though Beasley has started at left back since the March 22 win against Costa Rica. “We were worried about yellow cards tonight, and [referee Roberto Garcia] was only too happy to give us some,” said Howard, who picked up a booking of his own for time wasting. “Thankfully, right now is going to be the longest stretch between games we’ve had in a couple weeks, so we’ve got some time to work on it. Guys have been sharp.” The temporary grass surface, which was a big talking point leading up to the game, was hardly mentioned post-game. Instead, the atmosphere took center stage. The crowd in Seattle was the seventh largest of all-time in U.S. home qualifiers, and it made its presence felt throughout the U.S. team. “For me, you can’t talk about the game without talking about the crowd,” Bradley said. “Unbelievable. The best crowd I’ve played [in front of] in the United States, without a doubt.” The U.S. will hope for a similar reception next week, when it plays Honduras at Rio Tinto Stadium. The Americans will play for the first time this Hexagonal with sole possession of first place, their 10 points topping the table. “We just need to get points after points. Next week is huge,” Klinsmann said. “I’ll say it the day before the game again: it’s a must win. At home, you’ve got to win your games.” Liviu Bird is a freelance journalist based in Seattle. He is also American Soccer Now’s resident tactical expert. Follow him on Twitter.