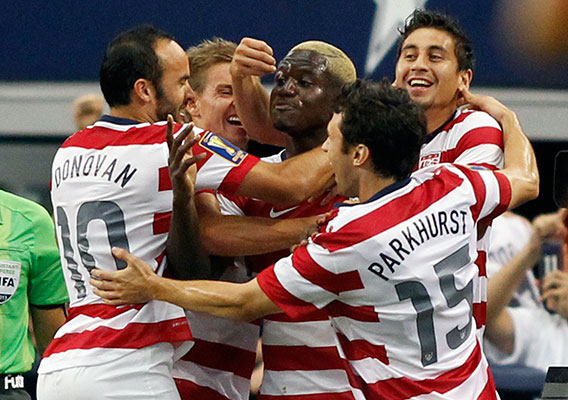 Landon Donovan scored twice to lead the United States to a convincing 3-1 Gold Cup semifinal victory over Honduras. The finals await the Yanks Sunday night in Chicago.
BY Jon Arnold Posted
July 24, 2013
10:31 PM
ARLINGTON, Texas—Landon Donovan moved his team a step closer to the Gold Cup and himself closer to the Golden Boot with a two-goal, one-assist performance in a 3-1 win against Honduras.

The United States’ all-time leading scorer looked the part Wednesday with a masterful performance against a Honduran team that had built itself on strong defense, hoping to avoid its third Gold Cup semifinal loss to the Americans.

That all went out the window just 11 minutes into the match when Clarence Goodson, a gangly center back who has improbably been incredibly helpful in attack this tournament, bombed a ball forward to Donovan. With his back to the goal, the Los Angeles Galaxy midfielder drew in a center back and played the ball right into the path of Eddie Johnson. Johnson rushed forward, ended up one-on-one with Donis Escober, and calmly knocked it past the Honduran keeper.

The U.S. did a bit of defending for the next 10 minutes, but was back on the front foot in the 27th minute when Alejandro Bedoya, a surprise starter after struggling in the tournament’s earlier stages, lofted a ball over Brayan Beckeles to Donovan. Donovan played the ball off his chest and hit it in before Beckeles or Escober had any hope of putting up a defense.

From there, the team was coasting to another easy Gold Cup win. “I guess I would have expected it to be probably be a little more difficult up to this point,” Donovan said. “We know Sunday’s going to look different than any of these games have. It’s a testament to this group and how we’ve done.” In addition to Donovan’s marquee performance, Johnson made a strong case to start the Gold Cup final (and make the World Cup roster) with intelligent movement, creating great chances for the Americans. Stuart Holden also played well, and made it through the full 90 without getting injured on the poor field at Cowboys Stadium.

Down two goals after a half, Luis Suarez tried to get a boost after the break, bringing forward Jerry Palacios and Marvin Chavez into the attack. It looked like the Colombian manager’s substitutions might shift the game. Midfielder Andy Najar was fouled by DaMarcus Beasley, and Chavez took the resulting free kick. His ball found the rising right back Nery Medina whose rocket header was untouchable for Nick Rimando.

After struggling to get anything going forward, it looked like los Catrachos might gain some momentum, down just a goal.

But Donovan and friends were having none of it.

Just a minute after the Medina tally, Goodson found Bedoya in the box. Donovan rushed past Osman Chavez, and Bedoya teed him up perfectly for a tap-in that would’ve been easy for a pub player. The Gold Cup’s all-time leading scorer made quick work of it.

“We were able to even up things a little bit in the second half of the game to a certain point, but even then the U.S. was really superior,” Honduran manager Luis Fernando Suarez said.

With the game in hand, Klinsmann brought out some of his veterans with Donovan and Beckerman making way. “Even having a rest for 20 minutes I think will help a lot,” Donovan said.

If only he could’ve also rested himself. Klinsmann got into it with the referee after a foul late in the game and was sent off. “I apologize for that reaction,” the manager said. “It was not meant against the referee, against nobody, it was just frustration because you fear for the health of your player in that moment, so I apologize for that.”

Since coaches can’t be carded, there is no automatic suspension. The CONCACAF Gold Cup Discpilinary Committee will get a report from Costa Rican referee Walter Quesada and rule within a day or two whether the German can be on the sideline in the final.

“Rightly so, he sticks up for us, but I don’t have any complaint about that,” Beasley said. “Hopefully CONCACAF sees that it wasn’t too malicious and he can be on the field with us on Sunday.

Luckily for the Stars and Stripes, Donovan received no such suspension, and the star midfielder will be on the pitch hoping to steer his country to hardware once again.