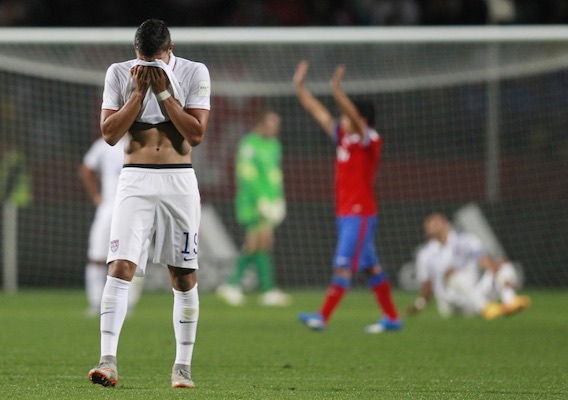 U-17 Squad Loses to Chile, Adding to U.S. Soccer Woes

The Yanks needed a win againt host nation Chile to advance out of the group stage of the U-17 World Cup. Instead, Richie Williams' men lost 4-1, continuing a run of poor form for a reeling U.S. men's program.
BY Brian Sciaretta Posted
October 24, 2015
9:30 AM

RICHIE WILLIAMS' U.S. U-17 men’s national team crashed out of the 2015 World Cup on Friday with a 4-1 loss to hosts Chile at Vina del Mar. The disappointing result was the latest setback for U.S. Soccer in what has been one a dreadful year for the men's program.

Entering the game the U.S. controlled its own destiny, needing a win to guaranteeing passage to the knockout rounds. In the end, though, the Americans had no such luck on a day when they truly deserved none.

As in the 2-2 draw against Croatia, the Yanks started off strong Friday, taking the lead after Luca de la Torre set up Brandon Vazquez for a 1-0 advantage in the 10th minute. Following that goal, however, the wheels completely came off, and whatever positive play the U.S. team had established early fell by the wayside.

In the 20th minute, failed clearance from the U.S. defense found its way to Marcelo Allende, whose shot deflected off Danny Barbir and sailed past keeper Will Pulisic to even the game.

In the second half, Chile played inspired soccer, but its first lead of the match came in controversial fashion. Gabriel Mazuela was played deep into the box in the 52nd minute and toe-poked the ball past Pulisic for a 2-1 lead, although replays showed Mazuela used his hands to control the ball ahead of the shot.

Chile soon showed it was worthy of the scoreline—and then some. Dominating after the break from endline to endline, the hosts got late goals from Gozalo Jara (on an outside-the-box curler) and Camilo Moya (with a stoppage-time strike) and rightfully turned the game into a rout.

There is absolutely nothing positive to be gleaned from the men’s side of U.S. Soccer these past few weeks.

The senior team followed up its terrible Gold Cup showing by losing to Mexico in the CONCACAF Cup. As a result, there will again be no Confederations Cup for the Americans this cycle.

The U-23 team, meanwhile, missed out on its easiest chance to secure an Olympic berth. Instead, a lackluster 2-0 loss to Honduras in the semifinals forced the Americans to beat Canada in the third-place game just for the right to play a two-game playoff with Colombia—where the Yanks will be the heavy underdogs.

The U-17s were expected to compete well at the World Cup, but in its three games the team was heavily outshot and out-toughed. Mental fortitude was an issue: After strong starts, the team folded easily, unable to raise its game to match its opponents’ intensity.Unfortunately for head coach Richie Williams, that reflects soundly on how he prepared the team for this tournament.

There’s more, too. Jurgen Klinsmann had a “very severe” word with Fabian Johnson, whose future involvement in the U.S. setup is suddenly uncertain. And the new U.S. U-20 team has already begun its new cycle poorly, losing to Germany 8-1 in a recent tournament.

U-17 crop couldn’t put it together

What's most discouraging about this U-17 side is that it appeared to be loaded with talent.

Throughout the cycle it could point to many strong performances against quality teams. This was not a bad team. Rather, it was an underachieving team.

It's easy to see why Borussia Dortmund rate playmaker Christian Pulisic so highly. De la Torre recently signed his first professional contract with Fulham and could be in line for his pro debut this season. Tyler Adams is likely to sign with the Red Bulls and perhaps earn first-team minutes next year. Alex Zendejas is likewise in a good position at FC Dallas.

But the all-important question resides in whether or not U.S. Soccer is going to have the right people and the right vision in place to allow that talent to grow and, perhaps, thrive.

After yet another setback on Friday, doubts remain.