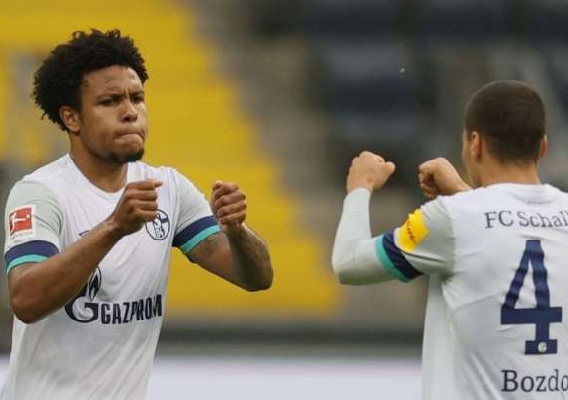 The games are getting more and more important in Germany as the season draws to a close. ASN's Brian Sciaretta breaks down all the midweek games involving American players in Germany and elsewhere in Europe.
BY Brian Sciaretta Posted
June 18, 2020
10:10 AM

THE SUMMER OF SOCCER is proving to be a welcome distraction to everything else. The Bundesliga is drawing to its conclusion but the Premier League is now back. Scandinavian leagues are back and even Italy, one of the nations hardest hit by COVID-19, is back. Then MLS will be back in just a few weeks to make it the first North American mens professional league to return.

All that is really good. For Americans abroad, the latest slate of midweek games have set us up for some interesting conclusions in Germany where players and coaches are fighting for promotions, against relegations, and for places in Europe.

The worst news for Americans is that Gio Reyna was forced to remove himself from Dortmund’s lineup due to “flu-like symptoms.” Fortunately, BILD reported that a COVID-19 test came back negative.

Here is what the midweek games taught us.

We knew that Werder Bremen was probably going to lose to Bayern Munich on Tuesday. And coming off a fantastic performance in a 5-1 win over Paderborn (with other results going its way), Werder looked like it had a real window for its survival.

Werder went onto lose 1-0 and Bayern clinched its eighth straight title. U.S. national team forward Josh Sargent played the final 28 minutes – which were uneventful. It was his first appearance against Bayern. He had 15 touches, a shot, and a key pass (he completed 4/8 of his passes). But the fact that Sargent came off this bench is a sign that Werder wants Sargent at 100% for the final two games of the season.

The problem for Werder wasn’t its loss to Bayern and the fact that it was a narrow one-goal loss is positive. The problem for Werder is that Fortuna Dusseldorf, which was even on points with Werder at the start of the week, came from behind with two late goals to draw third-place Red Bull Leipzig. It was an unexpected point for Fortuna that gave it a point advantage over Werder and a two goal advantage in the goal differential tiebreaker.

To make that worse, Mainz found a way to upset Dortmund to give it a huge likelihood of survival. Still, it can’t take its foot off the gas pedal against Werder this weekend and now also has momentum after beating one of Germany’s best teams.

With two weeks to go. This is what it looks like.

Werder Bremen still has a very realistic chance of survival but that would almost certainly entail overtaking Fortuna and winning the playoff. Both Werder and Fortuna have manageable schedules. If Werder loses to Mainz and Fortuna defeats Augsburg this weekend, Werder is done.

Either way, Josh Sargent will have to play a big role in the uphill survival push.

Weston scores in another loss

It was a familiar story on Wednesday, Schalke failed to come away with a win but Weston McKennie was one of best, if not the best, player for Schalke. This time it was a 2-1 loss on the road to Eintracht Frankfurt.

McKennie, 21, started the game slowly but grew into the game and ended up having a great second half. That effort was highlighted by a 59th minute goal – the Texan’s third goal of the season. McKennie displayed his superior ability to leap to win headers. This time it was for a goal.

Despite the loss, Mckennie was excellent. Even while he’s been playing well, in this game he was vastly improved at taking care of the ball. His passing (30/31) was on the mark and he did not commit any costly turnovers. Defensively, he was solid in disrupting Eintracht from attacking up the middle.

Unfortunately, Schalke had no one else beyond Mckennie who could contribute and its winless skid is alarming. Of course, the team has been dealing with injuries, but it still should be better than this. It won’t be in danger of relegation, but manager David Wagner needs to try to end this skid before the end of the season to cool off his hot seat and give the team momentum heading into next season.

Some numbers: Schalke's winless skid hits 14 games. Since the last goal of its last win, Schalke has scored just 6 goals in 1202 Bundesliga minutes (39.3% of a season). 3 of those 6 goals have been scored by Weston McKennie #USMNT

One week ago, John Brooks was the most in-form American player in the game. His form has helped propel Wolfsburg into sixth-place in the Bundesliga.

This past weekend, Brooks wasn’t particularly sharp in a 2-2 draw with Freiburg where Wolfsburg squandered a two-goal lead.

But on Tuesday, Brooks struggled mightily in Wolfsburg’s 3-0 lead to Borussia Monchengladbach.

This doesn’t change that he’s had a very good year but there are always questions about Brooks’ consistency. Assuming he’s not benched for the final two games, it will be important for Brooks to rebound quickly.

U.S. national team midfielders Tyler Adams and Alfredo Morales both got the starts for their respective teams on Thursday when RB Leipzig hosted Fortuna Dusseldorf. It was a meaningful game for both teams but for different reasons. Leipzig was trying to clinch a spot in the Champions League next season and Fortuna was trying to move three points beyond Werder Bremen for automatic relegation.

In the end, neither team got what it wanted although the point was useful for both teams.

Tyler Adams was a steady presence in central midfield where he got the start at the No. 6 position. He made very few errors while he didn’t make a big impact offensively. His passing and ability to cover a lot of ground were on full display in this one.

Alfredo Morales, meanwhile, had a tough one. He was given a tough job to try to break-up all kinds of Leipzig attacks and he was once again very good in winning aerials – something that has always been his strength. But his passing was poor in this game and he was subbed out in the 81st minute with Fortuna down 2-0. Following his removal, Fortuna rallied for two goals to earn the draw.

Leipzig will almost certainly still qualify for the Champions League but the relegation battle between Werder Bremen and Fortuna Dusseldorf will be a tight one.

After fading into third place of the 2.Bundesliga with a poor result over the weekend, Stuttgart made a nice rebound on Wednesday with a convincing 5-1 rout over Sandhausen. After Hamburg played Osnabruck to a 1-1 draw on Tuesday, Stuttgart moved back into second place by a single point.

Matarazzo’s quest to become the first American-born and raised manager in the Bundesliga will be a close call.

With two games remaining, here is the story.

Stuttgart cannot clinch this weekend but the best results would be Heidenheim to win over HSV along with a Stuttgart to win over Nurnberg. That would not clinch but it would eliminate HSV from the 2nd spot. The only way Stuttgart would not get promoted on the final matchday would be if Stuttgart lost, and Heideinheim won to the point where it would overturn a likely very big deficit in the goal differential category.

Jesse Marsch and Red Bull Salzburg failed to win their first game since the restart when it played to a 0-0 draw on the road with Wolfsberger. With Rapid Vienna defeating Hartberg 1-0, Salzburg’s lead atop the table was reduced to five points with five games to play. This sunday will see Salzburg take on Wolfsberger again, but this time in Salzburg.

The Scandinavian leagues are now back and a bunch of Americans took part. In Sweden’s second round of games, Aron Johannsson started for Hammarby against Elfsborg on Wednesday and came off at halftime with Hammarby down 1-0. His team would rally for a 2-2 draw.

Also in Sweden, Mix Diskerud made his debut for Helsingborg in a tough 4-0 loss on the road to Kalmar. The Norwegian-born Diskerud came on to start the second half with his team down 2-0.

In Norway, Romain Gall earned the start for Stabaek and played 59 minutes in a 0-0 draw with Mjondalen. For Gall, it was his club debut after joining Stabaek on loan from Sweden’s Malmo.

Staying in Norway, Henry Wingo came on in the 88th minute for reigning champions Molde in a 4-1 away win over Aalesund.

In the Premier League, U.S. U-20 attacking midfielder Indiana Vassilev was an unused substitute for Aston Villa in a 0-0 draw with Sheffield United. Villa currently sits one-point deep in the relegation zone with four of its next five games against top seven teams in the league (Chelsea, Newcastle, Wolves, Liverpool, Manchester United).

In the 2.Bundesliga, Jan George came on in the 56th minute for Jahn Regensburg in a 2-1 win over Karlsruher.

Also in the 2.Bundesliga, Julian Green started and played 83 minutes for Greuther Furth in a 0-0 draw with fourth place Heidenheim. German-American Timothy Tillman played the final seven minutes for Furth as well.

Where will Eric Lichaj end up, but Hull City announced this week that its American captain will not return next season with his contract set to expire. He will also not play in the season’s remaining games.