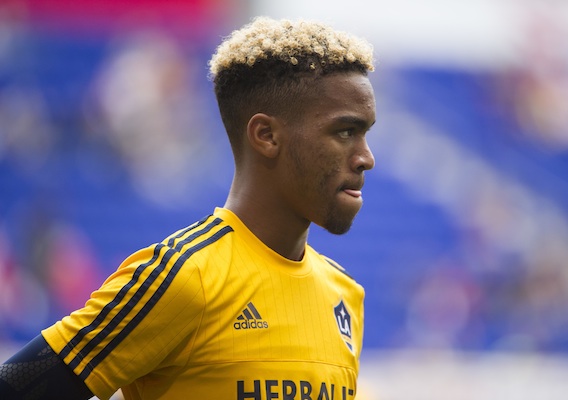 Junior Flores and Romain Gaill appear to be out. Desevio Payne and Jordan Allen are in. And U.S. U-20 coach Tab Ramos will hope that the 21 players he takes to New Zealand will get the job done.
BY Brian Sciaretta Posted
May 07, 2015
11:25 AM

TAB RAMOS TODAY UNVEILED 20 of the 21 players the United States will take to the 2015 U-20 World Cup in New Zealand later this month. And yes—there were plenty of surprises on this partial roster. The team looks far different than the one that played in many of the 2014 friendly tournaments and even the squad that played in qualifying earlier this year.

The U.S. begins group play May 30 against Mynamar in Whangarei, N.Z. then faces the host Kiwis and Ukraine, both in Auckland.

And here are some insights into the selections.

Reading Would Not Release Novakovich

Andrija Novakovich was not involved with the U-20 team early in the cycle but began to get more looks after he signed with English Championship side Reading last summer. He was not involved in the World Cup qualifying tournament because Reading was reluctant to release him.

During the season he impressed at Reading—first with the U-18s and then with the U-21s after he was promoted at the beginning of January. The Wisconsin native even made two first-team appearances in the Championship at the start of the season.

According to sources, Novakovich’s exclusion from the U-20 World Cup team is due to Reading’s decision to promote the forward to the first team next season.

Under FIFA rules, clubs are not required to release players for youth national teams and Novakovich could very well play an increased role with the club’s first team next season. It is likely, from Reading’s perspective, that the coaching staff and front office want their forward to be rested.

Junior Flores is well known and liked among fans of U.S. youth national teams. He plays the No. 10 position and is signed to Borussia Dortmund. He is charismatic and enjoys playing for the United States—even to the point of turning down interest from El Salvador’s national teams.

But there were clear indications that Ramos viewed Flores as expendable. In January’s World Cup qualifying tournament, Flores only played 153 out of the team’s total 540 minutes (28% of minutes). In fact, he was never really seen by Ramos as a player who was going to lead this team’s offense.

At a recent camp in London on March 26, Ramos told me something that seemed to be directed at Flores.

“When you pick your World Cup team, you pick a starting 11 of what you think your strongest 11 players are in each position,” Ramos explained. “The rest of the group has to be full of guys who can play multiple positions. Sometimes you may leave a player, who is a great player—maybe a great No. 10—and instead you take a player who can play the No. 10, the No. 8, and the No. 6 as a secondary player. Unfortunately that has to happen.”

So in the end, it was likely Ramos’ preference to go with more versatile players which cost Flores a spot on the team.

Just to show how quickly things can change, Ramos admitted that he had never heard of Desevio Payne until after World Cup qualifying in January. Now Payne could turn out to be the team’s starting right back in New Zealand.

Payne was called into U.S. U-20 camp for the first time in March following his Eredivisie debut with Groningen. Payne was born in South Carolina but raised in the Netherlands and he hasn’t been to the United States since he was one year old.

Payne impressed during the camp in London, and in particular showcased his versatility. The Dutch-American defender is most comfortable at right back but can play left back and central defense. Payne could turn out to be very valuable because he can provide Ramos cover at multiple positions.

It was not easy for Jordan Allen to make the team for a variety of reasons. First, he had to beat out either Paul Arriola or Romain Gall, both of whom had been consistent contributors throughout the cycle. Second, and even more impressive, Allen had to overcome microfracture surgery in 2014—and full recovery from this procedure is never guaranteed.

Allen, 20, forced a call-up to an April camp in Austria after earning minutes with Real Salt Lake. Once there he impressed Ramos because he provided a wide option and demonstrated that he could pitch in at right back.

As with any World Cup team, some very difficult choices had to be made. This team was no exception and here is a list of some of the other significant cuts in addition to Novakovich and Flores.

Romain Gall: The Columbus Crew midfielder was the team’s leading scorer throughout the entire cycle and was regularly a part of every U-20 camp.

Amando Moreno: The Tijuana forward was also a leader early in the cycle. In the most recent camp in Austria, he scored a fantastic goal against Qatar in a 2-2 draw.

Cristian Roldan: In my opinion, the most difficult cut of the entire team. Ramos stressed versatility and the Seattle Sounders midfielder has the ability to play all across the midfield—including the No. 10 role. His spot was likely taken by Boca Junior’s Joel Sonora who had a strong camp in London. Roldan has impressed early in the season with Seattle but his emergence probably came a little late. He still has a very bright future within U.S. Soccer.

Lynden Gooch: The Sunderland-based Gooch was useful throughout most of the cycle given his ability to play both in the midfield and up top. He was noted for having the ability to score wonder-goals. While on the roster, Gooch was not used a lot in World Cup qualifying and his role within the team seemed to decline in 2015.

Ben Spencer: Another interesting cut given how highly Ramos spoke of Spencer early in the cycle. The six-foot-five forward is very difficult to defend at this age group and he played an enormous role in qualifying for the U.S. team following the poor start. Injuries have also plagued Spencer and have prevented him from finding a rhythm at the club level – where he is currently on loan at Toronto FC II.

Boxi Yomba: The Atletico Madrid youth product showed glimpses of his potential last year in a camp at Spain where he scored against Russia and Ireland. Ramos had problems getting Yomba released for qualifying but the Georgia native had a difficult time breaking into the team following qualifying. Going forward he will need more minutes within Atletico’s youth teams to break into future teams—such as the U-23 team.

Size is a concern

Outside of the defense, the team is small. Bradford Jamieson represents the only attacking player with decent size. To succeed, this team will have to play on the ground in quick. Poor conditions prevented the team from doing so in qualifying but the conditions in New Zealand should be much, much better. There will be no excuses and the U.S. team should be able to play the game it wants to play.

As referenced above, Tab Ramos only named 20 out of the 21 spots and that almost certainly has to do with Arsenal's Gedion Zelalem who has been waiting for FIFA approval since December when he became an American citizen.
Ramos has until May 14 to name the final roster and if Zelalem is cleared before then, he will almost certainly be on the team. If he is not, the spot will likely go to a play who has been a regular on the team for most of the cycle and can seamlessly fit in. The best guess is that it will go to Philadelphia's Zach Pfeffer if Zelalem is not cleared.

Unlike previous U-20 teams, this team is built far more on professional players. There is only one college player on the team and that is the third string keeper Jeff Caldwell. Here is a list of how the team is composed.

What do you think of this roster? Like what you see? Tell us below.