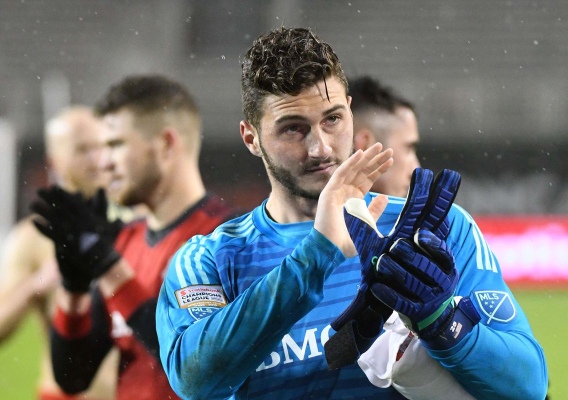 Toronto FC's run through the Champions League continued with another impressive triumph over a top Mexican opponent. On the otherhand, the Red Bulls controlled the game but were eliminated by Chivas after coming up empty at Red Bull Arena
BY Brian Sciaretta Posted
April 11, 2018
7:00 AM
MAJOR LEAGUE SOCCER got half of what it wanted last night at Toronto blitzed through Club America on a 4-2 aggregate score while the Red Bulls carried the game but couldn’t’ score and were eliminated after a scoreless draw.

What that does is set up a CONCACAF Champions League final between Toronto FC and Chivas de Guadalajara.

Toronto FC’s run has been remarkable. It the quarterfinals and the semifnals it has bounced two of Mexico’s most established clubs over two legs. That is no small feat. It has established itself as the best team in the history of MLS. But it still must get by Chivas for this run to be remembered and important.

Here are my thoughts on last night’s action

The loss will linger for the Red Bulls


There was always a good chance the Red Bulls would fail to advance against Chivas but the way in which it was eliminated will linger for a long time. Throughout the team’s history, it has struggled in two-leg knockout games but last night was the most painful.

It was painful because Chivas was entirely beatable. After a 1-0 loss in Guadalajara, the Red Bulls only needed a goal to force a shootout (provided it could keep a cleansheet). If you were told before the game that the Red Bulls would outshoot Chivas 20-1, you would like their chances.

But the Red Bulls were wasteful and should be held to a standard where it can easily push Chivas aside. It clearly has the talent to do so.

Does that fall on Jesse Marsch? A little. Marsch’s lineup, tactics, and formation created an environment that created chances and shots. He can’t do it all. All he can do is create the right environment and he did. But the decision to not start Kaku will be second guessed. While the expensive Argentine playmaker came on in the second half, the Red Bulls time to capitalize was in the first half when it went for the kill early. That is when Kaku might have made the Red Bulls just too difficult.

Liga MX might very well be the better league but the gap is extremely narrow now and there is a big overlap in talent. Chivas is not one of the better Mexican teams but the Red Bulls are one of the best in MLS.

They had the opportunity to move into a final and compete for a huge piece of silverware and came up empty. Unlike a typical playoff loss, there is no next year for this tournament. Who knows when the Red Bulls will get a chance like this again.


No Victor Vazquez, no Chris Mavinga, no Justin Morrow, no Nick Hagglund, and after the first six minutes, no Jozy Altidore.

Beating Club America over two legs is impressive for Toronto but the most impressive aspect is that the team accomplished it while fighting with one hand tied behind its back. This was not close to full-strength lineup.

Toronto deserve credit for its killer instinct. With a 3-1 advantage after the first leg, it moved in for the kill early and essentially ended the series with an early goal from Jonathan Osorio. From then, it was able to play an effective defensive game to see it out.

American fans are still bitter about the World Cup but that does not change the reality that Michael Bradley was first-rate again against Club America and is having a remarkable tournament. While Sebastian Giovinco is running the offense, Bradley is doing a lot of the dirty work in the midfield and his passing has been spot on.

Bradley’s leadership has also been important in helping get a team without many key players to help raise their game beyond the sum of their parts. This is why Toronto paid a fortune to bring Bradley in from Roma. From that team’s perspective, if it can get by Chivas it will be worth it.


So far for Toronto, one of the most important stories is how players new to this stage are playing important roles. Depending on designated players is not a winning formula for MLS teams in the Champions League.

Last night’s big goal was scored from Canadian Jonathan Osorio. Fellow countryman Ashtone Morgan scored the final goal in the first leg for an important two-goal advantage. For Canadian fans, it has been important to see their players contribute to this run.

For American fans, it wasn’t just Bradley and Altidore as other Americans have been stepping up in significant and important ways.

First, Alex Bono had the save of the tournament last night to keep the score at 1-0 in the first half. His stock is starting to take off and he should be in the mix for the U.S. national team moving forward.


This is why Bono is in the #USMNT picture. Even if he’s behind Steffen now, he’s certainly in the mix pic.twitter.com/YFUFZUiZtQ


And one of the lasting images of the tournament so far was Club America’s Oribe Peralta giving Bono a fist-bump as a sign of respect for what was truly a great save.


One more thing on Bono’s big save last night. Here’s Peralta giving him a fist-bump afterward. He knows how great it was. It’s like when Romario shook Keller’s hand at the 1998 Gold Cup right after a huge save. Respect. #torontofc #AMEvTOR pic.twitter.com/mR1r3izEGQ

Then in the 74th minute, Indiana’s Eriq Zavaleta made this recovery tackle to stop a Club America counter attack. The degree of difficulty was very high given the fatigue that sets in while playing in the second half at Azteca in high altitude.


This was a crucial tackle by Eriq Zavaleta as #ClubAmerica hit on the counter. Ibarguen cut inside and was going straight for goal, but Zavaleta stopped him. So many great defensive plays by #TFC tonight. #TFCLive #AMEvTOR #CCL #SCCL2018 #CCLFever ???? pic.twitter.com/CikvLUeZ5k

On top of that, Marky Delgado has answered all questions about why he is in the U.S. national team picture right now. He has had a great year where he has earned a starting spot on a very good Toronto team. While it will probably be tough for him to start for the national team when everyone is healthy, he looks like a very serviceable option should a player like Weston McKennie or Tyler Adams be forced out of action with an injury.

Between designated players, locally produced players, depth players ready to step-up, and a coach who can get the most out of his players, the bottom line is that it was a total team effort and really showed the layers of contribution it takes to win at this level.