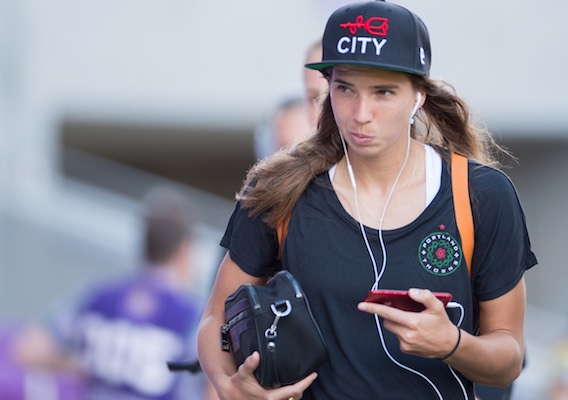 Tobin Heath to ASN: "I Am Heartbroken for the Men"

Tobin Heath and Meghan Klingenberg, both starters on the 2015 U.S. women's team that won the World Cup, spoke about the disappointment they felt after the men's team faltered in Trinidad.
BY John D. Halloran Posted
October 16, 2017
9:00 AM

While the women’s team has won the World Cup three times and never finished lower than third, the men’s team failed to even qualify for the 2018 World Cup and haven’t advanced past the round of 16 in more than 15 years.

There are differences, of course, between the two sides of the sport that account for some of this massive gap in achievement, but for players brought up in the same country, in the same culture, and in similar youth systems, it’s difficult to understand why one team dominates and the other flails.

American Soccer Now spoke to Tobin Heath and Meghan Klingenberg—who both started for the U.S. women as they won a World Cup title in 2015—to get their thoughts on the men’s failure and what needs to change within U.S. Soccer.

“I’m heartbroken for the men,” said Heath. “I cried after that game. I feel like it was a terrible day—not just for them. It’s sad and I feel like you can place blame, but at the end of the day it stinks for all of us that we won’t be in the World Cup.

“I know everybody will be up in arms about every little thing, as they should be. We should be doing that even if we did qualify. We should always be reassessing if we’re doing the right things, if we’re on the right path. And that’s both on the men’s and women’s side. If we want to be a contender on the men’s side for a World Cup, we have to do some serious looking at ourselves and maybe that is the moment for this.”

Heath explained that while the men’s and women’s development systems are different—with men increasingly skipping the college game and heading straight to the pro ranks—that even the women’s side is adapting its approach to remain competitive. She also saw the men’s failure as a bit of a bad luck.

“I think [it’s] the same on the women’s side,” noted Heath. “The game keeps continuing to evolve and we have to evolve with it. In that way, it’s kind of a wakeup call and a great opportunity for us to dive in and figure out new ways to grow and to change.

“It’s just unfortunate. I feel like in the same sense we could have easily qualified [against Trinidad and Tobago] and everybody maybe would be feeling different if that ball hadn’t gone off the post. Football is football—it’s brutal sometimes.”

On the women’s side, U.S. Soccer recently began an academy system, similar to the system started on the men’s side in 2007. Some women’s players have also begun to skip the college ranks like their male counterparts, as U.S. internationals Lindsey Horan and Mallory Pugh have done in recent years.

Heath also defended U.S. Soccer president Sunil Gulati, who has indicated that he does not plan to resign in the face of the men’s failure.

“Sunil Gulati has been a big advocate for women’s soccer—that’s why we are a prominent team in the world,” she argued. “I don’t think we should dance around that in any way. We’ve been given a lot, from the very beginning. We have fought for a lot, but we have been on the more advanced side [in terms of] what we’ve been given.”

“Collectively, we have to do this together and it’s the only way we can do it,” Heath added. “When we reevaluate things, it isn’t about one person or another person. It’s about what’s best for the future of soccer in this country.”

Klingenberg, for her part, argued that much of the problem stems around player identification, something she saw often during her time in the youth ranks.

“And that’s a real shame because I know kids, I know a bunch of kids, who were really incredible when they’re younger and were never seen, never got to another level. If they would have had the right environment, the right coach, the right exposure, maybe they would be playing professionally.”

The defender believes she overcame such obstacles through a combination of determination, hard work, and luck.

“I practiced non-stop,” said Klingenberg. “I would break so many things in the house and around the house and lights outside that my parents eventually built a soccer room in the basement so I wouldn’t break anything. I literally would have a ball at my foot all the time. I think that really was a difference.”

“I begged my parents for [more coaching]. I tried really hard and I got seen by the right people and they believed in me and I got kind of lucky.”

The U.S. women resume preparation for their own World Cup qualifying campaign next year with a pair of friendlies this week on October 19 (8pm ET, FS1) and October 22 (2pm ET, ESPN) against South Korea.