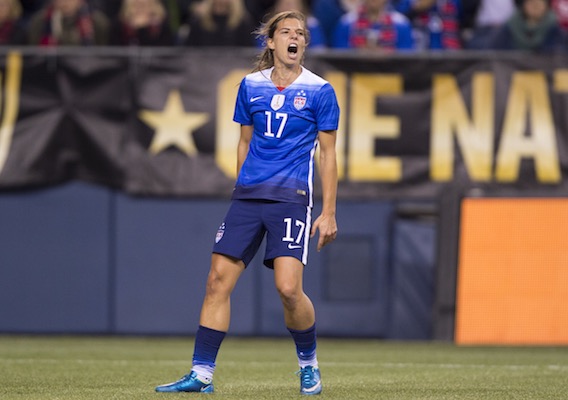 The 27-year-old midfielder now has more than 100 caps to her name and will be asked to provide leadership as the U.S. women retool and prepare for the 2016 Olympics in Rio.
BY John D. Halloran Posted
December 08, 2015
3:00 PM

WHEN TOBIN HEATH first emerged with the United States women's national team in 2008, she did so as part of a trio of talented youngsters that also included Lauren Holiday and Amy Rodriguez.

Dubbed "The New Kids," the three college-aged players were fighting for spots on the Olympic team that would compete in Beijing that year. Not only did they make that team, but over the next two World Cup cycles the group would become mainstays for the U.S.—with Heath patrolling the wing, Rodriguez poaching goals up top, and Holiday playing nearly every position in the U.S. midfield and attack.

However, as the Americans approach this month's friendlies against Trinidad and Tobago (9pm ET, ESPN2)and China and make their final preparations for Olympic qualifying in February, times are changing for both the group and the U.S. squad. The three are no longer newbies. Holiday and Rodriguez are both married, and Rodriguez has a son. Holiday, the most experienced of the three, retired last month and has left the game completely.

Heath, the youngest of the three, is now 27. Having recently earned her 100th cap, and with the recent retirements of four World Cup veterans, she now finds herself in an unusual position as one of the team's most experienced veterans.

Heath, known as one of the more free-spirited players on the U.S. squad, hasn't seen the transformation as jarring, but rather part of a natural evolution.

"I feel very fortunate for the players that came before me, taught me, and brought me under their wing," Heath told American Soccer Now. "That transition to becoming an older player is kind of seamless—you do it naturally in a way. It's something I enjoy. I love encouraging the younger kids and want to bring out the best in them because that's the future of this team.

With the retirements of Holiday, Shannon Boxx, Lori Chalupny, and Abby Wambach, head coach Jill Ellis has begun the process of retooling the U.S. lineup ahead of this summer's Olympics. Over the last two camps, the coach has called in 10 players who were not part of the team's World Cup run. Heath thinks the fresh faces have invigorated the team's training sessions.

"I think it's fantastic to have new players in camp and to kind of shake things up. They're obviously extremely eager to play and to prove themselves and that brings a different level and a different energy into the practice sessions," said Heath. "Our team's going through a bit of a transition with players retiring and new players coming in. There are growing pains that every team has to go through. It's kind of an exciting time for us as well because we have the Olympics coming up this summer."

One of the biggest questions the U.S. faces ahead of the Olympics is who will replace Holiday in the midfield. Paired with Morgan Brian and Carli Lloyd in a 4-2-3-1, Holiday’s presence was vital to the U.S.'s success in Canada this past summer.

Since the World Cup, Heath has occasionally been used by Ellis in Holiday's former holding role, but Heath freely admits the lack of freedom as a holding midfielder is not ideal for her style of play. She also revealed that a switch in position is not something she and Ellis have discussed at length.

"We've not really spoken that much about it," the New Jersey native said. "Right now there's just a lot of moving parts and for a lot of these games we're just—I wouldn't say just kind of showing up and playing—but we're using this as an evaluation time and a celebration of the World Cup.

"I think there are definitely intentional things going on, but also a lot of different moving parts. For me, I don't really mind wherever I end up on the field, but [playing holding mid] hasn't been discussed all that much."

Still, Heath thinks the U.S. has plenty of options for the position and believes that one of the U.S.'s new call-ups could potentially win the job ahead of the Olympics.

"There's definitely a bunch of young players that are very capable that we've seen in the NWSL that have done a good job," Heath said. "I think there are new players that definitely have an opportunity and we don't have a lot of time to work players in. I think it's exciting for the new players to prove themselves in a certain way."

Assuming she stays in a more advanced role, Heath offers the U.S. an attacking flair and creative presence that few other players can offer. Over the years, she has become a fan favorite for her elasticos, back heels, and nutmegs. That creativity and freedom of play is something Heath believes the American system needs to do a better job developing.

"I've been very fortunate in my player development and that's one of the reasons I'm passionate about less structure in [our youth system] and allowing players more freedom," Heath said. "As Americans, in our athletic culture, we're so focused on results that we miss out on player development—which is critical. I am passionate about that and the process. The process could be different to encourage [creativity and flair].”

Heath also credited her coaches for allowing her the freedom to develop that flair early in her career.

"I was encouraged to be myself, to try things, to make mistakes," Heath explained. "I felt that freedom at a young age, that my coaches believed in me, saw something different, and didn't try to turn me into a 'normal' player. [They] allowed me to figure out the things I was good at, and wanted to be good at. That freedom and encouragement really helped me."

However, the midfielder was also quick to point out one major advantage of the American system.

"But there is something about the American way that you can't teach that other countries would love to learn—and that's the will to win," added Heath. "And you saw that in the World Cup. Every time we get into camp it's incredible. Once we step on the field, it's a whole other level out there."

Another environment that Heath sees as important for the development of the sport and the national team is the domestic league, the NWSL. The league is heading into its fourth year but Heath emphasized the need to continue improving women's professional soccer in America.

"I want the league to continue to support us and be a home for us—a place that we can go back to, and develop, and be challenged, and then we feel great when we come back in with the national team," said Heath. "It's fantastic that we're going into our fourth season. That speaks volumes to the league and where we're going. I think no one is really satisfied with where we are.

Like the U.S., Heath's club team, the Portland Thorns, has been a squad in transition. After winning the NWSL in the league's inaugural season back in 2013, it was knocked out in the semifinals in 2014 and failed to make the playoffs in 2015.

Now, with a new head coach in Mark Parsons and a revamped lineup, Heath is ready for a new chapter in Portland.

"I'm very excited. Mark is super-eager and excited to be in Portland," said Heath. "Obviously, our team has changed a lot and forming the team is something we've been trying to do to the best of our ability in this offseason. In that way, everybody just wants to get started. The offseason feels super-long and I know Portland, the city, and the fans expect a lot and the players want to deliver.

"We just want to get started."

Looking ahead to the Rio Olympics, Heath said the national team understands its preparation is a progression and that there will be bumps along the way. She referenced the struggles the Americans had last December when it traveled down to Brazil for a series of pre-World Cup friendlies and only managed a 1-1-2 record.

"We spoke a little bit before this camp started about where we were last year at this time leading into the World Cup," she said. "As a team, we struggled during that time [at the International Tournament of Brasilia] and we spoke about that. It was a process. And that's how we look at it leading up to the Olympics. It's a process."

But Heath also emphasized that the team will be ready to get to work when they meet in January to prepare for February's Olympic qualifying tournament.

"We don't expect to be where we want to be leading into [the Olympics]. We want to know we're reinforcing the things we want to be good at," said Heath. "In that way, I think we're all on the same page as to what we want to accomplish in this time here in December.

"And then, in January, that's when things begin to get very serious."