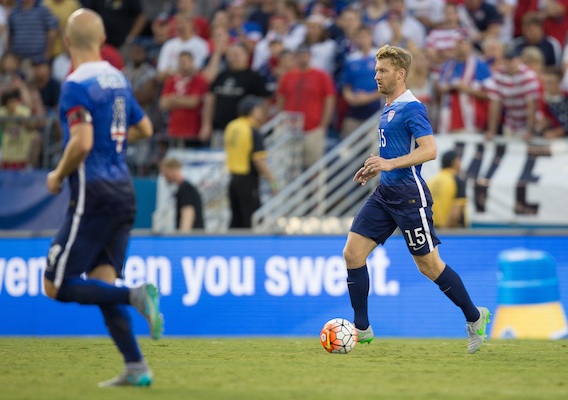 Tim Ream Hopes to Cement His Place on U.S. Squad

The former New York Red Bulls defender has made himself indispensable for Bolton Wanderers in the English Championship. Now he wans to do the same for the United States men's national team.
BY Brian Sciaretta Posted
July 06, 2015
11:00 AM

WHEN JURGEN KLINSMANN announced his roster for the 2015 Gold Cup, he clearly placed a high value on U.S. national team experience as the squad consisted primarily of players from the 2014 World Cup team.

Tim Ream, however, was an exception. He missed out Brazil—he didn't even make the preliminary 30-man roster—but he is building a strong case to be part of the team’s future.

Since earning his first cap in 2010, Ream, 27, has been in and out of the national team, earning just 12 caps since his debut. Under Klinsmann’s tenure as head coach, Ream has shown signs of breaking through into the team's core group but there was also a two-year stretch from 2012-2014 when he didn’t play a single international match.

Ream isn't exactly entrenched in the squad these days. Called in for the March friendlies, Ream came on in the 89th minute against Switzerland and didn't play at all against Denmark. He was also a late add in the lopsided 4-1 loss to Ireland in November.

He did not take part in the recent U.S. wins over the Netherlands and Germany in part so he could recover from a long season in the English Championship, where teams play 46 league matches per season.

While away he has followed the team closely and is pleased with the direction.

“There’s definitely a progression that’s happened,” Ream said. “There was kind of that lull that happened after the World Cup with giving up late leads and struggling to close out games. But I think the big thing is that if you look from those first few games to the winning results at most recent games against Holland and Germany, the way the team has been playing, I think it’s pretty clear to see that we’re heading in the right direction.

"We’re starting to do things that Jurgen is asking us to do, and it’s paying off in big games.”

So how did Ream make the Gold Cup roster while only seeing limited minutes for the team over the past few months? The answer appears to be very simple. Ream has been playing very well for Bolton Wanders and his versatility along the backline gives Klinsmann cover at several positions. While he prefers to play central defense, Ream has spent a lot of time playing left back for Bolton.

And yes, the St. Louis native knows that left back has ben a troublesome position for the United States over the years.

“During the [March] friendlies, I had a few conversations with Jurgen and he mentioned I was going to be in the plans for the Gold Cup,” Ream told American Soccer Now. “I had my first taste two Gold Cups ago in 2011. I’m excited to be back in there and I’m excited to be part of a strong squad for this tournament.”

In May, Ream earned a rare honor for an American at an English club when he was named Bolton’s player of the year for a second straight season—both by the fans and the club. The club struggled to score goals, finishing in 18th place in the 24-team league. Despite a poor record, Ream has played well and is a key part of the team’s oft-stated desire to return to the Premier League.

Ream acknowledges that the individual awards have helped boost his confidence boost and that “it does justify what I’ve done" in terms of playing abroad. He is also quick to add that “individual awards don’t mean much” because it is a team game.

And Bolton is a team that relies heavily on its American defender.

“They’re working hard behind the scenes to bring goal scorers in and players who want to be there and want to do well and ultimately want to get promoted,” Ream said of Bolton. “I can’t sit here and say this is what we’re doing and we’re going to get promoted because it’s just too hard to predict. You can’t say yes we’re going to do it this year or no. You can’t say you’re not going to go for it because that’s the goal every year.

"It really is a tough league to move guys in and out. That’s just the nature of the league. Not many guys are buying and not many teams can sell and you can’t sell to teams that aren’t buying.  I wouldn’t necessarily say you are stuck but you have to work with what you have.”

The Gold Cup will also be an interesting test in the relationship between Bolton and the United States national team. Bolton manager Neil Lennon has been very public about Ream being called up to U.S. matches only to receive minimal playing time.

"They call him in on the night before the game so he has to get a flight on Tuesday morning to Dublin and then play one minute of an international," Lennon told the Bolton News in November. "I want an explanation. They had two games and they should have called him in after that initial game. People wonder why footballers don't want to play for their country any more. I'm not saying that is the case with Tim, but when you see them being treated like that it makes me very angry."

In April, Lennon made similar comments: “If he's only going to play a minute of football, we'd much rather have him here where he can have some rest and train for a week with his club in preparation for what is an important two games this weekend."

Ream is that glad that the awkward situation is now in the past but as an important player for his club he also recognizes that this is the nature of the business.

“It did put me in a little bit of an awkward situation—more so with the club than anything because they obviously want me to be healthy and play as many games as possible with the club,” Ream said. “In their eyes, they’re looking out for their player. That’s the way that they are. I had a conversation with Jurgen and we exchanged a few emails about it. There’s no bad blood or bad feelings at all from any party.

"It was one of those things where you had a situation but in a few days' time you let it blow over and you move on.”

For what it's worth, Ream played 45 minutes against Guatemala on Friday night.