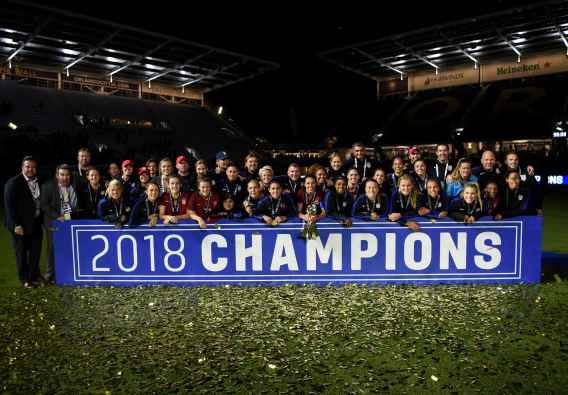 Three thoughts on the USWNT's win over England

The United States Women's national team downed England 1-0 in Orlando to win the 2018 SheBelieves Cup. After disappointing 2017 tournament, this year's team was boosted by a young defense that was strong through the three games. ASN's John Halloran breaks down the win.
BY John Halloran Posted
March 08, 2018
1:10 AM
THE UNITED STATES WOMEN'S NATIONAL TEAM wrapped up the 2018 SheBelieves Cup on Wednesday night, beating England 1-0 in Orlando.

The lone goal in the contest came courtesy of an England own goal when a Megan Rapinoe cross bounced off two Lioness defenders before ending up in the net.


In last year’s SheBelieves Cup, the Americans finished in fourth place, dead last in the four-team tournament. This year, they finished atop the standings after wins over Germany and England and a draw against France.

From the outset, the competition this year proved to be an uneven affair when England pasted France 4-1 in the opening match. It finished the same way, with France racking up a 3-0 win over Germany on the tournament’s final day.

Throughout, the U.S. proved to be the most consistent—if, at times, uninspiring—team. They began with a 1-0 win over the second-ranked Germans, tied the sixth-ranked French 1-1, and outlasted the third-ranked English.

Despite some shaky midfield play, an offense that lacked punch, and a number of defending gaffes, the American women did what they do best—win.

ERTZ’ VALUE PROVEN IN HER ABSENCE

Since Julie Ertz came on for the U.S. at halftime against Brazil in last summer’s Tournament of Nations, the American team has simply been better. After months of struggling early in 2017, the U.S. offense exploded and the team went on to beat Brazil, Japan, Canada, and Denmark as part of their current 12-game unbeaten streak.

However, in the 2018 SheBelieves Cup, Ertz only made one appearance. She pushed through a minor injury to play in the team’s opening win against Germany, but that proved to be her only action. Once she left the starting lineup, the team’s performances dropped dramatically.

Against France, head coach Jill Ellis tried Andi Sullivan in Ertz’ No. 6 position, but Sullivan lost the ball repeatedly and dropped so deep that it caused the U.S. to lose numbers in the midfield.

On Wednesday night, Ellis tried Allie Long, who did the exact opposite, staying so high that the backline couldn’t work the ball out through the midfield and instead resorted to longer passes up the flank and across the field.

Throughout the tournament, the U.S. midfield struggled and Ertz’ absence simply amplified the problems. Long and Carli Lloyd struggled to make sustained impacts and Lindsey Horan, despite some nice line-breaking passes, had a series of up-and-down performances during the tournament. Against England, none of the American midfielders supported transition out of the back, they provided little support to the wingers in the attacking third, and rarely pressured England’s midfield when the Lionesses held possession.

Of course, the team was missing Sam Mewis through injury and a healthy Rose Lavelle could also be a difference-maker in the middle for the U.S.. Still, the fact remains that Ertz is the lynchpin that holds the whole thing together.


Tierna Davidson entered this year’s tournament with one cap and Abby Dahlkemper, the experienced one in the center-back pairing, had 14. Together, they managed to shut out two of the best teams in the world and hold the explosive French offensive to a single goal.

To be sure, there were mistakes from the duo. Despite playing strong through the majority of the tournament, Dahlkemper switched off three times during the France game, one of which cost the Americans a goal and another that saw a French shot go off the crossbar.

Davidson also got herself into trouble in the opening minutes against England, but otherwise played 270 minutes of nearly perfect defense. Her clearances were strong, her positioning superb, and her possession excellent.

Ellis showed a tremendous amount of faith in the 19-year-old and Davidson repaid that faith with a series of performances worthy of a 30-year-old veteran.

Similar to the 2015 Algarve Cup, when Julie Ertz (then Johnston) took advantages of injuries at center back to win a starting role ahead of that summer’s World Cup, Davidson might be creating selection headaches for Ellis ahead of next summer’s competition. When Becky Sauerbrunn returns from injury, the U.S. will have three center backs for two positions.