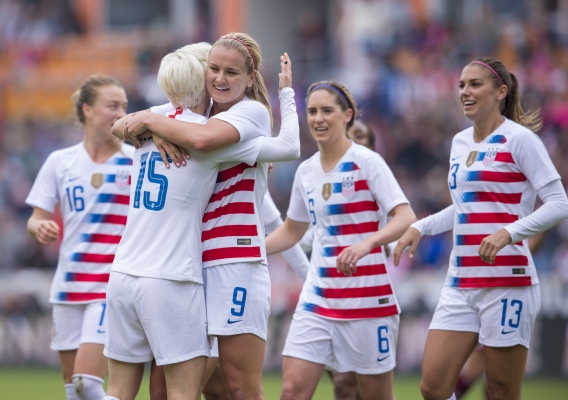 Three thoughts on the USWNT's rout over El Tri

The United States women's national team completed a sweep over Mexico in its two April friendlies by defeating El Tri 6-2 on Sunday in Houston. ASN's John Halloran is here with his analysis.
BY John Halloran Posted
April 09, 2018
9:05 AM
THE UNITED STATES women’s national team defeated Mexico in the second of two April friendlies on Sunday afternoon, downing El Tri 6-2 in front of 15,349 fans in Houston.

Mallory Pugh opened the scoring for the Yanks in only the third minute of play, but Mexico found their way back quickly, scoring on set pieces in the 17th and 24th minutes to shock the Americans and take back the lead.

The U.S. responded well, however, with Lindsey Horan scoring on a corner herself only a minute after the Mexicans picked up their second. From there, Carli Lloyd added a tap-in—which marked her 100th goal for the Red, White, and Blue, and Alex Morgan added another to make it 4-2 at the half.

In the second stanza, Megan Rapinoe scored from distance and Morgan added another to create the final scoreline.


Following a strong performance in the first match on Thursday night, the U.S. picked up right where it left off, dismantling Mexico’s defense in every way imaginable.

Megan Rapinoe put in a star performance on the day, making key contributions on all six goals. In total, she finished the afternoon with one goal and an amazing four assists.

Have a day, Pinoe! She adds a goal to her 3 assists to add to the USWNT's lead. 5-2! pic.twitter.com/NiluLK2rEF

Since recovering from her third ACL tear, which happened at the end of 2015 and kept her beneath top form in 2016, Rapinoe has simply exploded over the past year and a half. She has been a key reason the team has found success in the 4-3-3 and, playing higher up the field, has helped the U.S. offense look as good as any time in recent memory.

On Sunday, Rapinoe slipped a beautiful pass in behind Mexico’s backline to Pugh for the opener, delivered the service on Morgan and Horan’s corner kick goals, fed the original cross on Lloyd’s tap-in, slotted the ball across to Morgan on another goal, and scored herself. It was a masterful performance, to say the least.


Following Alyssa Naeher’s poor performance on Thursday, head coach Jill Ellis elected to give Jane Campbell the start in Houston, although the broadcast team on Sunday said that Ellis had planned the switch even before Thursday’s game.

The move seemed to be the smart play, as Campbell has played well in recent weeks in the National Women’s Soccer League and the U.S. needs to look at different options in the net.

Campbell, however, disappointed in her third cap for the U.S.

On Mexico’s first goal, the 23-year-old inexplicably wandered into her own net while defending a corner kick. While Mexico did put Ariana Calderon on Campbell on the play, there was no foul or obstruction and Campbell made no effort at all to fight through Calderon to win the ball.


Ocampo Olimpico! Monica Ocampo's corner gets past everybody and in for Mexico's equalizer. pic.twitter.com/j49DCfr9PQ

Then, just seven minutes later, Campbell again failed to properly defend a corner. This time, she flailed at the service, completely missing the ball that fell to Kiana Palacios for an open header.

At this point in the cycle, barely a year ahead of the 2019 World Cup, the U.S. has a real dilemma on its hands. Naeher has looked shaky on numerous occasions over the past year and Campbell does not look ready at all. There is a deep pool at the position, including long-time back-up Ashlyn Harris, and players like Adrianna Franch and Abby Smith, who have both earned call-ups over the past year.

Since the 2016 Olympics, Ellis put all of her eggs in Naeher’s basket. The coach will have to scramble now to find the right fit before the team moves into World Cup qualifying this fall.

In addition to Campbell’s mistakes on Mexico’s corner kick goals, the U.S. did a poor job defending set pieces in both friendlies.

On Thursday, a ball came completely across the face of the U.S. net, with Naeher, Crystal Dunn, and Tierna Davidson all misjudging its flight. On Sunday, the mistake repeated itself on Mexico’s first goal, with Campbell drifting into her own net and Dunn completely whiffing on her attempted clearance.


On Mexico’s second goal on Sunday, despite the fact that Campbell should have gotten a hand to the ball, the U.S. still had an unmarked runner in the box.

Palacios drifted in between Morgan Brian and Becky Sauerbrunn on the play, getting the free header. Both Brian and Sauerbrunn are experienced enough to know better.

Lately, Ellis has also set the U.S. up on corner kicks without any post players. There are multiple theoretical arguments in favor in such a tactic, but all of those go out the window when balls end up in the back of the net. On both of Mexico’s goals on Sunday, it’s not unreasonable to think a player positioned on the post from the beginning of the play could have made a difference.

Anyone around the game for any length of time has seen dozens of occasions where post players have saved goals, a far more valuable fact than having an extra marker or gaining a possible offside call by lining up without players on the posts.