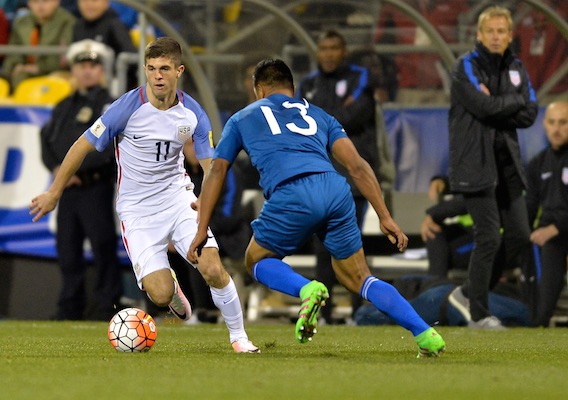 Three Thoughts on the U.S. Victory Over Guatemala

Clint Dempsey broke the ice in the 12th minute, Geoff Cameron doubled the lead, and the United States went on to beat Guatemala 4-0 in Columbus, Ohio. Here's Brian's take on the game.
BY Brian Sciaretta Posted
March 29, 2016
11:50 PM

COLUMBUS, OHIO—In a game that the United States absolutely had to win for both confidence and, more importantly, its World Cup life, it came away with a convincing 4-0 win over a very bad Guatemala team.

The veterans—the over-30 crowd—including Kyle Beckerman, Geoff Cameron, and Clint Demspey (and soon-to-be member, Graham Zusi, 29) stepped up. The calming veteran influence proved important in a game where there was significant questions about the squad's confidence.

Beckerman played deep and did what he does best: win the ball, make defensive stops, and maintain possession by completing a huge percentage of his passes. There are legitimate concerns about his age but Beckerman can still play that very deep midfield role as well as anybody in the U.S. player pool.

“We needed a big reaction and I think everybody had that same reaction of being aggressive, high intensity, getting the ball moving fast,” Beckerman said after the game. “I think that aggression kind of led to everything good that happened to us.”

Dempsey, meanwhile, came into the game with questions surrounding his international future. Instead, he authoritatively slammed in the first goal, assisted on the last, and gave the U.S. three points it needed.

Cameron was the best player in the game. Moved out of right back and into his preferred central defense role, he was terrific. His perfectly weighted pass out of the midfield set up the first goal and then he headed home the second goal on a set piece to all but secure the victory.

Klinsmann, however, nsisted that these veterans are needed just as much off the field as they are on the field.

“Every team needs leadership from its veteran players,” Klinsmann said. “Clint [Dempsey], Michael [Bradley], and Kyle Beckerman—the way he kind of cleaned everything up there. It was tremendous. Geoff Cameron grows more and more into the leader role and that is good to see. Then you build a bridge to the younger generation—they need their help. They need their guidance.”

Klinsmann singled out Cameron for his leadership. It's something that the Massachusetts native embraces—especially when he sees the younger players like Christian Pulisic coming through.

“I'm trying to stay positive and encourage people with my experiences in England,” Cameron said. “I've been through the process of World Cup qualifying before when I was a young kid. Carlos Bocanegra and Steve Cherundolo and all those guys were there to help me gain experience and give me some exposure. Any way I can do that to help these guys, [I will] because it's a long road and you never know what is going to happen.

"If you can get guys experience and feeling comfortable in big games like these, it's fantastic.”

Klinsmann made several key adjustment from the loss against Guatemala on Friday. Yedlin moved to right back, where he plays for Sunderland; Cameron moved to central defense; and Zusi came in at right midfield.

To be fair, however, the coach had to deal with a lot of injuries.

“Every coach's wish is to be consistent with his players being available, having every player at their disposal,” Klinsmann said. “Unfortunately that is not reality. The reality is that we lost Matt Besler, John Brooks, and Fabian Johnson [with injuries].

"The reality is that tonight Alejandro Bedoya could not make it. So for us, reality is with the group of players we have, we have to work things out. I think we're doing a very decent job at that.”

The key will be finding a combination of players that works when everyone, or neaarly everyone, is healthy. Yedlin and Castillo proved that they can be given spots on the backline. Castillo has struggled for years to break into the team while Yedlin has been used out of position on the right wing. Against an opponent like Guatemala, they did not prove that they are starters for the U.S. but they are still in the mix.

If they can prove themselves, it would be huge. Yedlin at right back would turn the page on players like Brad Evans and Timmy Chandler. If Edgar Castillo can seize the left back position, it would allow Fabian Johnson to move into the midfield—where he belongs.

While some people were hoping for Borussia Dortmund teenager Christian Pulisic to make an appearance to be cap-tied, the truth is that he had no interest in playing for Croatia. He was always about playing for the United States.

“[The veterans] took me in right away,” Pulisic said. “To get on the field—it's obviously been a dream of mine to play for the U.S. national team. So it finally came true and I am very thankful. I just wanted the team to win, no matter what.”

Klinsmann was very excited with what he saw from Pulisic.

“We prepared Christian just to do it the way he does with his club team: don't overthink,” Klinsmann stressed. “As a young player, you tend to get very nervous and over-excited and you over-think some situations. But he was very calm and very balanced.

“I think in his couple of minutes you saw already his talent that he has."

For many of the team’s veterans, it was their first time meeting the Hershey, Pa., native.

“I thought he was great,” Beckerman said. "I thought he was really comfortable, especially for a 17-year-old. He's pretty impressive and seems like he's got a really great head on his shoulders. He's in a great place to keep learning. The future is bright for him.”

Cameron echoed Beckerman but jokingly cautioned the media on the hype level.

“He's got some fantastic skill,” Cameron said. “He's a guy that will be a big player for us eventually. He's a young kid, so you guys [in the media] don't over-blow him up or anything. Just let him do what he does and he'll be a great talent for us."