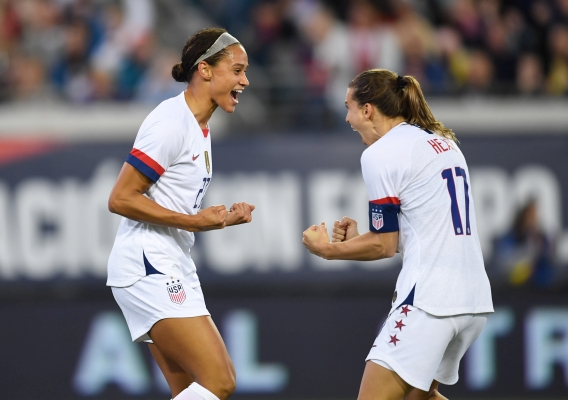 The USWNT continued to look sharp under new manager Vlatko Andonovski with a convincing 6-0 win over Costa Rica in Florida to conclude it's histoic year. ASN's John Halloran chimes in with his thoughts on the game
BY John Halloran Posted
November 10, 2019
5:00 PM
IN ITS last match of 2019, the United States women’s national team defeated Costa Rica 6-0 in front of 12,914 fans in Jacksonville, Florida. The win extended the American unbeaten streak to 23 games and came on the back of goals from Carli Lloyd, Morgan Brian, Christen Press, and Lynn Williams.


Vlatko Andonovski picked up his second win as the head coach of the U.S. on Sunday and continued to put his stamp on the squad. As on Thursday night against Sweden, the Americans often dropped into a 4-1-4-1 when not in possession and made it very difficult for the 38th-ranked Costa Ricans to find a way through the U.S.’ lines.

The one difference on Sunday, however, was that Andonovski seemed to have the U.S. pressing higher than they did against Sweden and trying to force Costa Rica into mistakes when they tried to build out of the back.

The coach also gave out two debuts on Sunday, capping dual international Alana Cook—who recently received a call-up for England—and Midge Purce. The duo played on the right side of the American defense against Costa Rica, each playing 90 minutes, and helping lead the U.S. to a shutout.


Just as they did against Sweden on Thursday, the U.S. got off to a quick start against Costa Rica. In just the fourth minute of play, Rose Lavelle picked up a loose ball inside of her own half, beat a defender to the inside, and then set Lloyd in behind with a beautiful through ball. Lloyd fired home to give the Americans the early lead.

Then, only six minutes later, Lavelle was at it again, this time picking up a ball outside the 18, beating a defender, and laying Brian in for the chance and another goal.

On the night, Lavelle was again sublime, repeatedly breaking lines and setting the American attack. Press then put the game away early in the second half before Williams added two more and Costa Rica notched an own goal to round out the final scoreline.


In January, the United States traveled to France, fielded an understrength lineup, and lost 3-1 to the French. Many decided right then and there that all hope was lost, the world had caught up, and there was no chance the Americans would be able to repeat as world champions.

The fact of the matter is that there’s not a team in the world that can consistently compete with the U.S. and the Americans head into 2020 as the odds-on favorite to keep their place atop the world of women’s soccer.

The biggest obstacle next year will be a simple, yet unavoidable one—fatigue. Every player on the U.S. roster will tell you that they are tired and that spending nearly two months abroad before and during the World Cup, followed by the completion of their NWSL seasons, and then fitting in the Victory Tour this fall proved a killer combination.

Most of the regulars will get the next six weeks off (although the team will hold an ID camp in December) and then reconvene in January to prepare for Olympic qualifying. Perhaps that, and the energy of a new coach, will be enough to help lead the team to glory in Tokyo. But the 2016 Olympics proved that the World Cup-Olympic double remains a brutal slog for even the most talented of teams.