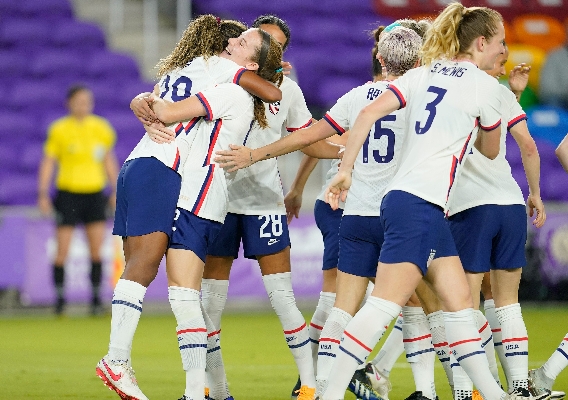 The USWNT easily dispatched Colombia on Friday by a 6-0 scoreline on Friday night. The second game of a two-game set between the two teams saw many of the American players showcase themselves well ahead of next month's SheBelieves Cup. ASN's John Halloran chimes in with his three thoughts on the team's performance.
BY John Halloran Posted
January 22, 2021
11:00 AM

THE UNITED STATES women’s national team beat Colombia 6-0 on Friday night in Orlando, wrapping up a two-game set against the South American side following a 4-0 win on Monday.

In Friday’s match, head coach Vlatko Andonovski made seven changes to the Americans’ starting lineup from Monday’s game—switching his goalkeeper, the entire backline, and one player each in the midfield and front line.

By halftime, the U.S. had already earned a 3-0 lead on a goal from Catarina Macario and two from Megan Rapinoe. After the break, they added three more via strikes from Lynn Williams, Lindsey Horan, and Midge Purce.

The Brazilian-born Macario earned her first cap on Monday against Colombia as a substitute and picked up her first start for the Americans on Friday, with both appearances coming immediately after FIFA finally granted her clearance to play for the U.S. 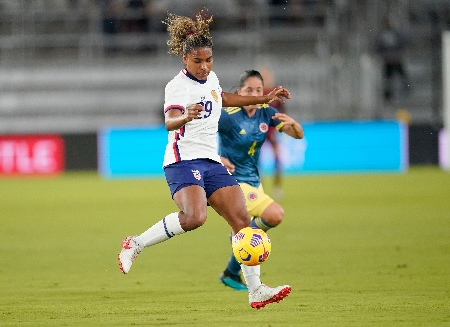 It’s been a busy month for the attacker, as earlier this month, she also announced that she was leaving Stanford early and signed with French side Olympique Lyon.

And on Friday, it only took Macario two minutes and 32 seconds to make her impact felt, as she latched onto an Ali Krieger service to open the scoring.

3 minutes into her 2nd cap and in her 1st career start, @catarinamacario scores her 1st ???????? goal. pic.twitter.com/2pBvdrT0WD

In the 35th minute, Macario also played a role in the U.S.’ second tally, as she combined with Rose Lavelle near the sideline to help produce the service that led to Rapinoe’s first goal of the night.

Thus far, both of Macario’s appearances have come in the front line. Part of that might be due to the number of absences and injuries in the American forward pool during this camp, but if Andonovski truly sees his new acquisition as a striker and not a midfielder, it will only add to an already intense battle for Olympic roster spots at the position.

Sam Mewis surprised more than a few observers in the 2019 World Cup when she made a late run to displace Lindsey Horan in the starting XI. Since then, Mewis’ form has continued to impress for both club and country. 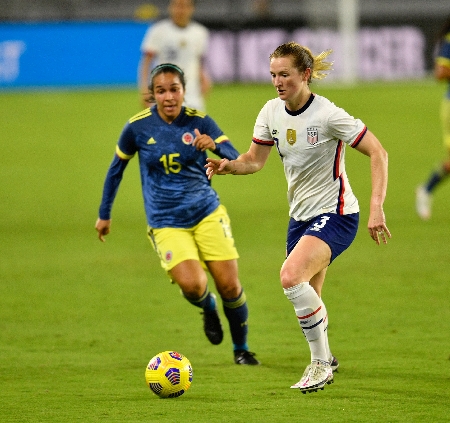 In the first match against Colombia on Monday, Mewis notched a hat trick and on Friday tortured them again with a series of excellent passes and strong runs through the midfield. In the second game, she also earned the penalty that resulted in the U.S.’ third goal and then assisted on the fourth.

Fast start in Florida! @mPinoe back to her tricks, @sammymewy finding the back of the net! ???? pic.twitter.com/llw4xZO8M1

Later in the match, Mewis did roll her ankle and was forced out of the game, but she walked off under her own power.

Colombia brought a young, largely inexperienced roster to Orlando for this set of matches, and the Americans dispatched them without a struggle in both contests. And considering the sheer challenge of hosting games right now, any competition is better than no competition. 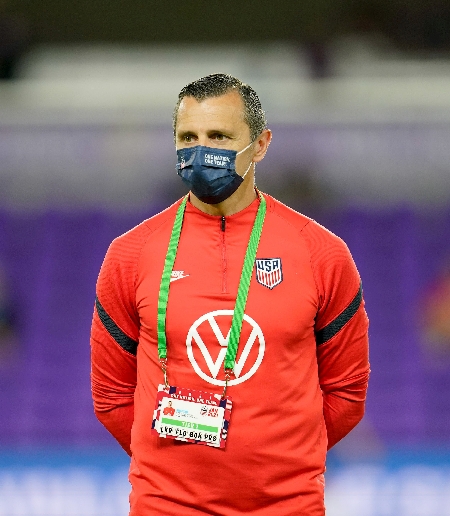 Still, among Andonovski’s tough choices in the months ahead are who he will want to bring to Tokyo as his reserves in the back line. On Friday, he completely rotated his defense and gave starts to Tierna Davidson, Alana Cook, Ali Krieger, and Emily Sonnett.

But, with an 18-player roster for the Olympics and the usual starting lineup of Becky Sauerbrunn, Abby Dahlkemper, Kelley O’Hara, and Crystal Dunn virtual locks, the coach will need to see his backups tested against a higher level of opponent to truly get an idea of who deserves the last two defensive spots on the team.