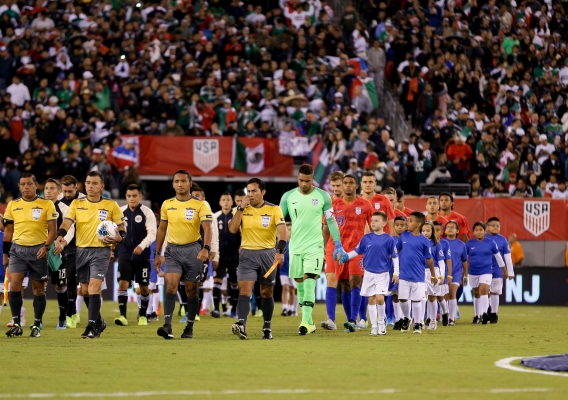 The USMNT lost to its archrival 3-0 on Friday night. The game against Mexico was just a friendly but it raised all sorts of questions about the team's level at the moment.
BY Brian Sciaretta Posted
September 06, 2019
5:05 PM
IN A GAME THAT was brutal for American fans to watch, the United States fell to Mexico 3-0 in a friendly at Metlife Stadium in New Jersey. While friendlies, by definition, are meaningless poor performances can be both revealing and potentially demoralizing.

This such friendly will leave a bad taste that lingers for a while because the gap between the United States and Mexico hasn’t been further in potentially three decades. It’s easy to point fingers on coaches or certain players, but that is missing the big picture. Mexico is better on just about every level.

The United States looked decent at the start of the game but was quickly found out. It’s easy to blame Mexico’s goals on individual mistakes, but mistakes are bound to happen to a team that can generate little and is constantly on its back foot.

Here are a few brief thoughts on this game


This is a question Gregg Berhalter has to address. Not in a press conference but in actions on the field.

Mexico came into the game intent on pressing the United States and flustering the young American players. It worked. But the big problem is that the U.S. team was insistent on playing out of the back and through the press. It never worked and turnovers constantly led to dangerous Mexican chances.

Everyone wants to play the beautiful game but if a “Route 1” approach can open the game up and lessen the effectiveness of the press, give it a shot. The U.S. team really showed no adjustments in this game and it allowed Mexico to build momentum and confidence. It's much harder to build a system if the team gets pounded in the processes and loses confidence in the end-vision

Players like Gyasi Zardes and Daniel Lovitz haven’t shown to be at this level but they are smaller problems. They will likely fade out as younger players mature into first team professionals. One thing Berhalter is doing is calling in talented players when they prove themselves. There aren’t any obvious misses on this roster. And Berhalter would have called in Adams, Yedlin, Weah, and possibly Holmes if all had been healthy recently.

The big question right now is Berhalter being able to show tactical flexibility and come up with a system that fits the current pool. If the U.S. doesn’t have elite passing central defenders, will Berhalter rely less on a system where this is less required of centerbacks? If the U.S team’s best defensive midfielders don’t exactly fit Berhalter’s model defensive midfielder, can he change the system.

Former USMNT forward Bruce Murray was brutal in his analysis

“If you are getting pressed and not good enough to play your way out by breaking lines then you bang it long and squeeze up to compress the space and the the other  team has no space to play in to. Soccer 101,” Murray said on his Facebook page.  “We are doomed when the coaches think they are going to coach the players to play there way out of full on quality pressure.That's this new version of coaching arrogance. US Soccer types will tell you guys like me don’t get the new way. Rubbish. Playing for Gansler, Lothar and Bora we were put under more pressure than any teams in US Soccer history. I worry that average teams are going to press us to death. It’s on film now.”


This team needs more flexibility in its approach. As ASN’s Jamie Hill succinctly puts it


He wants a QB, but Trapp+Bradley's long passing is snuffed out with a basic press. Plus, they are defensively soft.

Can he live with Adams at DM even though Adams might not be be as much of the Big Switch Master that Berhalter wants?

If not, the system needs a serious re-think


Playing promising young players is exciting for fans to get a glimpse of the future, but this game (like the England and Italy friendlies in November 2018) show that these players have a huge learning curve. Even when they’re playing at big clubs like Schalke, Ajax, or Werder Bremen. When those young players are at these big clubs, they’re surrounded by high level talent and they can easily absorb the youthful mistakes of a player who lacks experience.

With the U.S. team right now, these players are asked to take on far more responsibility than they do at their clubs and their mistakes are more costly on this team because the lack of a veteran presence.

Weston Mckennie and Sergino Dest showed both lapses and a high level of potential but the ability to both realize potential and minimize lapses shows that even for good young players, it takes awhile and a lot of experience to bridge that gap. We’ve seen the past three U.S. U-20 teams be successful at World Cups but the gap between the U-20 level and the senior team is enormous – even while some of the U-20 players are extremely talented.

Ideally, the best way to introduce young players into the system is in smaller clips at a time and gradually fade out older veterans. The problem is that the big developmental gap in U.S. Soccer has led to a poor presence of players which are now in their prime. So the U.S. has been trying to do this en masse.

The trick to handling this massive influx of young players is to do it so that the team can build confidence at a steady rate and not get demoralized. Right now, that is a concern.

Looking ahead to Uruguay


The game against Uruguay will be a challenge but the pressure of playing its biggest rival at home in front of a hostile crowd will be gone. In a sense the pressure will be alleviated in some respects. Mexico was motivated to pound the United States and Uruguay likely won’t play with as much tenacity.

Berhalter is sure to make some changes. Hometown products Josh Sargent and Tim Ream should play a little more. Sebatian Lletget and Jordan Morris looked decent off the bench late against Mexico and will also probably see some minutes.

But the U.S. team will need to show some flexibility in order to make things work. It will also be a challenge for the young players to put Friday night’s poor performance behind them and start afresh.

No one is under any false illusions that there are quick fixes to make the U.S. team competitive again. That should be a long-term goal that is difficult but achievable. The process is now is about building up the team and implementing a foundation to get that long term vision. In that sense the Uruguay game will be more revealing and telling. What did it learn from the Mexico game? How will it both adjust and put the frustrations of such a loss behind it? Those are critical questions at this point and it will tell a lot about the first key steps of Berhalter’s tenure.