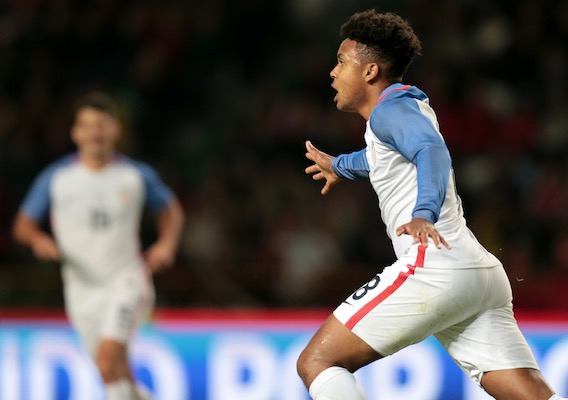 A new generation of national teamers made a good impression against third-ranked Portugal, jumping out to an early lead on Weston McKennie's goal and holding on for an impressive 1-1 road draw.
BY Brian Sciaretta Posted
November 15, 2017
4:00 PM

THE UNITED STATES men's national team began its rebuilding process on Tuesday night with a 1-1 draw against Portugal in Leiria. All things considered, it was a much-needed step in the right direction as many newcomers showed well.

It was interesting to see how individual players responded in light of the negativity after failing to qualify for the World Cup. For the most part, that was positive. Weston McKennie looks as good as advertised. Tyler Adams, Matt Miazga, and Cameron Carter-Vickers also will be getting lots of caps moving forward. While not young, C.J. Sapong might be useful for a few more years.

The bottom line is that the player pool expanded after this game as a result of good efforts. There is a very long way to go, but it was a nice first step and good way to meet some players who will play a lot in 2018.

Ethan Horvath: The Club Brugge keeper entered the game in rough form having lost his starting job at his club. Unfortunately for the Colorado native, he had a poor outing and let in an absolute howler on Portugal’s lone goal. Minutes later, he hit a poor pass up the middle that nearly resulted in a second goal. Overall, he was completely off. Rating: 3.5

DeAndre Yedlin: The Newcastle United right back was pretty sturdy defensively but struggled offensively. His final pass wasn’t there and he wasn’t able to beat many defenders off the dribble. He read the game right but didn’t execute as well as he could. Rating: 5.5

Matt Miazga: A very good game for the New Jersey native who did not put in a bad foot defensively and had good chemistry with John Brooks. The worst that could be said for him is that he committed a silly foul that resulted in Brooks’ set piece header being called back. Rating: 6.5

John Brooks: It was nice to have Brooks back after a long-term injury and the Berlin native delivered with a very strong performance. He held the backline together and made several important stops to halt dangerous Portuguese chances before they materialized. Rating: 7

Eric Lichaj: The Nottingham Forest fullback got the start on the left side despite being mostly a right back. He was steady although unspectacular, which is about as much as you can hope for in an American left back. In the second half he unleashed a tricky shot that forced a nice save. Rating: 5.5

Danny Williams: After being on the outside of the U.S. team, Williams not only made it back for this game but also wore the captain’s armband. Playing in the defensive midfield spot in a 4-1-4-1 formation, he was a steady presence and covered a lot of ground. Rating: 6

Tyler Adams: Earning his first national team cap, the New York Red Bull teenager hustled and worked extremely hard on both sides of the ball. In the first half, he missed some passes but he grew into the game in the second half. His speed and work rate was tough for Portugal to defend. Despite some flaws, he was effective and it was a performance he can build off. Rating: 6.5

Weston McKennie: The Man of the Match for the U.S., and by a healthy margin, he scored his first senior-team goal and hitt a header off the bar. He won ball after ball and displayed great vision for hitting dangerous passes. He will be a huge part of the future. Rating: 7.5

Kellyn Acosta: The FC Dallas midfielder had a nice game doing a lot of the dirty work in the game. He didn’t have many huge key passes from the run of play but he did have a positive influence on the game to help the U.S. earn a draw. Rating: 6

Juan Agudelo: The New England Revolution attacker played out wide where he rarely plays for his club. Overall he struggled and didn’t win many 1v1 dibbles against defenders, nor did he link up well with his teammates. A few positive moments but not a great game. Rating: 5

C.J. Sapong: While being somewhat of a surprise in the starting lineup, Sapong had a good outing and was very effective in the first half—especially holding up the ball. He showed good mobility and assisted on McKennie’s goal. It was a performance that should keep him in the picture for January camp. Rating: 7

Bill Hamid: A huge improvement over Horvath and he provided a steady hand. Rating: 6

Cameron Carter-Vickers: A third teenager to make his national team debut in this contest, Carter-Vickers played very well. He was steady in the back and helped contain Portugal’s best chances. Showed a good range of mobility to help defend some agile attackers who broke loose on the flanks. Rating: 6.5

Jorge Villafana: Villafana replaced Lichaj in the second half and didn’t make any major mistakes but also did not have a huge impact on the game: Rating: 5.5

Lynden Gooch: Replacing Agudelo in the 59th minute, Gooch had a few very good moments that should have been more dangerous. He was tough on Portugal’s fullbacks. Rating: 6

Dom Dwyer: Dwyer replaced Sapong in the 79th minute but was not able to get himself involved. Rating: 5.5

Dave Sarachan: The caretaker manager did a fine job for what could be the only game he will coach the team. For this game alone, he deserves some credit. All the players seemed to come in motivated and he gave three teenagers debuts. A few players, like Agudelo, were not in the right positions but he made some good calls too. Starting Sapong was smart and giving Williams the armband also made sense. If not for Horvath's howler, the U.S. should have won this game. Rating: 6